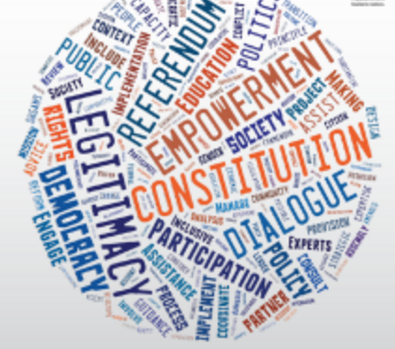 Two thousand sixteen has been a year of extensive constitutional reforms all over the globe. And as in previous years, the Constitution Building Programme of the International Institute for Democracy and Electoral Assistance (International IDEA) has been reporting on these reform processes from around the world. In particular, the Voices from the Field series provided regular updates and detailed analyses on the background, actors, process and substance of proposed or approved constitutional reforms. In this end of year editorial, we look back at some of the trends over the past twelve months.

In 2016, ConstitutionNet published 45 original Voices from the Field pieces on constitutional reform efforts in 40 different countries from all corners of the world, from Africa (13 countries) to Asia (10 countries) to Europe (nine countries), and from the Middle East (four countries) to the Caribbean and Latin America (four countries). These countries constitute around one in five of the countries of the world, a significant number, which in fact does not include many other countries undergoing constitutional reform and covered in ConstitutionNet’s daily news updates (e.g. countries in the Asia Pacific region such as Tuvalu, Solomon Islands). The reforms affected virtually every significant institutional and substantive constitutional aspects, from fundamental rights (Slovenia) to citizenship (Cote d’Ivoire), gender equity (Kenya) to electoral rules and management (Pakistan), federalism (Philippines) and separation of powers (Kyrgyzstan) to emergency and terrorism (France).

Some of these reforms aimed at enhancing democratic competition and electoral integrity (Grenada), inclusive and participatory governance (Kenya) and institutional checks and balances (Albania). Others were less progressive in that they were aimed at weakening separation of powers and boosting individual or party mandates or terms (Hungary, Ecuador, Tajikistan). The experiences in Poland regarding measures to weaken the Constitutional Court exemplify the hazards of leaving to regular and fleeting legislative and political processes crucial details, such as appointment, regarding the Court and other independent institutions. Some of the reforms succeeded (Thailand, Cote d’Ivoire), some were defeated (Italy, Zambia), and many more are still in progress (e.g. Turkey, Sri Lanka, Mali).

A look at some of the Voices from the Field pieces indicates that technical constitutional commissions are becoming common features in countries undergoing extensive constitutional reform processes, although less common in more ‘established’ democracies where regular political institutions dominate reforms. Constitution reform processes are no more undertaken within the four walls of political organs or even the confines of political parties. Nevertheless, the mandate, composition and autonomy of these commissions continues to vary.

While the trend is towards entities that are inclusive of representatives of political groups, prominent individuals, CSOs and other non-state actors (Burkina Faso), in some cases political representatives dominate them (Kyrgyzstan). In some countries, the members of such commissions are exclusively appointed by the executive (Cote d’Ivoire), while in others parliament and other non-state actors appoint some or all of the members (Sierra Leone). The Irish have taken the concept of inclusiveness to a new level with the establishment of Citizen’s Assemblies composed of randomly selected citizens to propose reforms on socially and constitutionally controversial issues.

In some cases, the commissions have limited mandate in relation to specific issues, while in others they work on an entirely new constitution. Furthermore, the extent to which the proposals of such commissions bind or are followed by the political entities charged with approving them varies. On one extreme, in Thailand, the draft constitution prepared by the commission was directly submitted to a referendum, without the approval of the transitional legislative body. In most others, however, the proposals of such commissions must often be approved by the government and/or parliament, which have the power to make changes. Indeed, in Zambia, part of the opposition to the final constitutional reform proposals, which were in themselves progressive, was the rejection of a number of the proposals of the drafting commission by the dominant party.

There is therefore need to look deeper into the theory, practice, sources and consequences of various aspects of these increasingly popular features of constitution building processes.

With the increasing disenchantment with the ‘establishment’ and attending ‘crisis of democracy’, more direct models of decision-making are rising in prominence. Constitutional reform is no exception in this regard. An increasing number of constitutions now recognize ‘popular initiatives’ as one mode of proposing constitutional amendments. The underlying justification is to give people the power to actively set the agenda, shape constitutional rules and dilute the dominance of traditional representative political actors. The experience of Slovenia in this regard is instructive. The popular initiative process was relied on to pump urgency into a faltering constitutional reform process originally led by the legislature to guarantee the right to water and to preclude its commercialization. On the other hand, the Kenyan experience demonstrates the potential of political capture of such processes and the danger of impeding or weakening institutions and the ebbing culture of cross-party compromise necessary for stable and sustainable governance. As Greece and other countries look to boost the place of direct popular engagement in the legislative process, these experiences call for more cautious and thoughtful constitutional engineering to preclude their misuse or abuse.

In addition to the much-reported Brexit and the Colombian referendum, 2016 witnessed several constitutional referendums. Alongside parliamentary approval, referendums continue to be popular modes of endorsing proposed constitutional amendments. Nevertheless, the applicable rules governing constitutional referendums vary. In some countries, a referendum is mandatory to approve some or all constitutional amendments (Mali), while in others referendums only serve as deadlock breaking mechanisms where there is no sufficient consensus in parliament (Italy, Turkey). Some countries establish turnout thresholds (Zambia – 50% of registered voters, Kyrgyzstan 30% of voters), while others impose supermajority approval requirements (Grenada). Because they increase the chances of referendum defeat, these requirements could provide a significant disincentive for proposing constitutional amendments despite government desires (e.g. in Caribbean in relation to abolishment of the British Monarchy). At the same time, they could encourage compromise among major political actors – who would then call for the approval of proposed reforms in unison to enhance the chances of endorsement. In the absence of such compromise, they may fail (Zambia). In addition, in most countries constitutional reform proposals are presented as a package (Italy, Kyrgyzstan). The experience of Grenada, where voters individually vote on each proposed reform, provides a useful comparison.

Considering their continued relevance, and in light of the unfolding practice, the theory and applicable rules governing constitutional referendums is a crucial area that requires further investigation.

The principle of supremacy, and the attendant difficulty of changing constitutions, makes constitutions ideal mechanisms of marking the genuine intentions of adversaries and guaranteeing the prospect of compliance with peace settlements. Indeed, in 2016, constitutional reform was a crucial element of the spectrum of tools in the resolution and sustainable management of conflict. In particular, various forms of territorial autonomy (federalism/decentralization) continue to be the ‘default’ prescription in countries with identity based and territorially concentrated conflicts (Sri Lanka, Mali, Libya). In addition, constitutional guarantees of equitable representation in national institutions are common in peace settlement processes, particularly in cases of conflicts that are not identity based (Colombia). Various models of accommodation of diversity and their constitutional entrenchment are likely to continue to be at the center of peace settlement processes.

2017 prospects: Another exciting year ahead for the world of constitutional building

As fundamental laws outlining the rules of a changing game, constitutions lie at the center of politics and therefore political reform. Constitution building will continue to occupy a prominent position in the coming years. In 2017, we can expect some exciting prospects for constitution building processes. Countries across the world, from South Sudan to Ukraine, Yemen to Turkey, Libya to Sri Lanka, Syria to Guyana, the Philippines to Mauritania, and Georgia to Nigeria are gearing towards undertaking fundamental constitutional reforms. International IDEA and ConstitutionNet will be there to feed the global audience with updates and analyses to make sense of the mishmash of actors, context, processes and substantive issues.

Until then, we wish our readers a marvelous holiday season.

Adem K Abebe is the editor of ConstitutionNet.