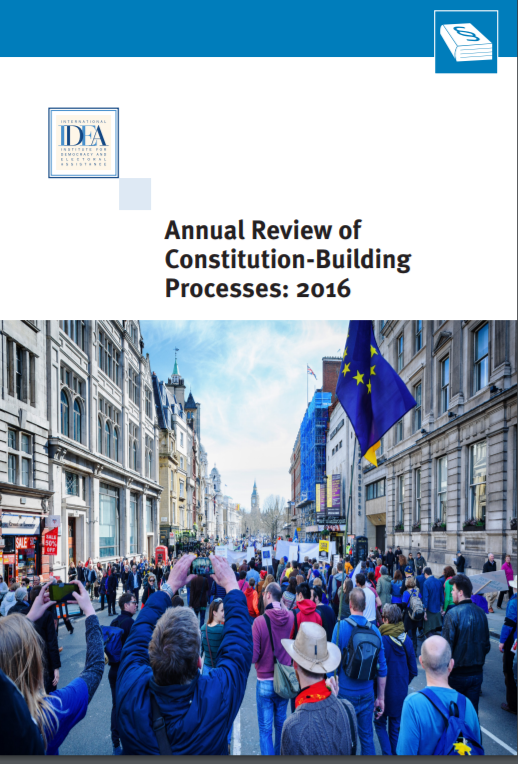 Each year, compiling the International IDEA Annual Review of ConstitutionBuilding Processes provides a reminder of the breadth and dynamism of the modern field of constitution-building, and its centrality around the globe to the issues of democracy, conflict, stability and development. This fourth edition, focusing on events in 2016, provides accounts from 16 countries and covers some of the most regularly debated issues around constitutional design, as well as emerging issues of particular interest at the current time, such as democratic backsliding. These countries and themes represent only a small slice of the constitution-building activity taking place. Our website, ConstitutionNet.org, published original analyses from 40 different countries in 2016.

Backsliding forms the theme of Chapter 1, written by Tom Gerald Daly, which explores democratically regressive developments in Poland and Venezuela. How pervasive this phenomenon is becoming was driven home in the difficulty we had in narrowing the selection of cases to only two, and we look forward to the forthcoming book Daly is writing on the topic.

In Chapter 2, W. Elliot Bulmer analyses the referendums that took place in Italy, the United Kingdom and Zambia in 2016, and develops an interesting idea about the contrast between using referendums to ratify elite pacts as opposed to settling elite disputes.

For Chapter 3 we are delighted to have a contribution from two regular programmatic partners of International IDEA: Markus Böckenförde at the Center for Global Cooperation Research and Michael Meyer-Resende at Democracy Reporting International. Speaking from extensive practical experience around the world, Böckenförde and Meyer-Resende caution against a default to federalism as a constitutional design solution for territorially based conflicts.

Chapters 4 and 5 discuss two issues that have been central to debates on comparative constitutional design for many years—bicameralism and executive–legislative relations, respectively. In Chapter 4, Adem Kassie Abebe describes the debates on establishing or reforming senates in Côte d’Ivoire, Italy and Thailand in 2016, while in Chapter 5 Ellen Hubbard and Sumit Bisarya cover the processes still being debated in Georgia but completed in Armenia, central to which is a move away from a semi-presidential to a parliamentary system of government—a very rare phenomenon worth following in the coming years.

Finally, in Chapter 6 Yuhniwo Ngenge describes the range of constitutional reforms taking place in West Africa, where no less than nine countries initiated major reforms to their constitutions in 2016. The six chapters are dense with country-level detail on the numerous processes described and elucidate some of the key themes that frame constitutional debates around the globe. We are already looking forward to describing the events of 2017 next year, in what will be the fifth edition of the Annual Review of Constitution-Building Processes.