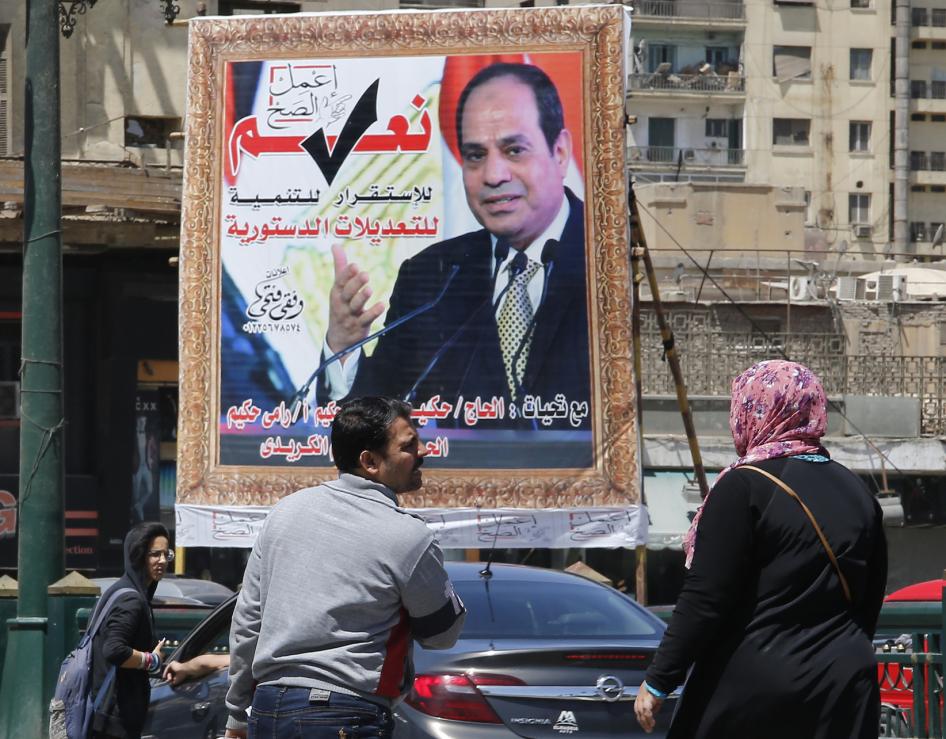 The Egyptian government has just amended the country’s 2014 constitution. The amendments undermine the independence of the country’s judicial branch and dilute the power of elected parliamentarians. They also will allow the current president of Egypt, Abdel Fattah El Sisi, to extend his current term in office and pursue a third 6 year6-year term, likely leaving him to govern the country until 2030. On the whole the amendments are designed to extend and entrench El Sisi’s authoritarian rule. Taken together they weaken the legislative and judicial branches of government vis a vis an already far more powerful executive while enshrining a political role for the country’s armed forces in the constitution. The process of amending the constitution was also deeply problematic. Article 226 of the constitution precludes amending the conditions on reelecting the president except to expand guarantees. Although awkwardly worded, the intention to prevent extending future presidents time in office and returning to a president for life system was clear. Beyond the constitutionality of the amendment to the president’s term being dubious, the deeply repressive environment in which the amendments were discussed and voted on undermines the integrity of the referendum approving the amendments.

The 2014 constitution was written and passed in the wake of the 2013 coup d’état led by then Defense Minister, General Abdel Fattah El Sisi. While the document has many weaknesses, it did make a point of guaranteeing a limited tenure for Egypt’s future presidents. This was in response to Egypt having a history of presidents who reigned until they died or, in the case of Hosni Mubarak who himself ruled for 30 years, were forced from office. Sisi himself had confirmed in interviews that he agreed with the two term limit placed upon his office. That said throughout his tenure Egypt has witnessed an intensification of authoritarian practices as El Sisi consolidated power. Moreover, the parliament has been almost entirely composed of pro-regime MPs who approve virtually every proposal from El Sisi’s government. The move to amend the constitution to extend El Sisi’s tenure was anticipated by many Egypt observers long before the amendments were formally proposed. Indeed, pro-government MPs had voiced their desire to extend his rule over the past few years, in an attempt to suggest that it was the Egyptian people insisting El Sisi continue beyond his constitutionally permitted 8 years, rather than a power grab led by El Sisi himself. Throughout the campaign to amend the constitution, El Sisi was conspicuously silent.

The package of amendments go beyond extending El Sisi’s tenure. The amendment that specifically addresses his time in office is an amendment to article 140 which extends presidential terms from 4 to 6 years in length and a clarifying amendment that extends the term he is currently serving and to which he was elected to last year from 4 to 6 years as well while permitting him to run for a third term, his second 6 year term at the conclusion of this one in 2024. This means that El Sisi, under the latest amendments, could now rule Egypt until 2030; 16 years in total or double the length of time he was constitutionally allowed when he took office in 2014.

The amendments also expand the executive branch’s power vis a vis the judicial and legislative branches of government. In the 2014 constitution, article 185 was limited to delineating the degree of financial independence of the judiciary. With the 2019 amendments the article has been expanded to grant the president the power to appoint the head judges of Egypt’s top judicial bodies. Previously these positions were filled based on seniority with judges managing their own affairs in terms of judicial appointments. The president is allowed to choose the head judges from among the seven most senior judges in each judicial body. They are appointed to terms of 4 years or until they reach the age of retirement (state employees are required to retire at age 60 unless specific exceptions are made – these exceptions are usually for senior military officers who are part of the ruling clique), whichever comes first. A law to a similar effect was passed and signed in 2017, however it appears that a decision was made to write this into the constitution to avoid the possibility that judges would attempt to overturn the president’s expanded authority over them by claiming the 2017 appointments law was unconstitutional.

The Egyptian parliament has largely been a powerless rubber stamp for the president and his government.

A number of amendments relate to the legislative branch. Article 102 was amended to guarantee that at least one quarter of parliamentarians must be women in all future parliaments. New articles, 248-254, add an upper house of parliament, the Senate. According to the new articles this body will be consulted on all constitutional and legislative matters handled by the lower house of parliament. What is notably different, however, is that one third of the members of the Senate are to be appointed by the president, increasing the power of the president over the legislature and diluting the power of elected members of parliament.  While expanding the role of women in government is welcome, it should be noted that, to date, the Egyptian parliament has largely been a powerless rubber stamp for the president and his government. As I’ve noted previously, “in the math of political calculus, 25 percent of zero political power is still zero.”

The role of the military in political life is also now enshrined in the constitution thanks to the new amendments. Article 200 which delineates the mission of the armed forces has been expanded from a role of defending the security and territory of Egypt to one that includes protecting the constitution as well as the rights and freedoms of Egyptians. Ironically it is also tasked now with preserving the “civilian” nature of the state. Aside from establishing its longstanding de facto political role, the amendment to article 204 further expands the power of military courts to try civilians.

Finally, the role of vice president has been added to the constitution. The amendment to article 150 does not require a vice president to be appointed, nor does it grant that office any powers. Rather, it allows the president, should he or she so choose, to appoint one or more vice presidents and assign them whatever roles the president decides. Moreover, the president can appoint and dismiss the vice president(s) without any external oversight from the legislature or judiciary.

These amendments are part of El Sisi’s longstanding effort to consolidate and extend his rule over Egypt and reward the institution upon which he depends for power.

From the outset, the idea of amending the constitution to extend presidential terms and allow El Sisi to serve 3 terms may well have violated Article 226 of the constitution. Moreover, the repressive context in which the amendments took place undermined the integrity of the amendments. When opposition figures sought to launch a campaign encouraging Egyptians to vote against the amendments, they were arrested. The Egyptian press was restricted from sharing with the public any criticism of the proposed amendments to allow them to assess them fairly. A website hosting an online petition against the amendments was blocked, as were multiple mirror sites that sought to allow Egyptians to reach it. During the referendum itself, a lone protestor, Ahmed Badawy, stood with a sign encouraging Egyptians to vote no and was quickly arrested and disappeared. Finally, in an effort to bolster the legitimacy of the referendum, voters were bribed and coerced into voting.

Ultimately, these amendments are part of El Sisi’s longstanding effort to consolidate and extend his rule over Egypt and reward the institution upon which he depends for power, the armed forces. While the supremacy of the presidency and the armed forces was never in doubt before these amendments were passed, they are part of a tradition of legalizing Egypt’s authoritarianism or as one judicial source told Mada Masr, a local independent news site, that the amendments were a way of “constitutionalizing dictatorship.” The amendments, in weakening the judicial and legislative branches of the Egyptian state, effectively add to the fragility of the authoritarian political order that El Sisi has built. A system of government increasingly focuses more and more power on him and, without him, may well collapse.

While the goal of entrenching authoritarianism clearly drove the amendment process itself, the decision to put on a farcical referendum while bribing and coercing many Egyptians to participate may have been designed to impress upon Egyptians the belief that the state holds all the cards and will do what it pleases while forcing them to feign their assent in the process, all as part of the government’s effort to further break the political will of Egyptians and continue to rebuild the wall of fear that was briefly broken in 2011.

Timothy Kaldas is a Nonresident Fellow at the Tahrir Institute for Middle East Policy and a risk consultant. He has been based in Cairo for over a decade. Formerly, he was a visiting professor of politics at Nile University.