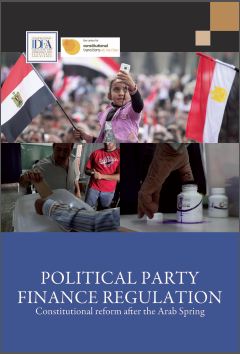 In support of constitution-building activities in the MENA region (e.g. in Libya, Tunisia and Yemen); the Constitutional Transitions Center of the Law School at NYU and International IDEA has prepared a series of thematic,
comparative research reports in English and Arabic, on issues in constitutional design that have arisen in the Middle East and North Africa, and they will be used as engagement tools.

This report: "Political Party Finance Regulation: Constitutional reform after the Arab Spring" is authored by Sujit Choudhry and Katherine Glenn Bass (NYU School of Law) , and Zaid al-Ali (Senior Adviser on Constitution Building at International IDEA) as an adviser of this report. An Arabic version is being prepared also.