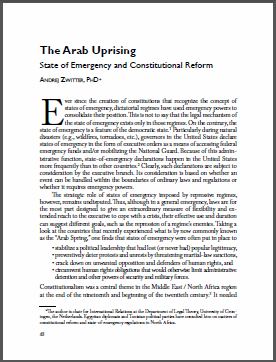 The Arab Uprising - State of Emergency and Constitutional Reform

"Ever since the creation of constitutions that recognize the concept of states of emergency, dictatorial regimes have used emergency powers to consolidate their position. This is not to say that the legal mechanism of the state of emergency exists only in those regimes. On the contrary, the state of emergency is a feature of the democratic state. Particularly during natural disasters (e.g., wildfires, tornadoes, etc.), governors in the United States declare states of emergency in the form of executive orders as a means of accessing federal emergency funds and/or mobilizing the National Guard. Because of this administrative function, state-of-emergency declarations happen in the United States more frequently than in other countries."