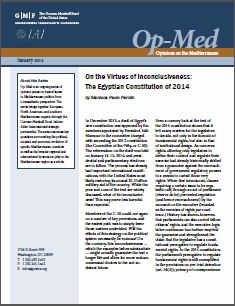 On the Virtues of Inconclusiveness: The Egyptian Constitution of 2014

This is an opinion piece written by Gianluca Paolo Parolin and published by the GMF in the US and the Institute of International Affairs in Rome in January 2014. The title: "On the Virtues of Inconclusiveness: The Egyptian Constitution of 2014".

"Contrary to popular belief, lack of this separation in Egypt has traditionally meant that state authorities encroach on religious authorities, not the other way around."

The author, Gianluca P. Parolin is an assistant professor in the Law Department of the American University in Cairo, Egypt; adjunct at Cairo University;and visiting at the Pontifical Institute for Arabic and Islamic Studies in Rome. He has also been a global fellow at New York University Law School, and visiting associate at Tokyo University of Foreign Studies.