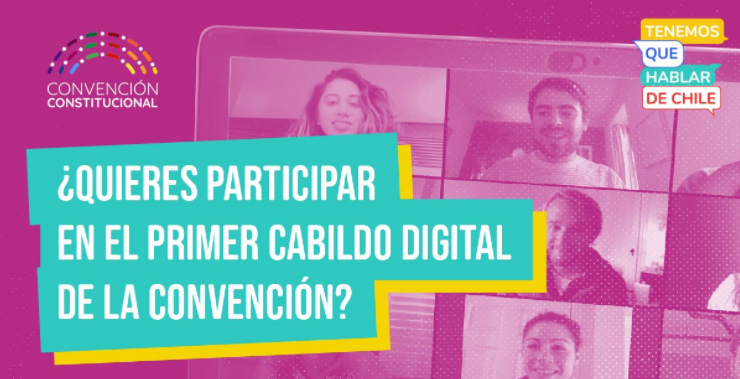 Befitting the spirit leading to its creation, the Chilean Constitutional Convention has instituted multifaceted and innovative mechanisms of public participation. Time constraints, lack of budget, and unequal access to internet may, however, undermine the accessibility of these initiatives. Nevertheless, the Convention must ensure widespread civic education and meaningful public participation, including of historically marginalized peoples, to ensure the legitimacy of the process (and the resulting draft constitution that will be put to referendum) – writes Dr. Claudio Fuentes

A central feature of the constituent process in Chile is the commitment to broad-based and multifaceted public participation in the process leading to the new Constitution. In this piece, I explain several institutional mechanisms created by the Convention to enhance public participation. Nevertheless, I caution that time constraints and the Covid-19 pandemic may negatively affect public engagement, making participation tools disproportionately accessible to only educated and well-organized citizens. Perceptions of elitism may be an unintended consequence, skewing the results of public participation and undermining the very heart of this process.

The outburst of social protests in 2019 came not just from a call for better living conditions but also a demand for political inclusion. One of the key features of the constituent process is the establishment of descriptive representation including gender parity, reserved seats for indigenous people, and the possibility for independent groups to organize in lists to compete for seats at the Convention. This led to a historically unparalleled representative constitution-making body in terms of gender, ethnicity, regional diversity, age, and socioeconomic background.

— Public hearings. Events at which the Convention can receive proposals and listen to experiences and testimonies from individuals and organizations on matters of interest to the plenary and thematic committees. Up to December 2021, the thematic committees received hundreds of experts and citizens bringing their ideas and proposals to the Convention. As expected, most requests for public hearings were for the Fundamental Rights Committee.

— Public constituent hearings. Periodic meetings in which individual or groups of Convention delegates give an account of the progress of the work of the Convention to people in different regions of the country. At these meetings, delegates listen to and take note of the opinions of citizens on issues within their area of their competence. During the year of sessions, convention representatives will have at least eight “territorial weeks” in which they must engage with citizens in their districts to report on the Convention’s progress and to encourage engagement with the public participation mechanisms. The Convention recently voted to suspend upcoming territorial weeks from February to April; instead, there will be territorial weeks in May and June to disseminate the proposed constitutional text.

— Citizens’ initiatives. Mechanism that allows people or groups of people to present proposals for a constitutional article. Initiatives that have 15,000 signatures from at least four different regions of the country must be discussed by the Convention. Up to mid-January 2022, more than 220,000 people have supported 2,486 initiatives introduced by citizens in seven thematic areas. 993 initiatives were proposed concerning fundamental rights, 452 concerning the political system, 299 concerning the environment, and 267 concerning decentralization, territorial justice, and local government. Up to 16 January, 10 initiatives gained enough support to be discussed by the Convention, including proposals concerning education, reproductive and sexual rights, autonomy of the Central Bank, nationalization of mining companies, and protecting individual pension savings, religious freedom, and animal rights, among others.

— Nationwide deliberative meetings. Public meetings will be carried out throughout the country. The Technical Secretariat for Public Participation of the Convention will organize a schedule of discussions covering specific themes addressed by the Convention. At least one national meeting is expected in March-April 2022.

— Local Town Hall meetings. This is a mechanism for dialogue and deliberation convened by the Convention and implemented by local authorities, regional governments, state universities or other public entities through collaboration agreements. Meetings are expected to take place in January, March, and April 2022.

— Self-convened meetings. Meetings self-convened by citizens to deliberate on and generate proposals for the Convention. The Convention will receive and systematize the results of these meetings for discussion in thematic committees.

— Indigenous consultation mechanism. The Convention will convene a consultation open to the indigenous peoples of Chile. A Committee on the Rights of Indigenous Peoples and Plurinationality was established to enact this initiative. The Committee will organize public hearings to receive proposals and indigenous people or organizations may self-convene meetings in order to advance proposals to the Convention by March 2022.

The Convention established a Committee on Popular Participation that has its own technical secretariat. This body is responsible for generating the conditions for citizen participation (for example, the digital public participation platform for popular initiatives), as well as developing the methodologies for such participation. In addition, the Committee on the Rights of Indigenous Peoples has established a technical secretariat that will implement the indigenous peoples’ consultation. These entities have faced some budget and time constraints that may affect the impact of social participation in the process. All the citizens’ proposals had to be submitted by 20 January to be included in the deliberation by the thematic committees within the Convention. The Secretariats need to develop feedback mechanisms with citizens in order to ensure public participation is reflected in the Convention’s discussions and final decisions.

The challenges of public participation in unequal societies

Participatory mechanisms are subject to several challenges. First, mechanisms of participation had to be implemented in the early stages of the process as the thematic committees were going to debate the specific content of the new Constitution between February and April 2022. Thus, time restrictions limited participation to three or four months (from December 2021 through March 2022). Second, there is a lack of information on the process of writing the constitution since there are no public television or national radio programs broadcasting and/or covering the Convention. All sessions of the Plenary and Committees are actually broadcast through YouTube, but this is not as widespread or accessible as content on TV channels. Most information circulates through social networks (in particular, Twitter, Instagram, and Facebook), reducing the scope of participation to those people with access to such tools (mostly well-informed, educated people). Third, the current Covid-19 pandemic impacts the possibilities for in-person meetings concerning the constitution, greatly affecting people who live in rural areas. Finally, as most initiatives require access to the internet, this has a discriminatory impact on people who tend not to have internet access, including people in rural areas, poor communities, people with disabilities, and the elderly. Thus, all these factors are reducing the potential impact the constituent process may have in bringing greater levels of civic engagement in all the mechanisms of participation created by the Convention.

Overall, citizens have great expectations about the work of the Convention, but they do not feel well-informed on the main issues debated by this body.

In a context of high levels of socio-economic inequality, conducting a constituent process that will re-define important rules of the game is quite a challenge, particularly in the context of an outgoing right-wing government that at least initially did not provide strong financial and technical support to the Convention. While there were great hopes for a highly inclusive process that would also give voice to those that have been historically marginalized, it is a fact that the more organized and powerful groups of society have had greater opportunities of agenda setting as they have more access to mass media and to technical support to advance their own agendas.

However, some of these conditions are likely to change as a new left-wing government will take power in March 2022. It is very likely that the Convention will receive more attention and administrative support by the new government. The Convention must have a draft by early July 2022, and then citizens will be called to approve or reject the new Constitution in September 2022. Thus, between July and September Chile will experience a new moment of political and social polarization as the debate about the new Constitution will divide Chileans between those who will support the new text and those who will prefer the status quo. A well-informed decision will require an intense mass media campaign to address key issues of a complex but crucial nature.

A final note concerning the Chilean experience of participation is related to fake news. As in many countries, Chile is experiencing a wave of well-organized negative campaigns that have had an enormous impact on political and social deliberations. Citizens are exposed to hundreds of pieces of fake news concerning the Convention, the political process, and the impact of certain decisions. How can the Convention and the political system deal with this new trend, and what impact will fake news have on the process? Further, what is the role of mass media and civil society in combatting disinformation? Concerning this subject, I have more questions than answers, but in analysing the constituent process in Chile, fake news is a crucial subject, for which we do not have adequate safeguards. As social media and the misuse of information are a relevant subject impacting the Convention’s work, it is very likely that the Convention will consider substantive provisions relating to the protection of privacy and reputation and regulating the media.

It remains to be seen whether the Convention’s robust commitment to public participation will live up to expectations.

It remains to be seen whether the Convention’s robust commitment to public participation will live up to expectations, especially considering time constraints, lack of budget, and unequal access to internet (especially important when the participation mechanisms moved online during Covid-19). Focus group results show that people’s main fear is that the new constitution will be drafted by “the same old people”—political elites. Public participation, including of historically marginalized peoples, is therefore essential to build the legitimacy of the process (and the resulting draft constitution that will be put to referendum).

Claudio Fuentes has a Ph.D. in political science (UNC Chapel Hill) and is a professor at the School of Political Science at the Universidad Diego Portales. He is the coordinator of Plataforma Contexto, an initiative to promote civic engagement in the constituent process in Chile.