Where the Rubber Meets the Road: Chile’s Constitutional Convention Decides its Rules of Procedure 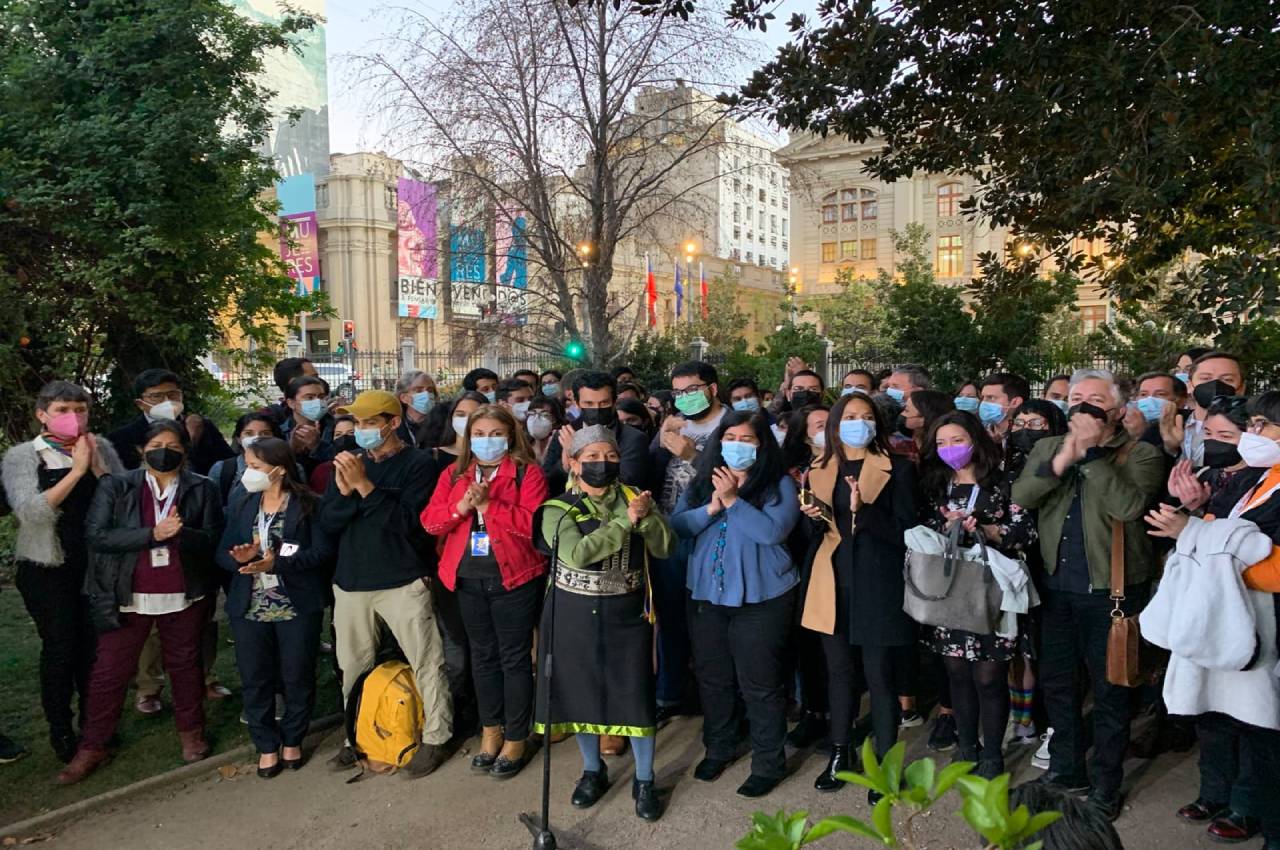 The president and vice-president of Chile's Constitutional Convention give an account of the first day of voting surrounded by Convention members (photo credit: Twitter / @josefina_delaf)

The May 2021 election for Chile’s 155-member Constitutional Convention was a surprise landslide for independent and left-leaning candidates. In total, 67% of the Convention has no political party affiliation, with many belonging to left-leaning social movements. The right-wing coalition obtained only 37 seats, 20% of the Convention members, far from the one-third needed to block proposals. The center-left obtained 25 seats, and the left 28. 17 seats were reserved for indigenous peoples.

In mid-September, nine weeks after beginning its work, the plenary of the Convention began voting on its internal regulations. This brought relief to those who feared that discussion over the rules of procedure could take months (as happened in Bolivia) and, given the Convention’s limited term, would jeopardize the project of constitutional replacement. According to Law 21,200 – an amendment to the 1980 Constitution that regulates the process – the Convention must produce a new Constitution within nine months, with a maximum extension of three months. This law also establishes a quorum of two-thirds of the Convention members to approve the voting procedure as well as the provisions of the new Constitution.

Several experts have noted that, in democratic processes, procedural rules have a major impact on the outcomes of the process.

Several experts have noted that, in democratic processes, procedural rules have a major impact on the outcomes of the process. The Chilean Constitutional Convention’s rules of procedure, which may seem at first glance to be a dry, bureaucratic issue, are indeed of great political relevance. The rules of procedure are expected to define the thematic committees, voting procedures, and participatory mechanisms at the Convention, among other things.

Implicit in the debates about the rules of procedure lies a deeper question that permeates the entire constitution-making process: how “sovereign” is the Convention? Is it the embodiment of an unlimited constituent power or is it an institution like others, with a specific and limited mandate authorized by Congress and the President? Will the Convention respect the limitations established by the political agreements and constitutional reforms that gave birth to it, or attempt to exceed its formal power? How does the Convention relate to the social movement, on the one hand, and to political parties, on the other, involved in its creation?

The road towards the rules of procedure

The day chosen for the Constitutional Convention’s inauguration was 4 July 2021, commemorating the first National Congress in 1811. The ceremony had to be suspended several times due to nearby clashes between protestors and the police. Finally, on the evening of 4 July, the 155 elected Convention members accepted their new office and appointed Elisa Loncón, a Mapuche representative and professor of linguistics, as president, and constitutional law professor Jaime Bassa as vice-president.

The first days of the Convention were marked by the failure of the current government administration to provide for basic infrastructure, a duty established by law, which forced the cancellation of sessions and prompted other institutions, including public universities, to offer assistance. This caused a tense relationship between the presidency and the Convention. The embarrassment ended in the resignation of the Executive Secretary of the Administrative Unit of the Constitutional Convention, Francisco Encina, who was replaced by former minister and defeated candidate for governor of Santiago, Catalina Parot. The new Executive Secretary, however, had a cold reception at the Convention, as some members rejected her unilateral appointment by the Chilean President. Parot resigned after only 33 days in office citing “personal reasons.” The difficulties continued when, in September, the budgetary office of the government rejected an increase of the budget requested by the Convention. These interactions show a continuous arm-wrestle between a government that seeks to give the constituent body the status of an office of the administration, and a Convention that claims an autonomous right to self-determination.

Debates on issues not necessarily related to the rules of procedure or the new constitution illustrate the delegates’ divergent understandings on the scope of their roles as representatives.

The first declaration of the newly created body, approved with 105 of 155 votes, was a petition to Congress and the President to pardon or give special consideration to those arrested during the October 2019 protests, and to those imprisoned due to the conflict in Mapuche territory, in the south of the country. These requests were criticized by some political actors, especially those on the right, who considered the requests as exceeding the mandate of the Convention. Others argued the petition was a natural first step by a political body that emerged from social unrest and mobilization, which at times resulted in violent clashes between protestors and the police or military (resulting in accusations of significant human rights violations). These debates on issues not necessarily related to the rules of procedure or the new constitution illustrate the delegates’ divergent understandings on the scope of their roles as representatives.

To address the Convention’s internal regulation, at the end of July the Convention organized its work into eight transitionary committees: rules of procedure; ethics; budget; human rights; communication and information; indigenous participation and consultation; popular participation and territorial equity; and decentralization, equity and territorial justice. The committees were given 30 days to prepare a report and the Rules of Procedure Committee was in charge of systematizing all the other committees’ reports in order to present their proposals to the plenary.

The transitionary committees received over a thousand requests for public hearings from international organizations and Chilean civil society, including social organizations, unions, private associations and universities. The Rules of Procedure Committee alone received 120 organizations in meetings that were recorded.

The debate over the rules of procedure was not without controversy. The transitionary committees included in their reports a very broad scope of issues, some of them deemed “substantive” rather than “procedural”, and some not directly related to the Constitution. For example, the Human Rights Committee proposed the abolition of the Carabineros police force and its replacement. It also recommended lifting the 50-year classified period of testimony gathered by the Valech Commission, which documented torture under the Pinochet dictatorship. These proposals were not included by the Rules of Procedure Committee in the final draft submitted to the plenary.

Also controversial were proposals to circumvent the two-thirds vote requirement established by Law 21200 to approve the substantive provisions of the new Constitution. This idea had the support of some left-leaning, independent Convention members and the Communist Party, which did not sign the 15 November 2019 agreement among political party leaders that began the process. This agreement binds its signatories to the supermajority rule, which was negotiated on the agreed basis of drafting the text from a “blank slate” and not as an amendment to the 1980 Constitution.

The two-thirds majority requirement – to approve voting procedures and quorums at the Convention – was originally a request of the political right.

The two-thirds majority requirement – to approve voting procedures and quorums at the Convention – was originally a request of the political right. This quorum was meant to ensure that the rules of procedure would not be able to change the supermajority voting requirement established for approving constitutional provisions. This design, however, assumed the right would be able to achieve the 52 votes necessary to block proposals by the left and center-left. The surprising result of the May 2021 Constitutional Convention election, however, where only 37 right-wing representatives were elected, gave this provision a completely different meaning.

Paradoxically, given the fragmented and left-leaning composition of the Convention, the two-thirds vote required for approving the rules of procedure could potentially grant the left an opportunity to veto the two-thirds supermajority requirement to approve constitutional provisions, a rule that is accepted by the right as well as the center-left, especially in light of the electoral results in May.

The rules of procedure draft generally approved on 14 September established a simple majority threshold for the rules dealing with voting at the Convention. The simple majority requirement better guarantees the maintenance of the two-thirds vote for approving constitutional provisions, as it is less susceptible to rejection or veto from the left. This simple majority norm gathered the support of around 90% of the Convention, even if it seems to contradict one of the aspects of Law 21,200.

What is in the rules of procedure?

The first version of the general rules of procedure, as approved by the plenary, is a 40-page document with 110 articles. Its first article defines the Constitutional Convention as representative, with parity and plurinational, reflecting its unprecedented composition of 77 women and 78 men, and the 17 reserved seats for representatives of indigenous peoples. It declares itself autonomous and summoned by the people of Chile to exercise constituent power. The Convention recognizes that sovereignty resides in the Chilean people and that it is mandated to draft a proposal for a Constitution and approve it, which will then be submitted to a national plebiscite for approval.

After setting the principles that guide the working of the Convention, with a focus on rights and inclusion, the document details the rules for transparency, procedures for debates, and voting mechanisms. It establishes a Board of Directors, composed of the president and vice-president of the Convention, plus seven joint vice-presidencies, emphasizing gender parity and indigenous representation in all bodies established by the rules of procedure.

The rules of procedure propose seven thematic committees, which in turn can work in subcommittees. These are:

It then details some of the issues each of these committees is expected to consider. Once a final draft of the new Constitution is proposed, a harmonization committee will revise the collated proposals to prevent inconsistencies. It will also review deficiencies in legislative technique, omissions, grammatical errors, and further propose to the plenary the suggested order of provisions and structure of sections and chapters. Its recommendations will not be binding on the Convention.

The rules of procedure consider public hearings for citizen participation, similar to those existing in the legislative process. They also command certain sessions take place outside of the headquarters of the Convention, in Santiago. Article 94, on the approval of constitutional provisions, establishes that the plenary will approve provisions by two-thirds of the Convention members in office.

The work of the Constitutional Convention has already engendered heated public debate and a few scandals, such as when a Convention member falsely claimed he had cancer. However, polls show general popular support for the Convention, in sharp contrast to Congress and political parties.

The 155-member assembly has managed to surmount initial difficulties and is quickly moving forward with the approval of its rules of procedure. Once this first step is complete, the substantive work of writing a new Constitution will begin. The gender, ethnic, territorial and socioeconomic diversity of the Convention, unseen in any other representative body in Chile, may explain its higher legitimacy and credibility as compared to other political institutions. It also suggests that its substantive provisions will attempt new levels of inclusion in the future political system.

Claudia Heiss is assistant professor at Universidad de Chile’s Institute of Public Affairs and adjunct researcher at the Center for Social Conflict and Cohesion Studies.