Menu
Back to country selector
Constitutional history of
Myanmar

The Republic of the Union of Myanmar is a country of an estimated 60 million people in Southeast Asia bordered by China, Thailand, India, Laos and Bangladesh.

Myanmar gained independence from the British Empire in 1948. Initially, it had a democratic system, but following a coup in 1962, a military government was established. The military regime suppressed almost all dissent and was accused of violating human rights, resulting in international isolation and sanctions. In 2011, the military relaxed its grip on the nation by allowing for the formation of a civilian government led by President Thein Sein. Since then, piecemeal reforms have been introduced as part of a gradual transition to a more democratic framework, albeit under the stewardship of the military (Tatmadaw). These reforms resulted in the release from decades of house arrest, and subsequent election of opposition leader Aung Sung Syu Ki into parliament, as well as proposals to reform the constitution.

Myanmar’s first Constitution as an independent country was written in 1947 when the British government and the interim government of General Aung Sung reached an agreement on full independence from Britain.

The new constitution provided for a bicameral legislature with a Prime Minister and cabinet. Non-Burmese areas were organized as the Shan, Kachin, Kayin, Kayah, and Chin states; each possessing a degree of autonomy. However this arrangement was not always accepted by all the parties In fact, when Burma’s independence was being negotiated, ethnic minorities had expressed their desire for full independence from the rest of Burma. The decision to finally merge with Burma was conditioned on strong federal arrangements being put in place. However, the 1947 Constitution provided only for a weak form of federalism, although it did include a right to secession for three ethnic minorities after ten years. However, the military’s intercession in government from 1958-1960, and again from 1962 prevented any activation of this right and changed the course of the country.

In 1972, General Ne Win and other top leaders resigned from the military and overthrew the constitutionally elected civilian government in a coup. Ne Win established a Revolutionary Council, made up of military leaders who ruled by decree. The Revolutionary Council conducted a referendum to endorse a new constitution, approved by over 90 percent of the voters in a process whose fairness was questions by international observers.

The 1974 constitution defined Myanmar as a socialist democracy. It also provided for a unicameral legislature and section 11 prescribed that the state shall adopt a single-party system. Consequently, the Myanmar Socialist Party became the only legally recognized political, party dominating all the three separate branches of government. The right to secession was not included.

In 1988, anti-government protests resulting from economic strife and ethnic tensions led to the resignation of General Ne Win. A new Military command —the State Law and Order Restoration Council (SLORC)—took over and promised to hold democratic, multi-party elections. In June, 1989, the military government officially changed the name of the country from Burma to Myanmar.

Elections in 1990 gave Aung Sang Suu Kyi ‘s opposition National League for Democracy (NLD) 392 out of 485 parliamentary seats (80 percent of seats), while the military-backed party, the National Unity Party (NUP), won just 10 seats. However, , the junta invalidated the results, placed the NLD leader under house arrest and transformed the existing assembly from a legislative body into constitution drafting body.This Constitution was eventually promulgated in 2008.

The design of the Constitution was managed by the military junta. Only drafts prepared by the military were presented to the assembly for deliberation. The results announced by the regime showed an overwhelming majority vote for the constitution but there were numerous reports that the ballot papers were marked by state officials, regardless of the preferences of the voters.

Structure of Government under the 2008 Constitution

The 2008 Constitution of the Republic of the Union of Myanmar provides for a system of government in which the President is elected by an electoral college formed of three groups of parliamentarians, a bicameral legislature with the second house representative of states and regions, the government is appointed by the President and only formally ratified by parliament, and both president and the cabinet can only be removed through impeachment. The country is divided into a series of Region and States, as well as “self-administered” areas and Union territories. The government consists of both Union and state/regional governments, with schedules of powers allocated to each.

All executive power is vested in a president who is elected by Parliament. The president can be removed by impeachment proceedings which cover more than moral or legal culpability.

Of note, Article 59 prohibits anyone with foreign nationality or relatives from running for President. This effectively excludes opposition leader Aung Sung Suu Kyi of National League for Democracy (NLD) whose children and deceased husband are British citizens.

The president chairs several important bodies. Two are of particular importance: the National Defense and Security Council and the Financial Commission for recommendations on the budgets of the union and states/regions. They can potentially influence the conduct of parliamentary elections through provisions that let him appoint all members of the Myanmar Union Electoral Commission.

Parliamentary power is dispersed. There are legislative structures for the Union, States or Regions, Self-administered Zones or Divisions, the Capital Territory and possibly other Union territories. Members elected into each of these legislative structures all have a five year mandate. The Union legislature, known as Pyidaungsu Hluttaw, is bi-cameral. One House represents the people and townships and is called Pyithu Hluttaw and the other represents the states and regions and is called Amyotha Hluttaw. In each House 25% of members (110 out of 440 in the Pyithu Hluttaw and 56 out of 224 in the Amyotha Hluttaw) represent the Army or Tatmadaw as it is called. These members are appointed by the Commander in Chief.

At the apex of the ordinary courts is the Supreme Court (which is the only ordinary court at the Union level). Each state and region has a High Court, while self-administered areas, townships and districts have their own courts. There is no judicial service commission to appoint or dismiss judges.

The military plays a central role in Myanmar politics. The Constitution effectively provides a separate regime for it with special privileges, immunities and representation in state institutions, such as the legislature, as seen earlier. Also, unlike in many countries where the head of the executive is normally the commander in chief of the armed forces in line with the principle of civilian control of the army, the President in Myanmar is not the Commander in Chief of the army. This position is retained by the military who effectively displaces the President in times of national emergency threating national unity. The National Defense and Security Council, dominated by the Tatmadaw, exercises important policy and executive functions.

Since the passage of the Constitution, there have been significant reforms in the economic and political spheres, including allowing the NLD to compete in the 2012 election, where it won 43 out of 44 parliamentary seats contested, and the release of Aung San Syi Kyi from house arrest.

On 25 July 2013, the Lower House of Burma’s parliament approved the formation of a committee to review the 2008 Constitution to make necessary amendments. The Committee submitted its report to Parliament on 31 January 2014, following which the Parliament formed an “Implementation Committee” to prepare a constitutional amendment bill no later than six months before the 2015 elections.

Opposition groups have pointed out that changes are needed in the Constitution to form a genuine federal union and resolve ethnic and political conflicts in the country. Opinions vary as opposition leaders have called for comprehensive constitutional reform, while those in government have insist on partial amendments rather than a complete replacement.

Simultaneously, the government is engaged in a series of peace negotiations with various armed groups in ethnic states and regions. The outcome of these negotiations is likely to affect the constitutional framework for federalism, with a key demand for peace being more local autonomy.

Voices from the field

MyConstitution supports partners in Myanmar to strengthen their expertise on constitution building with a view to building a home-grown, well-informed, and inclusive constitutional culture. 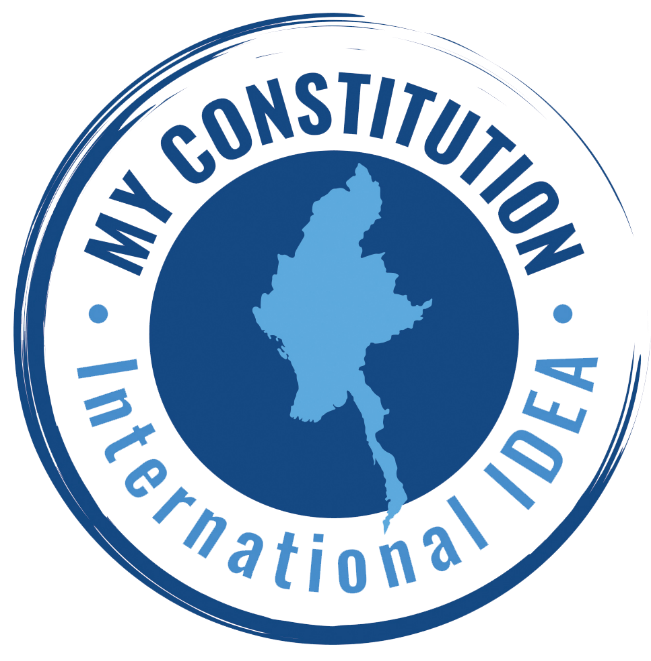