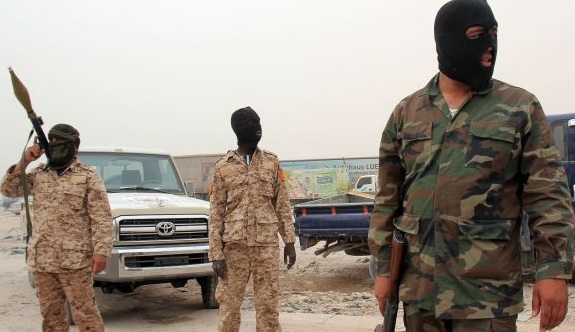 On May 18, leaders of the so-called ‘Libyan National Army’ stormed the country’s acting legislature, the General National Council (GNC) and declared it dissolved. In their statement, they purported to transfer the GNC’s powers to the Constitutional Drafting Assembly (CDA) of sixty until a permanent body is elected to replace it. It has to be recalled that the CDA or C-60, as it is also called, was elected in February with the sole purpose of drafting a constitution. The LNA’s action, apparently, was a response to the GNC’s decision on May 4 to appoint a new Prime Minister, Ahmed Maetig, in place of Abdullah Al-Thanni.

Bolstered by three advisory opinions from Libya’s Directorate of Law—one of three independent judiciary bodies—to the effect that Maetiq’s appointment was based on illegal procedures, Al-Thanni has refused to step down. On June 2, Maetiq seized the Prime Ministerial building with the help of some troops, leaving the two parties in direct conflict. How this plays out is now a matter for the Supreme Court, which has been asked to determine the legality of Maetiq’s appointment.

The events of May 18 are a culmination of unstable political developments plaguing Libya’s troubled transition. Calls for the GNC to step down began as far back as February. Many contend that the body had failed to meet its objectives of electing a Constituent Assembly and of ensuring the promulgation of a new Constitution within the time frame set out in the Constitutional Declaration of 2011. The GNC resisted these calls, arguing that it was not solely to blame for delays in the drafting of the constitution. Instead, it issued a new ‘road map,’ extending its deadline to December 24, 2014.

In addition, the LNA—which appears to be connected to the controversial General Khalifa who has raged military operations against Islamists under the code name of Operation Dignity – has also accused the GNC of failing to stabilise the security situation, rebuild the security institutions, or maintain stability in the Interim Government. Many of Libya’s top political elites share this view.

“The situation in Libya will only be cleared up if the GNC is dissolved and the constitution-drafting committee is given the mandate to carry out some of its functions,” former Prime Minister Ali Zeidan told Deutsche Welle’s Arabic Network in an interview. This opinion is shared by others such as the Interior Ministry and Mahmoud Jebril, also a former Prime Minister.

How these unfolding events impact the democratic transition in general and the constitution drafting process in particular must be the question every Libya Watcher is asking.

Prime Minister Ali Zeidan, it must be recalled, was fired in February by the GNC and replaced  with Abdullah Al-Thanni, who himself only lasted a little over three months until his replacement by the GNC on May 4. As such, the LNA’s actions can be seen as motivated partly by the desire to have a new body that will ensure stable governance and prioritize reform of the army and security institutions. But is the CDA, their alternative to the GNC, the appropriate institution for these tasks? Unlikely so.

One obvious reason for this is that the CDA was elected with a constitution building rather than a governance mandate. Taking over the responsibility of governance would drag it into every day politics—something which many Libyans expressly voiced their views against during the CDA elections. In fact, due to their aversion toward partisan politics witnessed within the GNC, many Libyans made a point during the CDA elections not to vote for any candidate with political affiliations. Consequently, candidates had to demonstrate proof of political non-partisanship. It follows that in as much as Libyans may want an alternative to the GNC, the CDA does not appear to be their preference to fill that gap, as they prefer it stays above ordinary politics to focus on the Constitution. The LNA is therefore unlikely to garner broad support for its decision to give it governance responsibilities.

Related to this is the need to preserve the institution’s autonomy. The CDA’s neutrality in the transition process is likely to be compromised were it to become involved in the politics of governance as well.

Further, the LNA’s belief that the CDA can actually resolve Libya’s security issues, including that of rebuilding the institutions, is a bit misguided. The Islamist militias against whom they have been fighting remain heavily armed and unlikely to be crushed easily. In addition, LNA’s campaign is not necessarily supported by all Libyans, not even Al-Thanni. Many think that the LNA’s operations indiscriminately target Islamists, without distinguishing between genuine pro-democracy revolutionary Muslims, and extremist groups like Ansar al-Sharia. The latter has been characterised as an anti-democratic, pro-Sharia and even a terrorist organisation that targets everything and everyone non-Muslim. A very well-thought strategic approach that is palatable to both the LNA’s supporters and its detractors is therefore critical— especially if security and freedom from terrorism, also underlying objectives of any democratic and constitutional order, are to be realised.

Undoubtedly, were things to proceed as the LNA envisages, this would not be without impact on the transition process in general and constitution drafting process in particular.

Firstly, the CDA needs to stay focused on writing the constitution if it is expected to produce something that meets popular expectations. Getting into the messy business of governance, beyond compromising its autonomy and neutrality, will distract it from a job for which it has very limited time.  According to the Constitutional Declaration, the CDA must finalise the Constitution within 120 days of its first meeting. This first meeting occurred April 21, giving the body until August 19 only to complete the process. This is a very short time frame, which the CDA cannot afford to spend steering the ship of governance or seeking solutions to Libya’s complicated security issues.

Fortunately, the CDA seems to be well aware of these challenges. In a statement released on May 23 in which it outlined its achievements, the CDA sought to assert its independence by declaring that it is an autonomous institution elected by the people and answerable to no other authority except God and the Libyan people. It sent this message again a week later, on May 27, when it rejected an invitation from the Supreme Council for the Judiciary to join a mediation committee to resolve the conflict over the political leadership. Does this, however, mean it can manage to stay above the political fray, regarding in particular, stepping into the GNC’s shoes? As seen, the consequences of the CDA meddling in politics would likely be disastrous for the constitutional transition process. What, then, will be the reaction of the LNA and other top members of the political class who saw this as their preferred solution? Complicating the situation further is the fact that the LNA has now threatened to prevent elections for the GNC’s successor, scheduled for June 25. If it acts on this threat, what other alternatives are available? It is possible that the LNA might contemplate a direct takeover of state affairs? Such action would be interpreted as an outright coup, but what is the probability that it will go down this route? There are no easy or clear cut answers to these questions, but one thing they do convey is that the reality on the ground makes the CDA’s job an extremely difficult one.

[1] Suliman Ibrahim is Assistant Professor of law at Benghazi University. The views expressed are solely the authors and do not reflect the position of International IDEA