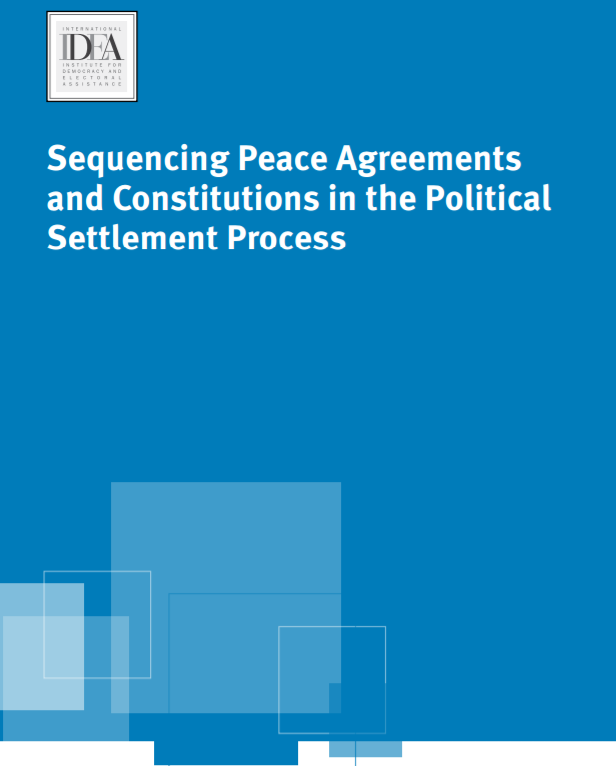 Sequencing Peace Agreements and Constitutions in the Political Settlement Process

This Policy Paper focuses on issues of sequencing in political settlement processes where there is violent conflict. Negotiated transitions from conflict typically involve a formal peace deal and a new or significantly revised constitutional arrangement. These arrangements attempt to establish an agreed power map between elites that (a) details how the political and legal institutions will hold and exercise power and (b) serves as a new social contract to underpin the state. The aim of this power map is to enable the parties to the conflict to move away from violent conflict by reaching a new political settlement.

The paper aims to address the gap in the constitution-making and peacebuilding literatures regarding descriptive and normative accounts of the relationship between peace agreements and constitutional arrangements in political settlement processes. It explores the sequencing of peace deals and constitutional arrangements in order to better understand when (and why) sequencing does not follow the logical model, and the implications for any coherent and workable constitutional framework. This report is an initial exploration of these issues, intended to provide initial recommendations and trigger further deliberation. In doing so, it draws on deliberations at a December 2015 workshop entitled ‘Constitution Building in Political Settlement Processes: The Quest for Inclusion’ (International IDEA 2016).