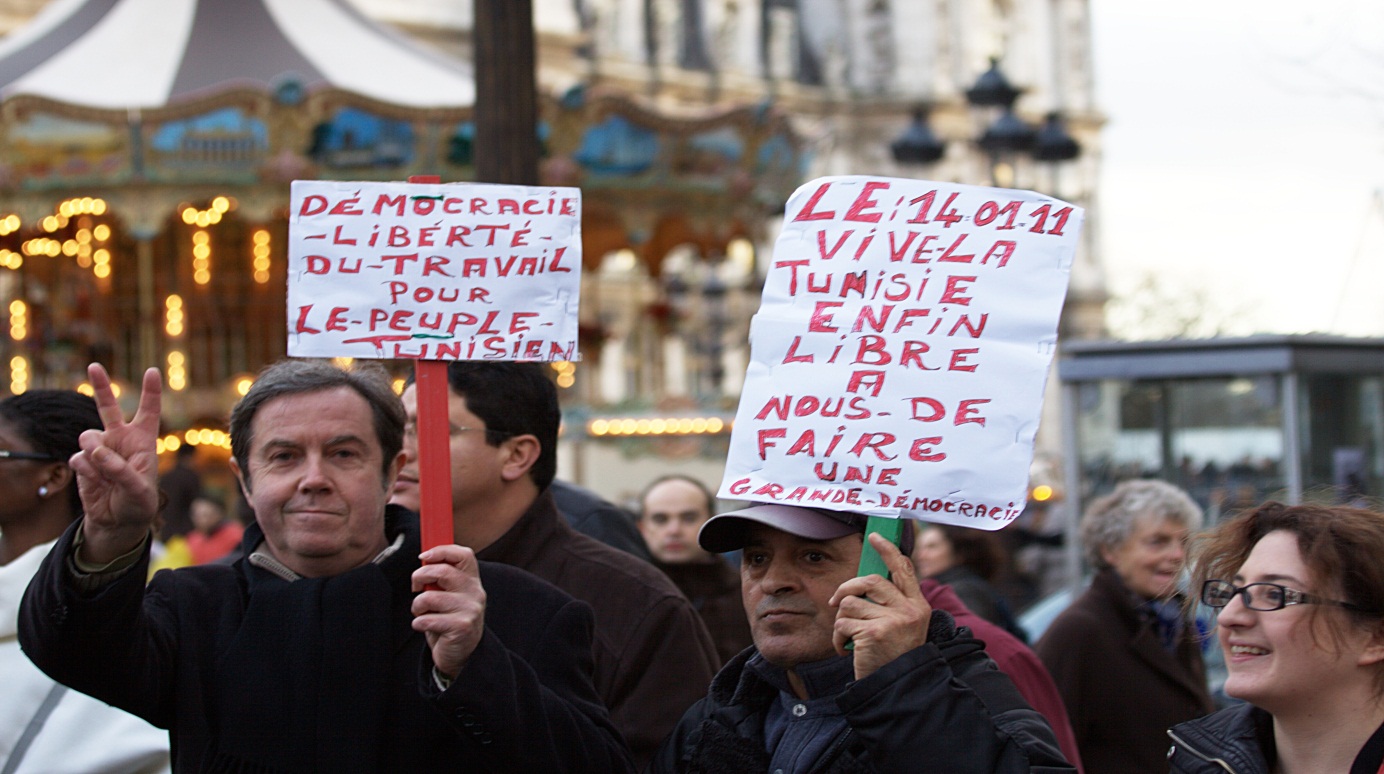 Tunisia’s transition process has not descended down the Egyptian route yet. But the reality of the current political and institutional deadlock has left it paralyzed, unpredictable and fragile at all levels. Even more worrying is the fact that the National Constituent Assembly (NCA ), originally designed as the vehicle to move Tunisia from an authoritarian past to a more democratic path, is emerging not only as a victim but, arguably, as a cause of the current political and institutional crises. Its work has been suspended and the institution remains in crisis. How and why did this happen?

One reason for the crises plaguing the country in general and the NCA in particular is the latter’s inability to adopt a new constitution almost two years after it was established and given just a one year mandate to complete the process. This failure and the controversial extension of the deadline to two years fuelled suspicion within the opposition who viewed it as the Ennahdha-led ruling coalition’s attempts to stay in power and prolong the transition period indefinitely.

The NCA‘s unilateral extension of its mandate was also controversial and may have contributed to the subsequent escalation of the crises. It is important to note that the law calling for the election of the NCA attributed one exclusive function to the body: draft a new Constitution. On its first sitting however, the Assembly adopted a new law that also gave it full powers to legislate and control the government. Many political actors and even academics resisted this move qualifying it as a ‘coup d’état’. This view, though legally questionable, does demonstrate the degree to which some of the NCA’s actions contributed to the tensions that generated the current crises.

In the Opposition’s view, the Ennahdha-led majority within the NCA is only interested in controlling the state machinery and placing its allies in key positions within the administration. The civil society and opposition parties fear that a capture of the state apparatus by the ruling party will have grave consequences on the upcoming elections and could pave the way for fraud.

Another issue is the uninspiring image the NCA built for itself prior to its suspension. The quality of debates, in both committee and plenary sessions, was weak. Members were not only incompetent and inexperienced but also lacked dignity and diligence. Absenteeism was rife among members of all the different political affiliations. The dogmatic rigidity of the majority and the often unconstructive approach of the Opposition only helped to reinforce the public’s negative image of the NCA and democracy itself.

The NCA was overwhelmed in arrogating to itself more powers and functions than it could handle. The result –one may argue—has unsurprisingly been disaster on most, if not, all fronts.

On this front excessive delays were not the only issue. The draft Constitution prepared by the body was severely criticized across the board including by members of the Opposition within the Assembly, civil society, and academics. In particular, the first draft Constitution was subject to severe criticisms. In the opinion of large segments of the public it was an attempt of the majority in the NCA (in particular the Islamist Party) to change the identity of Tunisian society, closely control public freedoms and concentrate power in the hands of the head of government. The subsequent three drafts, while improvements on the first, failed to completely assuage those concerns. As a result, the NCA became largely seen as an instrument being used by the majority party to impose a social model that was alien to Tunisia, and less a vehicle for preparing a new constitution, restoring democracy, freedoms and modernity.

On the political front

Instead of being a space for dialogue and interaction between the different political currents, the NCA has become a place of confrontation and division. Its actions, far from laying the foundations of transitional justice and national reconciliation, have caused division within society. One example is its consideration of a so called ‘immunization of the revolution’ bill of law. If passed, it would effectively bar everyone who occupied certain functions under the Ben Ali regime, including his dissolved party (the Democratic Constitutional Movement) from running in the next elections. Ennahdha and its ally, the Congress for the Republic argue that the law aims to protect the country against the return of members of the old regime and to prevent a counter -revolution. Opposition parties have harshly criticized the law as nothing more than part of the ruling party’s attempt to entrench itself in power. Human rights NGOs have expressed serious concerns regarding such arbitrary deprivation of an essential political right such as that to run for elections. Tunisian civil society have criticized it as a divisive project, coming at a time when what the country needs most is unity and consensus.

Moreover, instead of bridging the division that exists between Islamists and secularists, the NCA has consecrated and reinforced it by establishing cleavages Tunisian society has never known.

What does this translate into for Tunisia’s Mohamed Bouazizi(s)?

Without doubt, the most immediate fallout for ordinary Tunisians, who are deeply disappointed and disillusioned with the institution, remain on the socio-economic front. The revolution, the NCA and the constitutional process may signify the transition to a new democratic constitutional order. But to this group, the revolution was and remains more about the economics than the politics.

In this regard, it is clear that while the political wrangling continues, the economy—and with it Tunisians’ living conditions— will continue to worsen through, for example, continued flight of foreign investment, rising unemployment, plummeting value of the national currency and the acute crisis in the tourism sector which is one of the main sources of foreign exchange in the country.

Nonetheless, what constitutes a red line for Tunisians is their purchasing power. Its continuous deterioration might ultimately push citizens—who now see the NCA only as an ineffective, out of touch institution –to the edge, provoking a period of serious social unrest. This is especially true given the fact that it has still not adopted a constitution, despite all the taxpayers’ money that has supported its operations.

However, most damaging to the NCA is its failure to control the government and ensure that it performs on all levels. For instance, the NCA, according to former Prime Minister Hamadi Jebali, out of partisanship failed to censure the government and hold it responsible for poor policies that resulted in serious economic and social crisis, despite the unpopularity of the policies from the outset. It took a political assassination (Chokri Belaid, leader of the opposition on the left) for Ennahdha to consider forming a new government. On 25 July 2013, as the country commemorated the celebration of the proclamation of the Republic, a second political assassination took place, Brahmi Mohamed, leader of the pan- Arab opposition and NCA member. Even in the face of all these developments, the body has still not seen the need to withdraw its confidence from the government.

These assassinations illustrate the depth of Tunisia’s political crises, and the scale of the terrorist threat which the government has so far ignored and trivialized. Following the Brahmi assassination, the opposition withdrew from the NCA. This move can be seen in a number of ways. One is that it was a sign of protest against the climate of political violence engulfing the country. Second, it re-emphasized their call for a technocratic government whose sole function will be to fix the crisis and, abstain from running in the next elections. In response, the NCA‘s President suspended the activities of the body, a rare victory for the Opposition who interpret it as a recognition of the gravity of the crises and an invitation to dialogue. The majority has qualified the suspension as illegal and is pushing to reinstate it even without the withdrawn members. Any success on their part in this regard will clearly result in a monologue rather than a dialogue, which will only further discredit and damage it.

The crisis has also attracted the attention of non- political state actors who have proposed initiatives to find a solution. One example is the General Union of Tunisian Workers (UGTT), which has proposed the reinstatement of the NCA and the formation of a technocratic government to prepare the country for the next elections as a compromise solution. The Tunisian Union of Industry, Trade and for Handicrafts (UTICA), the Tunisian League for the Defence of human Rights (LTDH) and the National Bar Association of Tunisia have welcomed the UGTT’s initiative and seek to facilitate a national dialogue around it.

Despite this, recent declarations from the majority only provoke more questions about their commitment to negotiate and whether they are not just seeking to buy time. Clearly, politicians do not seem able or willing to find a solution to the crises. The future looks bleak and the reality casts serious doubts on any remaining hope for a smooth solution to Tunisia’s political and constitutional quagmire.

The troubled nature of this transition, which many hoped would be a positive example in the region, calls for a number of important reflections. How reasoned, for instance, was the Opposition’s decision to withdraw from the NCA in the first place? Will the ruling majority succeed in their push to reinstate the NCA? Will both parties be able to reach agreement on the formation of a new government? What really, are the prospects for a settlement? There are hardly any clear answers to these questions, and it would be unwise to attempt any under the current highly uncertain and quickly changing climate. Yet, one indisputable fact that is emerging from this is that for Tunisians, the NCA has reneged on its promises. What started off as a beacon of hope has increasingly become a symbol of disappointment.

[1] Researcher in International and Constitutional law | Lecture at the Faculty of Law, Social and Political Science, University of Tunis, Tunisia