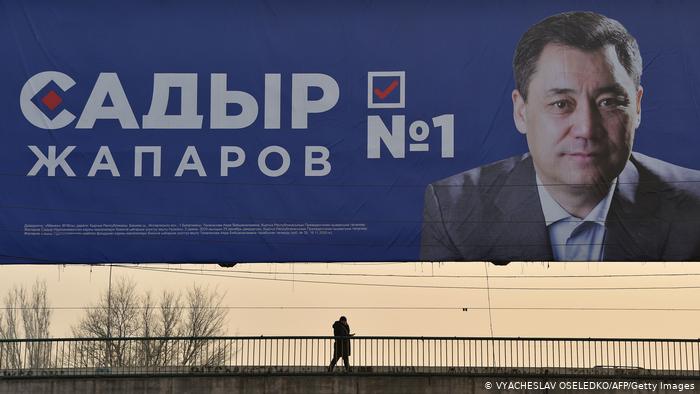 Kyrgyzstan’s ‘third revolution’ has set off a series of maneuvers leading to early presidential elections and a constitutional referendum approving a shift from a parliamentary to a presidential system of government, and an impending constitutional replacement. Questions over procedural legality, substantive constitutional changes, and the absence of a meaningful role for opposition and popular voices may undermine the legitimacy of any new Constitution – writes Elnura Omurkulova-Ozierska.

In an advisory referendum held on 10 January 2021 alongside presidential elections, Kyrgyzstan voted to change the system of government from parliamentary to presidential, reversing the shift to a parliamentary system after the 2010 popular revolution where most executive power lies with the prime minister. The outcome paves the way for far-reaching constitutional reforms under newly elected President Sadyr Japarov.

The chain of events that set off early presidential elections started over contested parliamentary elections in October 2020 marked by violations and irregularities. The elections returned an overwhelming victory to pro-government political parties, enraging opposition groups. The post-election crisis emerged in a context of severe social and economic crises resulting from the first wave of COVID-19, and the inability of parliament to adequately address crucial social, economic and health-related issues. Despite the COVID-19 urgency, parliament adjourned for the summer break, and members took an additional month for campaigning before parliamentary elections, frustrating the people. The contestation over election results prompted massive peaceful protests, which eventually escalated into clashes between protesters and law enforcement officials.

Amid the crisis, the Central Election Commission (CEC) declared the results of the parliamentary elections illegitimate and started the procedure for declaring a date for new elections.

Atambayev and Japarov had strong motives to return to the political power, and were the main competitors to seize presidential power after the protests forced President Sooronbay Zheenbekov’s resignation on 15 October. Nevertheless, following their release, the Atambayev-Isakov alliance did not last, as the former was returned to prison and the latter fled the country and applied for political refugee in France. At the same time, Japarov succeeded in mobilizing his supporters and cutting deals with key elites, including Zheenbekov.

From prison to power to reforms

With questionable support from the majority of members of parliament, Japarov transitioned from ‘political prisoner’ to acting Prime Minister and acting President in October 2020, and was elected President in January 2021. He then began a radical re-modeling of the political system by partially sharing power with opposition groups and admitting the necessity of rapid reforms.

Notably, in response to popular demands, Sadyr Japarov approved amendments to the Constitutional Law ‘On elections of the President of the Kyrgyz Republic and deputies of the Jogorku Kenesh of the Kyrgyz Republic’, which included the elimination of one of the main sources for irregularities during the last parliamentary elections, i.e. a template, designated Form 2, used by citizens intending to change their electoral address within the country (this right remained only for those living and voting abroad). The reforms also reduced the minimum electoral threshold for parties to join parliament from seven to three percent of the votes. They also reduced and mandated the return of the required financial deposit for presidential candidates and political parties nominating lists of candidates for parliament, if they received at least one percent of the votes (previously it was at least five percent).

Between revolution and constitutional continuity

Following the postponement of parliamentary elections, Japarov in early November announced a draft of a new Constitution, which became a key point of his presidential campaign. On 14 November, he resigned as acting Prime Minister and President in order to register as a candidate for the presidency. On 17 November, Parliament submitted for public discussion the new draft of the Constitution and on 20 November, the newly appointed acting President Talant Mamytov, close associate of Japarov, signed a decree forming a Constitutional Convention (where, according to opposition groups, the majority of the members supported Japarov) to consider and submit it back to parliament. However, under existing constitutional rules, acting President Mamytov had neither the authority to form a Constitutional Convention, nor to initiate constitutional reforms.

The advisory referendum on the system of government was a compromise to appease objection against a rushed process towards a new constitution.

The drafting of a new Constitution and plans to hold a constitutional referendum on 10 January 2021 raised a new wave of mistrust among citizens and opposition groups, prompting another wave of peaceful demonstrations in the capital. Moreover, in an urgent amicus curiae brief, the Venice Commission stated that ‘… the parliament should abstain from adopting amendments to the constitution, organic laws or other important reforms under political debate which are not necessary to return to the normal situation’, and that ‘constitutional amendment must be carried out in compliance with the relevant procedure as set out in the Constitution’. Later, certain groups even demanded the return to the Constitution of 1993, adopted by the so-called ‘legendary’ Parliament at the time of the republic’s formation, and treat it as a starting point for further developments. They argued that the 1993 Constitution was written ‘not for specific figures or political groups’, and therefore contains a system of checks and balances that does not allow for one branch of government to dominate the others and establish a dictatorship.

This forced Japarov, as presidential candidate, to support the decision to leave more time for the Constitutional Convention to work on the draft in line with the requirement for public discussions. He further proposed that parliament should call for a referendum on the system of government alongside the presidential elections, thus postponing the ratification referendum on the new Constitution. This proposal was accepted by parliament. Nevertheless, parliament failed to respond to demands from opposition groups and civil society organizations to comply with legal processes and to respect the rule of law, and criticism of proposed amendments.

Only 40% of voters voted in the referendum, which was enough to validate the outcome.

Acting President Mamytov subsequently signed a Law ‘On a referendum (popular vote) to determine the form of government of the Kyrgyz Republic’. Experts have criticized the Law for violating the procedure for consideration and adoption of draft laws, and for limiting constitutional rights and freedoms. Notably, the generic Constitutional Law on Referendum requires that ‘… the question of the referendum should be formulated in such a way that it excludes the possibility of multiple interpretation and only an unambiguous answer can be given’. The Law authorizing the referendum on the system of governemnt does not clarify what is meant by ‘parliamentary’ and ‘presidential’ forms of government and leaves wide room for misinterpretation.

Despite all the criticisms, the referendum was held on 10 January alongside early presidential elections. The elections and referendum were marked by a historically low turnout of less than 40% of eligible voters, potentially signaling a popular crisis of confidence in the electoral process. Nevertheless, the turnout was higher than the legally required 30% threshold, thereby validating the outcome of the referendum and enabling the upcoming referendum on a new constitution, which will operationalize the details of the presidential system.

Furthermore, the proposed appointment of a ‘People’s Kurultai’ as the highest advisory, consultative and coordinating body of popular rule has caused a wave of discontent among civil society organisations and citizens. Historically, representative bodies, such as the Council of Aksakals, People’s Assembly, and the People’s Kurultai have had significant impact on the country’s development. For independent Kyrgyzstan, the first People’s Kurultai was convened by its first President Askar Akayev in 1993 ‘… in order to strengthen the interethnic harmony of the people of Kyrgyzstan’, and has been used in the past two decades to make decisions on socially relevant issues.

The draft constitution strengthens presidential discretion in the establishment, composition and mandate of the People’s Kurultai.

References to ‘Kurultai’ appear in various laws and decrees, as well as in the 2010 Constitution, where convening the People’s Kurultai is a citizen’s right, and its decisions should be sent to the relevant authorities as recommendations. Under the draft Constitution, the right to convene a People’s Kurultai would belong only to the President, potentially expanding his powers beyond the constitutional ambit, and the mechanism for selecting members of the Kurultai and its influence and powers remain unclear.

In addition, the draft Constitution would tamper with fundamental values and democratic rights. Notably, the preamble of the draft Constitution would replace the principle of the ‘rule of law’ with ‘the rule of moral principles’. Moreover, according to art. 23 of the draft, ‘… printed publications, including publications on electronic media, shows and public events that contradict generally recognized moral values, traditions of the peoples of Kyrgyzstan, as well as international standards’ would be prohibited.

There is no clarity on whether parliament will consult the public on the draft constitution.

The Constitutional Convention has finalized its work and is expected to submit the draft Constitution to parliament. Whether there would be any further public discussions on the latest draft is unclear. Some legal experts have invoked parliamentary rules to note that chances of further public consultation  after the submission of the draft to parliament are slim. Nevertheless,  certain political figures have claimed that only Parliament has the mandate to submit the draft for public discussion, raising the possibility of further popular discussion and refinement of the draft.

Whatever the decision regarding public consultations, parliament and the people are expected to approve the draft constitution. The date for referendum is yet to be fixed, but it must be held ahead of parliamentary elections planned before 1 June 2021. Some members of CEC have raised the possibility of holding the referendum alongside the upcoming elections to local keneshes (councils) on 12 April 2021.

Despite a cycle of revolutions and constitutional change, neither presidential nor parliamentary systems of government have proved effective in realizing the historical hope for building a ‘Kyrgyzstani democracy’. The ongoing constitution-making process and the proposed expansion of the powers of the People’s Kurultai constitute attempts to fashion an appropriate governance framework. Nevertheless, the manner with which the changes have been pursued and the implementation leave a lot to be desired.

The procedural legality and legitimacy of the push for a new constitution and system of government remain questionable. Substantively, the draft Constitution faces a wave of criticism from civil society organizations, intellectuals and citizens. The lack of adequate information and reluctance to engage in meaningful dialogue over constitutional amendments from President Japarov’s administration is only worsening the situation. The circle of political events has created an ambiguous  sense that the weakness in the ‘legitimacy’ of Kyrgyzstan’s new constitution is a necessary compromise for the country’s progress. The result is that the country faces the prospect of another top-down, victor’s constitution with little meaningful place for popular input and compromise with the opposition.

Elnura Omurkulova-Ozierska is Director of the Central Asia Strategic Center for Analysis, Dialogue and Development (www.cascadd.org).