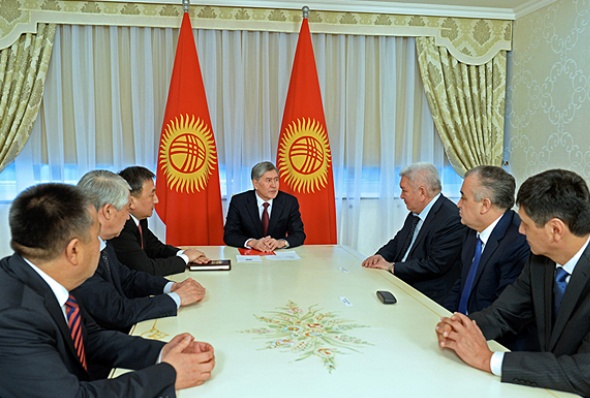 President Atambaev and his factions are pushing for constitutional amendments with questionable motivation, legitimacy and content. Despite the initial ease with which parliament approved the proposals, political crisis, voter apathy and the referendum threshold could dent the amendment drive – writes Margarita Meldon.

In a year that will go down in history for dramatic referendums and polarizing votes, perhaps Kyrgyzstan’s constitutional referendum, scheduled for 11 December 2016, is not of the highest profile. Yet, it constitutes a worrying test for the unstable democracy of the small Central Asian republic, as well as a zeitgeist-capturing example of nativist populism where the East and the West might eventually meet. As with other referendums of 2016, the political elites have evoked direct democracy to change the basic law in accordance with the trend for populist and state interests to take prevalence over human rights and a system of checks and balances between strong democratic institutions. Despite the claim that the proposed amendments will consolidate democratic institutions, a closer analysis of the draft amendments does not lend itself in support of that assertion.

The current Kyrgyzstani Constitution finds its origin in the 1929 Soviet Socialist Constitution of Kyrgyz Socialist Republic. After the fall of the Soviet Union twenty-five years ago, the Constitution as adopted by ‘the legendary Parliament’ created the basic law of independent Kyrgyzstan. This Constitution has undergone five amendment processes aimed at strengthening the powers of the executive. However, ultimately such evolution raised popular anger and the current iteration of the Constitution dates back to the 2010 revolution, which solidified the change from a presidential to a parliamentary form of government, making Kyrgyzstan the only country in Central Asia with a parliamentary form of government. The main cause and outcome of the 2010 events was the weakening of the executive power. At the time, in an attempt to safeguard the parliamentary model from future aspiring strongmen, the Constitution prohibited the Jokorku Kenesh (Parliament) from amending the institutional aspects of the constitution until September 2020.

The planned referendum was set into action with the adoption of the draft Law on Introduction of Amendments and Changes to the Constitution, which promises to address four principal issues: higher values and human rights; coordination between branches of government aimed at stabilizing the executive; enhancing constitutional and justice sector reforms; and synchronizing textual discrepancies between the official Russian and national Kyrgyz texts of the Constitution.  The proposed amendments have largely been discussed within the confines of parliament with questionable public engagement, beyond safeguarding various vested interests. Amendments must be approved in three parliamentary readings and finally in a referendum. The proposals have easily passed the second reading and are awaiting a third and final reading before their submission to a referendum, set for 11 December 2016. Although the ruling coalition has collapsed, with some parties opposing the proposed reforms and leaving the coalition, leading to the resignation of the government, parliament will probably be able to pass the amendments. The current Constitution requires that the Kyrgyz people must approve all constitutional amendments. After 1 September 2020, the Constitution allows parliament the option to amend the institutional aspects of the Constitution without resorting to a referendum.

The draft amendments were proposed on 29 June 2016 by four MPs from the ruling coalition in accordance with the current legislative framework. Public consultations were carried out just over the month of July – the traditional season of summer holidays. However, the driving force behind the amendment process is President Almazbek Atambaev, who will finish his first and last presidential term in 2017. Though the formal initiative comes from MPs, the proposed amendment would weaken the legislature. As conspiracy theorists would have it, the ultimate aim is to transfer significant powers towards the office of the prime minister and then to perform a ‘Russian Castling’, whereby the occupants of presidency and office of the prime minister switch places, allowing Atambaev to circumvent the presidential term limit.

Heated political battles surrounding the referendum culminated in the dismissal of the government on 26 October 2016. The crises started in a bizarre turn of events, on October 19, the Parliament set out to search for the original of the 2010 Constitution. However, the Ministry of Justice and other official depositories could not locate the official original. This almost satirical situation demonstrates how the basic law constitutes not only the metaphysical but also the physical basis of the political discourse in Kyrgyzstan.

Of importance to the public discourse was the prior exchange of public blows between the President and members of the former Interim Government that drove the present iteration of the Kyrgyzstani Constitution, and who have been vociferously opposed to the referendum. The tension is partly because of proposed changes to criminal statutes of limitation laws potentially allowing the prosecution of former members of the Interim Government and other political opponents. The President in turn repeatedly stresses the conflict potential of the ‘mine-ridden’ current Constitution and the desirability of addressing constitutional problems before a crisis arises, denies potential interest in taking the amplified Prime Minster’s office, and accuses the opposition of creating a situation set to explode in conflict.

Weakening constitutional checks on the executive

Opposition groups, civil society and the legal community have expressed serious reservations about the legitimacy of holding the referendum and the constitutional validity of the proposed amendments. Among the principal questions raised are the broadening of the powers of the prime minister, changes to the judicial branch, with the critical weakening of the Constitutional Chamber, and the infringement of human rights through supremacy of ‘supreme system of values’. The key legitimacy question relates to the moratorium on the parliamentary amendment of the institutional sections of the Constitution (interpretation of article 114). One of the main criticisms relates to the breach of procedures for initiating changes to the constitution. For instance, the former Prosecutor General Aida Salyanova, publically declared that ‘MPs do not have the right to initiate amendments’ as  article 4 of the Decree of the Interim Government ‘On President of Kyrgyzstan in transition period’, which was adopted at the 2010 referendum, forbids amending the institutional aspects of the Constitution until 1 September 2020.

The Joint Opinion of the Venice Commission on the Draft Law draws attention to the lack of clarity in the procedure for amending the Constitution, and the need for transparency and inclusiveness in carrying out the referendum. The Commission was more cautious in evaluating the proposed Constitutional ‘Highest Values’ which replace the human rights and fundamental freedoms in the hierarchy of values with, among others, love for the motherland. Overall, the Commission concludes that the proposed amendments may undermine certain human rights and fundamental freedoms, the rule of law, the separation of powers and the independence of the judiciary.

Human rights remain a great concern of the critics, in particular the proposed tampering with the value system of Kyrgyzstan. In the eternal Soviet and post-Soviet struggle between the prevalence of the rights of individuals over the interests of the state, the proposed amendments will shift the balance toward the state. The amendments would also undermine the status and direct effect of international human rights treaties, decisions of international human rights tribunals, and the principle of non-discrimination through the definition of marriage as a union between a man and a woman.

Perhaps potentially most damaging to democratic governance are the revisions of articles regulating the judicial system, which tamper with the powers, autonomy, independence of the Supreme Court and the Constitutional Chamber. In particular, the proposed amendments could effectively turn the Constitutional Chamber to a merely advisory organ, require higher consensus for its judgments by establishing supermajority decision rules, give the President wide discretion in the appointment process, and reduce the parliamentary majority required to remove judges, including constitutional judges, from office. Furthermore, the amendments remove the right of citizens to request constitutional review of laws and decisions, reverting to the pre-2010 model where individuals could only raise constitutional issues in the context of particular cases. Indeed, the Venice Commission concludes that ‘the new provisions on appointment and dismissal of judges and on constitutional adjudication itself provide the legislative and executive branches with overwhelming leverage over the Constitutional Chamber, and thus severely undermine the principle of the separation of powers’. While the link with the Opinion of the Commission is not clear, the latest version of the proposed amendments appears to have dropped reference to the Constitutional Chamber.

In addition to the legal and political criticism that the main revisions can lead to the disintegration or at least a disruption of the current system of checks and balances, the positive impact of the proposed amendments to the people of Kyrgyzstan and to the political system is unclear.

The constitutional referendum: The last hurdle?

In response to concerns of legitimacy and constitutionality, on 11 October 2016, the Constitutional Chamber of the Supreme Court ruled ten to one that the draft amendments are in line with the basic law and that they adhere to the principles of rule of law, including fundamental human and civil rights. This decision eliminates the last institutional obstacle to the referendum. The proposed amendments will be submitted to popular referendum upon approval in a third parliamentary reading.

According to the law on referenda, the outcome of the constitutional referendum will be valid only if at least 50% of the eligible voters cast their votes, with the majority supporting the reforms. Partly because of the lack of organized public engagement, the Vox popoli does not seem too concerned. People seem to view the referendum from the perspective of it being another round of political maneuvering of the political elites. Popular opinion in the country holds that winter is not a good time for social upheavals in Kyrgyzstan as the population is too busy fighting the heating bills to analyze closely the controversial aspects of the constitutional amendments. The spring, which is the usual season for the pushback from the people of Kyrgyzstan, could bring some challenges to President Atambayev’s initiative.

Then again, in the words of Ancient Roman lawyer Cicero, ‘Nothing is more unreliable than the populace, nothing more obscure than human intentions, nothing more deceptive than the whole electoral system’. Despite the ease with which parliament has approved the proposed amendments, the outcome of the reform process is far from certain. Political crisis, voter apathy and the referendum threshold could still prove to be effective hurdles to the amendment drive.

Margarita Meldon is the Regional Program Manager for Eastern Europe and Central Asia at the International Development Law Organization. She has been working on justice reform in Kyrgyzstan since 2006.