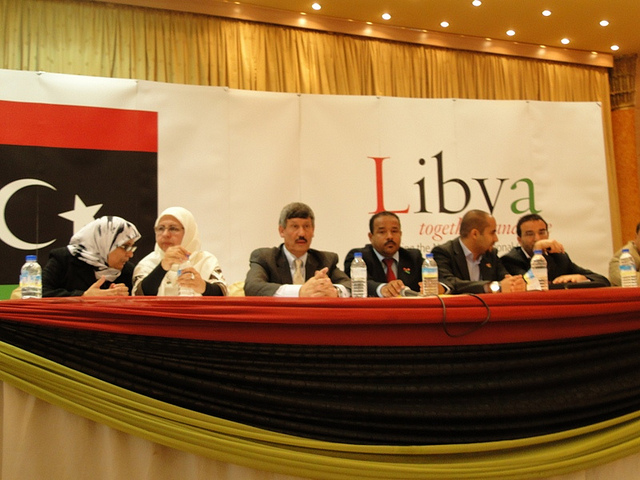 The overthrow of Gaddafi in 2011 has sparked a debate about the position of Sharia in the new Libya. While there seems to be a consensus that it should play a role, opinions differ as to the details of this role. This division lies at the heart of the current political and military crises. Being entrusted with writing Libya’s new constitution, the Constitutional Drafting Assembly (CDA) has to deal with this issue, a task that surely will not be an easy one.

Islamists played a major part in the 17th February Revolution that ended Gaddafi’s rule. Not surprisingly, they demanded that laws inherited from the old regime be replaced with Sharia. Many of them took advantage of the new democratic space and process created by the revolution by forming political parties or joining the government to advance and fulfil their demands in this regard. For example, Muslim Brothers established Hizb Al-Adala wal-Bina (the Justice and Construction Party) that won seventeen seats in the General National Congress (GNC) and al-Taj’mou al-Islami formed Hizb al-Risalah (the Message Party) and won one seat in the GNC. Others such as Ansar al-Sharia, however, denounced the whole democratic process as un-Islamic as it prioritized citizens over Allah. Interestingly, non-Islamist political parties never questioned whether Sharia should be recognised in Libya’s legal system. Some, like the liberal National Forces Alliance, called for its constitutionalisation.

The scope of interpretation of Sharia within Libya’s legal system was another issue, even in Gaddafi’s time. The legal system made the distinction between issues of personal law such as marriage, inheritance, divorce, etc., and other non-personal law issues such as those related to financial transactions and contracts, and administrative and criminal-law. The former was regulated by Sharia as interpreted by the Malki madhaab (school of thought), while the latter were governed by secular law derived—through Egypt— from European codes.

Even then, Gaddafi’s regime thoroughly reviewed the secular laws to ensure their compatibility with Sharia. It also enacted new laws on hadd offences or crimes with Sharia prescribed punishments. These include theft and robbery (Law /1972), adultery (Law 1973/70), unfounded accusations of fornication (Law 1974/52), and the consumption of alcoholic beverages (Law 1974). These  changes meant that the  distinction was no longer between affairs governed by Sharia and those regulated by Western inspired laws; but rather between matters ruled directly by Sharia on the one hand, and on the other, matters governed by laws either derived from Sharia or conforming to Sharia. In both cases, the interpretation chosen for Sharia was quite traditional.

Gaddafi’s revolutionary era further strengthened this trend. On 2nd March 1977 a ‘Declaration on the Establishment of the Authority of the People’ was issued. It outlined the general constitutional framework in Libya: changing the country to Jamahiriya, i.e., the state of the masses, basing its ideological stance on a form of Islamic socialism, and, more importantly, stating that the Quran was the constitution of Libyan society.  Seemingly, this declaration placed Sharia in a higher position; yet, this was part of the application of Qaddafi’s ideology, and should be read as such. In stating that the Quran, rather than Sharia, was the constitution of society, the Declaration was echoing Gaddafi’s well known denial of the authority of the Sunnah, i.e., the Prophet Mohammed’s sayings and acts, which is considered to be the second source of Sharia, after the Quran. Gaddafi also called for opening “the gates of ijtihad (free reason of Islamic law)” and gave himself the liberty to practice it. This enabled him to reformulate Islamic precepts to fit his own ideology.  Thus, one could safely conclude that implementing Sharia was not an issue during Gaddafi’s time, which interpretation of Sharia to be implemented was.

This continued to be the case in the aftermath of the 17th February Revolution, which saw the Islamists still dominating the post-Gaddafi political dispensation. The prominence of Sharia as the principal source of legislation was recognised in the Constitutional Declaration issued in August 2011 by the Interim National Transitional Council (NTC). On 23 October 2011, in a speech he gave on the Liberation Day, Mustafa Abdul Jalil, the NTC Chief, announced that ‘any law violating Islamic Sharia is suspended with immediate effect, including that which restricts polygamy.’ While this statement, technically speaking, lacked the force of law, as Abdul Jalil could not in his capacity as the Chief of the NTC annul or even alter any law, it showed the importance of Sharia to the Libyan decision and policy makers.

A number of law reforms carried out since then confirm this. In 2012, the NTC passed Law No. 29/2012 on the Regulation of Political Parties, banning any party from circulating or publishing any thoughts violating Islamic Sharia. In the same year, it enacted Law No. 15/2012, establishing the Dar el-Efta—an independent body tasked with giving religious opinions and advice— and requiring society to respect any fatwa (scholarly opinions) it gave. Law No. 2012/46 amended Banking Law No. 1/2005, adding rules and regulations governing Islamic banks.

To ensure the supremacy of Sharia in the legal system, the GNC - widely perceived as  dominated by Islamists and their allies - voted on 4 December 2013 in favour of a statement declaring that Sharia is ‘above the Constitution’ and the ‘only source for legislation in Libya,’ with any laws contradicting it deemed null and void.

However, the recent political and military developments have weakened the Islamists’ power, and thus, opened the door to challenging the now prevailing interpretation of Sharia. The GNC, dominated by Islamists and their allies, has been forced to hand over power to a newly elected Council of Deputies in which, according to initial results, they have barely managed to win 26 to 36 out of its 200 seats. Also, despite the fact that Operation Dignity - waged by General Hafatr against Islamist militants - has not been a military success, it has touched a chord with many Libyans who are frustrated with the security situation. Many blame Islamist militants for the chaos, especially after Mohamed al-Zahawi, a top leader of Ansar al-Sharia, appeared on TV and denounced Operation Dignity as a war against Islam and threatened to transform Libya into a battlefield like Syria. Many Islamists’s groups condemned and distanced themselves from al-Zahawi, but this has not repaired the negative reputation of Islamists as a whole.

In general, the power that Islamists enjoyed since the collapse of Gaddafi’s regime seems to be weakening. These developments have opened the door for discussions on the status of Sharia within the new constitutional dispensation.  The CDA has already announced that without doubt, Sharia will be recognised in the Constitution and, together with Islam, shall form the main points of reference for its work. Yet many questions remain unanswered. What, for instance, is the impact of the constitutionalisation of Sharia on the current legal system? Which interpretation of Sharia will be adopted – liberal or conservative? What will be the role of religious scholars, judges, and state officials in the process? It remains to be seen how much courage and openness the CDA will have in addressing these questions as it ploughs on with its constitutional drafting mandate.