The Constitutional Convention’s rules of procedure: a path of transformative institutionalism in Chile 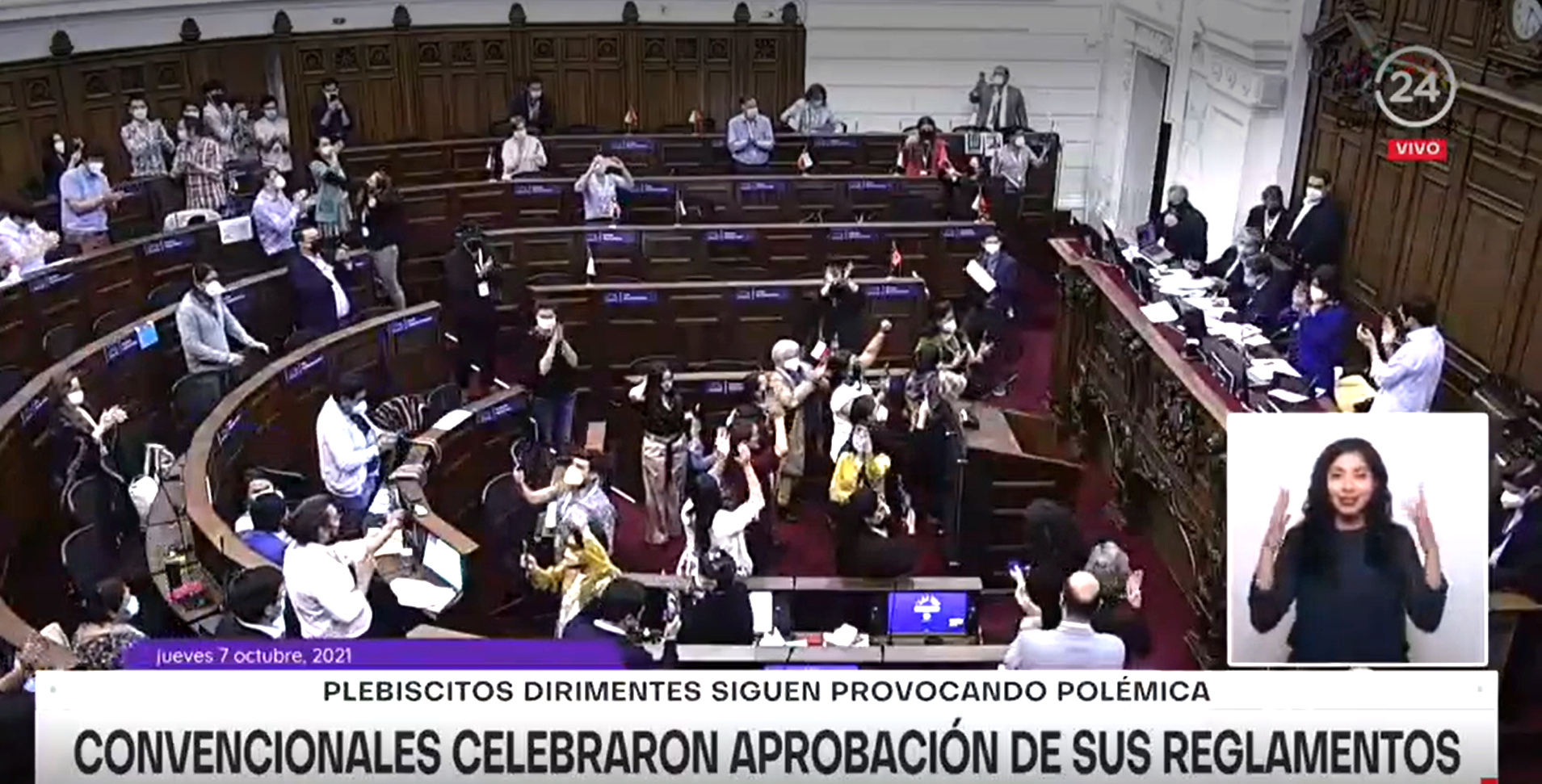 Chile’s Constitutional Convention has approved five different rules of procedure within three months: a considerable achievement. Passing the rules proves the ability of the diverse and representative group of delegates to negotiate and build consensus in a spirit of transformative institutionalism. Honoring the broad social movement that precipitated its creation, the Convention has promised to institute wide-spread public participation. Nevertheless, one controversial addition to the rules, that of the deadlock-breaking intermediate referendum, could encourage polarization rather than increase legitimacy – writes Dr. Pamela Figueroa

Chile’s recently elected Constitutional Convention just approved five different rules of procedure within the term set by the Convention’s vice president: three months. These rules of procedure include an overarching general rule and also rules on ethics; indigenous participation and consultation; regulation of mechanisms, organization and methodologies of public participation and education; and allowances, External Allocations Committee, and administration and finance. This achievement helps to mitigate concerns about political stability and democratic practices of the Convention. It further illustrates how the Convention’s processes of negotiation and decision making embody transformative institutionalism, where political and social forces converge within an institutional framework to produce social change. Because the Convention’s decisions are made in an assembly elected by inclusive mechanisms of representation and decision making, delegates bring to the discussion demands from different political groups. As a result of this, the five rules of procedure incorporate diffuse and inclusive points of view.

The rules of procedure starting from zero: the challenge of the two-thirds requirement

The Constitutional Convention started its deliberations with no specific rules of procedure, as the initial process was defined and regulated through an amendment to the current constitutional text. This reform was based on the 2019 Agreement for Social Peace and a New Constitution, a pact made by almost all Chilean political parties with representation in Congress, to pursue an institutional solution to unrest in the country.

A special commission of 14 experts in political and constitutional matters, nominated by the political parties, drafted the text of the amendment that was approved by Congress in December 2019. From this process, Law 21.200 was passed, which amended the Constitution to enable a referendum on a new constitution, and the formation of a constitution-making body. The amendment stated that the rules of procedure and the provisions of the draft constitution must be approved by two-thirds of delegates, but declined to outline the specific rules of procedure for the future Convention in recognition of the autonomy and constituent power of that institution.

This choice was important: the Chilean constituent process is the result of two different movements. On one side, mass mobilizations against the elite and status quo, citizen dissatisfaction with democratic performance, and a crisis of trust and legitimacy. On the other, a broad political agreement of the major political parties that would allow the channeling of social discontent through a process of constitutional change framed within the current democratic institutional structure. The enabling amendment therefore drew a fine line between the established political power regulating the constituent process, and the necessity of letting the new process decide its own bodies and methodologies to carry out its mandate.

Given that the political agreement took place in a context of political crisis and social mobilization, mistrust was one of the main challenges to be addressed. Chile channeled its discomfort and mistrust through a constituent process characterized by the inclusion of new actors and citizen participation in an innovative institutional framework provided through the constitutional reform. However, there were two aspects that generated concern and questioning: the two-thirds rule to approve the rules of procedure and constitutional provisions – which was associated with the institutional obstacles that accompanied the political democratization of Chile since 1989 – and the fear that the more traditional political groups would capture the process.

The rules of procedure of the Convention: A test for building trust

The drafting and approval of the Convention’s rules of procedure was the first proof that the new constituent body could issue a regulation agreed upon by a majority (and in some cases two-thirds) of the delegates, and within a reasonable period.

Given the changes to the electoral rules allowing independents to form a list, the requirement of gender parity, and reserved seats for indigenous representatives, no political sector obtained a majority in the Convention, nor did they achieve the numbers needed for a possible veto. This means that to achieve a two-thirds majority, delegates must negotiate and agree. To achieve this, it was established that the initial form of organization would be through provisional committees, one being the rules of procedure committee, composed of 31 members who were appointed by other delegates. Thus, it was possible to integrate the views of all political sectors, regardless of their political affiliation, and principles such as gender equity, the inclusion of indigenous peoples and social minorities, youth, the elderly, and what have been called "historically excluded groups" have been explicitly mentioned in the text of the rules of procedure.

The rules of procedure envision the inclusion of indigenous peoples and social minorities, youth, the elderly, and "historically excluded groups.”

On 12 August 2021, the first rules of procedure, on the External Allocations Committee, were approved. These rules of procedure regulate the allowances and spending of the Convention, incorporating the principles of transparency, probity, equity, and territorial participation. An External Allocation Committee was created, made up of five public officials from the following services: Office of the Comptroller General of the Republic; Council for Transparency; General Treasury of the Republic; Chamber of Deputies; and Senate. This was politically relevant, because it delineated the relationship of the Convention with other powers of the State, recognizing the role of each, and in a clear spirit of cooperation.

On 29 September, the General Rules of Procedure were approved, and at this time it was decided that there would be more than one set of regulations to deal with matters such as participation, indigenous consultation, and ethics. Important aspects in the General Rules of Procedure include the definition of the assembly as representative, with gender parity, plurinational, and autonomous. Its objective is to write a draft Constitution, and it lists 27 principles on which it will base its work. One of the controversial issues, previously analyzed on ConstitutionNet, was the endorsement of the two-thirds rule to approve the rules of procedure and each of the constitutional provisions.

The potential procedural and philosophical challenges of extensive public participation

An even more controversial topic is the inclusion of intermediate referendums, which is potentially incompatible with Article 133 of the Constitution (stating that the Convention may not alter the quorums or procedures for its operation and for the adoption of resolutions). An intermediate referendum is a mechanism of direct democracy: it would allow the public to decide whether one or more constitutional provisions are incorporated into the draft Constitution if the provisions obtain a three-fifths rather than a two-thirds majority approval in the second voting (Article 38). To call such a plebiscite, an absolute majority vote of the Convention is required, and the result of an intermediate referendum is binding on the Constitutional Convention. In practice, there would be only one referendum, potentially with several questions to be approved or rejected by voters (with compulsory voting from 18 years old and optional voting from 16 years old). It is not possible to convene plebiscites on provisions that would abolish fundamental rights or breach norms of international human rights treaties.

The intermediate referendum is a response to the distrust of the two-thirds rule from the left and left-leaning parties and social movements represented in the Convention, and the high demand of civil society for public participation during the constitutional deliberation. Representatives from the left proposed the intermediate plebiscites as a mechanism that will guarantee citizen participation if some constitutional content is blocked. As mentioned above, there is no political group or coalition within the Convention that has the absolute majority of the votes, nor does one have the power of veto. In this case, the two-thirds rule becomes an incentive and opportunity to build large majorities in the constitutional debate, necessary for legitimacy.

Intermediate referendums are a perverse incentive against the necessary discussion of difficult and controversial issues that must be resolved by the representatives.

Intermediate referendums are not a good deadlock breaking mechanism for several reasons. They are mechanisms that polarize, while the process requires consensus building. Further, they are a perverse incentive against the necessary discussion of difficult and controversial issues that must be resolved by the representatives in the Convention, who were elected in a participatory and inclusive process to be representatives of the people and to draft the constitutional text.

Finally, it is important to highlight that two rules of procedure on participation were approved, the second of which addresses popular and indigenous participation. Both of these rules of procedure guarantee that citizens can influence the debates through various mechanisms of citizen participation, initiated by the Convention or self-convened by the citizens. As in other matters, an attempt has been made to include proposals from multiple sectors represented. International experience shows that participation mechanisms must be appropriate to political contexts, and in the case of Chile, deliberative participation mechanisms are required, which strengthen legitimacy, and not those that can encourage polarization, like intermediate referendums.

The balance of the first stage of work of Chile’s Constitutional Convention is positive. Approving five operating rules of procedure in the self-imposed period is an achievement which must be recognized, and a political accomplishment that shows the ability of a diverse and representative group to build consensus in the time of the Covid-19 crisis. Agreed upon rules of the game give a floor of legitimacy to the next stage: deliberating on the content of the new constitution. Beyond the controversial aspects, fomented by the crisis context and the composition of the Convention, the changes in Chile offer a groundbreaking example of transformative institutionalism.

Dr. Pamela Figueroa is Doctor in Political and Social Studies, academic at the Institute for Advanced Studies of the University of Santiago, and academic coordinator of the New Constitution Observatory.