Caught between law and politics: Judicial review of constitutional amendments in Libya 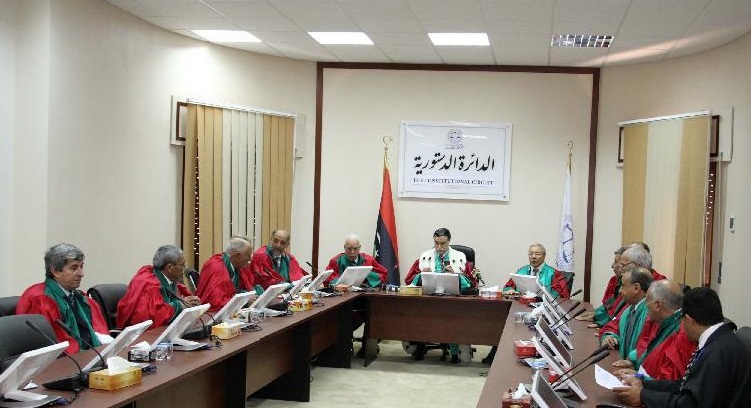 On 6 November 2014, Libya’s top judges issued a ruling suggesting that the country’s House of Representatives (HoR)—which had replaced transitional legislature, the General National Council (GNC) in June 2014 as the main legislative arm of government—may have been unconstitutionally constituted. The ruling once again underscores the rocky and unpredictable nature of Libya’s political transition, which has seen the Supreme Court often playing a key dispute resolution role. In June, the Court ruled that the GNC’s decision to elect business man Ahmed Al Maiteeq  to replace  Abdullah al Thinni  as Prime Minister earlier in May was unconstitutional, ending a power struggle between the two that had threatened to derail the transitional process.

Unlike the June decision which ended a political stalemate, albeit temporarily, the recent decision which stunned both internal and external observers seems to have only sowed further discord. It is viewed in some circles as a blow to the country’s political future. But how did this happen?

The story starts with the formation in February 2014 of what came to be known as the February Committee (FC), a fifteen member body composed of lawyers, academics and private activists drawn from within and outside the GNC. The FC was created amidst conflict between the Islamist members of the GNC (who opposed it) and its liberal faction (who favored it). It was intended to be an ad hoc body charged with, amongst other things, overseeing the phasing out of the transitional legislature, which was facing calls for disbandment because of its poor performance, and designing an alternative legislative structure.

The FC’s proposed solution was a new 200 member HoR based in Benghazi. Setting up this new structure, however, required an amendment of the constitutional declaration, which according to its article 38 must be approved by a two-thirds majority in GNC (at least 124 of the 186 members). The amendment was initially approved, on March 11, with only 121 votes; although three other members signified their support for the amendment much after the vote had been passed, the status of the amendment was unclear. A few weeks later on March 30, Law No 10/2014, which governs the conditions for elections to the HoR, was also passed, despite opposition from many Islamists who dominated the GNC and resisted its disbandment, arguably, out of fear of losing their majority in a new election.

In the ensuing elections in June, the Islamists won less than 30 out of the HoR’s 200 seats. Despite the constitutional requirement for the HoR to sit in Benghazi, it has opted to sit in Tubruk in Eastern Libya, presumably to avoid any pressures from the Islamists militias who control Benghazi. Unable to mount a credible legal challenge against the new HoR dominated by Federalists, Independents and Liberals, following the election, the Islamists seized on the seat issue with the pro-islamist GNC speaker  Nuri abu Sahmain refusing to hand over to the new HoR Speaker unless it convened in Benghazi. These only aggravated the rather acrimonious and already tense relationship between the two camps

In addition, the Islamists also took issue with the HoR’s decision to appoint Abdel-Razzaq al-Nazouri (an officer closely connected to the notorious anti-Islamist General Khalifa Heftar) as Libya’s Army Chief General as well as its call for international action against the Islamist driven Operation Dawn.

While the HoR’s Islamist members resorted to boycotting House sessions held outside Benghazi, other groups allied to them have challenged the legitimacy of the HoR, and took to the Court to challenge its constitutionality. It is against this background that the Supreme Court’s decision came down.

However, few had anticipated that the Court would go as far as inquiring into the constitutionality of the March Amendment to the Constitutional Declaration that paved the way for the establishment of the HoR. In fact, unaware that the Court would not limit itself to responding to the challenge on the constitutionality of holding sessions in Tubruk as opposed to Benghazi, the HoR’s spokesperson had announced ahead of the ruling that they would comply with the Court’s ruling.

The Court also ruled that the fact that three members later gave their assent to the constitutional amendment after the formal vote was both irrelevant and illegal. First Deputy Speaker, Ezzidine Al-Awami—an independent  who supported the amendment and was deputizing  in the absence of  the Speaker, at the time, included these votes in the final tally to determine that the required majority to pass the amendment was achieved. The Court relied on Article 73 of the GNC’s internal regulations, which invalidates any votes cast post factum, to reach this conclusion.

While the it refrained from going as far as directly decreeing the dissolution of the HoR, the effect of the Court's ruling, nonetheless, was to de-legitimize the body by invalidating the constitutional amendment that made its establishment possible. This has reopened the debate on which institution is the legitimate legislative arm of the government. For the Islamists who had dominated the former GNC and the Operation Dawn parties, the ruling meant the GNC remains the only legitimate legislative authority and the International Community should therefore recognize it. GNC members who resisted the HoR have resumed sessions Tripoli. In a statement, however, the HoR condemned and ultimately rejected the ruling arguing that the Court’s decision—made in Tripoli where it sits—was probably under duress from the Islamist militias controlling the city. It has also continued to hold sessions in Tubruk.

The ruling has also prompted different interpretations beyond the political class. Al-Kawni Abouda, a prominent law professor and Chairperson of the FC, and Azza al-Maghour, a prominent lawyer and Rapporteur of the FC, defend the legitimacy of the HoR on the basis of Law No 10/2014, which governed the elections into the body. Their contention is based on sequencing. They argue that the FC was charged with two tasks: drafting a proposal for constitutional amendment, and the elections law. The first was completed on March 11 and the latter on March 30, and as such, there was no link between the law and the constitutional amendment to make the latter unconstitutional.

Fantastic and fallacious as this argument may sound—given that Law No 10/2014 could not have been passed absent the prior constitutional amendment which was meant to pave the way for a new legislative body—it nevertheless underscores the need for dialogue between both camps especially as neither none seems ready to relinquish its legitimacy claims for the other. It is yet to be seen whether and when this will happen.

This ruling has sown more confusion into Libya’s already troubled transition, as recent events in the aftermath of the ruling continue to show.  On the one hand, the HoR is contesting the Court’s decision, and on the other hand elements of the former GNC still see that body as the country’s legitimate legislative institution. The GNC has  recently sent a letter to the Constitution Drafting Assembly (CDA) requesting status updates on the Assembly’s work so that the GNC can fulfil its 'constitutional tasks’. This development puts the CDA, which has so far tried to remain neutral in the conflict between the political institutions, in a difficult political position.  It faces the dilemma of how to respond to the GNC’s request, without appearing to undermine the HoR, which is recognized not only by some internal actors, but also by the international community, as the country’s democratically elected legislative body.  This is a critical question. The CDA must not be perceived as siding with either organ lest it ultimately puts into question the legitimacy of the future constitution itself.