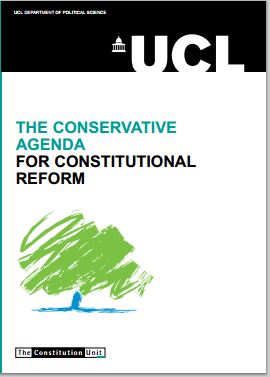 This report by Prof Robert Hazell from the Constitution Unit of the UCL, was published in 2010 by the UCL in London. The Conservative party have a big agenda for constitutional reform in the next Parliament, including big commitments of their own, and unfinished business from Labour’s constitutional reforms. The big Conservative commitments are to reduce the size of Parliament (Commons and Lords); introduce a British bill of rights; legislate to require referendums for future EU Treaties, and reaffirm the supremacy of Parliament in a Sovereignty Bill; introduce English votes on English laws; and hold referendums on elected mayors in all major cities. Unfinished business from Labour includes strengthening the autonomy of the House of Commons; further reform of the House of Lords; and devolution, where all three assemblies are demanding further powers.