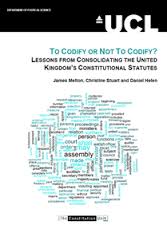 To Codify or Not To Codify? Lessons from Consolidating the United Kingdom’s Constitutional Statutes

• Only a few countries in the world lack a codified constitution. The UK is one of those countries. This has prompted some to advocate for the codification of the UK’s constitution. Perhaps the most notable proponents of such a position, at least recently, are the members of the Political and Constitutional Reform Committee (PCRC), but they are certainly not the only actors to champion this position.

1. Much of the UK’s constitutional order is already written down in statute form.

3. Further codification is not essential. Much of what is uncodified has recently been incorporated into the Cabinet Manual and other texts. In addition, the parts of the UK’s constitution that remain uncodified are also the parts of the constitutional order where conventions are the most well-established. As a result, codifying these elements would likely have minimal impact on day-to-day politics.