Virgin Islands’ 2022 Constitutional Review Commission: Off to an interesting start 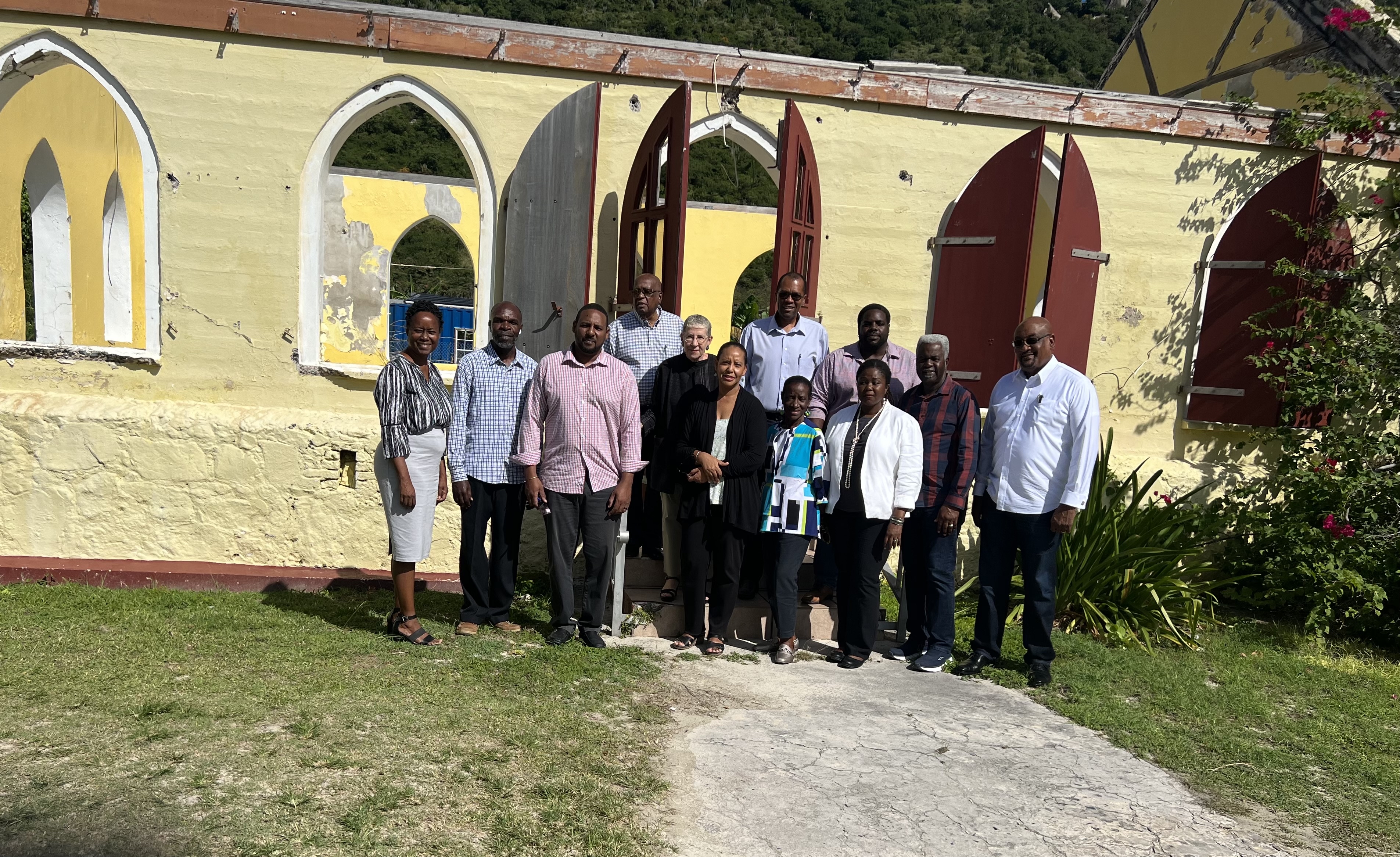 BVI Commission members at a community meeting on the island of Jost Van Dyke stand in front of a church damaged in 2017 by two devastating hurricanes (photo credit: BVI CRC 2022)

The Virgin Islands is currently undergoing a constitutional review process, which is led by a Commission mandated to identify potential reforms needed, including in relation to executive accountability, an institutional framework for good governance, further devolution of power and self-determination. As the public education and consultation exercise gets underway, emerging themes all ultimately question whether the Westminster-style model is the most efficacious for any culturally diverse and far-flung British Overseas Territory – writes Lisa Penn-Lettsome

In January 2021, a separate process, a Commission of Inquiry (CoI), was launched by the Governor of the Virgin Islands (the representative of the King) with wide terms of reference. The inquiry was headed by a sole Commissioner, Sir Gary Hickinbottom. After two extensions, its report was submitted in April 2022. The Commissioner of Inquiry concluded “that a Constitutional Review is […] essential with the aim of ensuring that mechanisms are put in place so that abuses which I have identified [corruption and abuse of office] cannot continue or be repeated; and, more constructively, to ensure that the needs and aspirations of the people of the BVI (including their aspiration for self-government) are met.” (p. 11). The report also recommended a revision of the membership of the CRC “drawn from a wide constituency” (this was done in July 2022), and an early and speedy review of the constitution within 12-18 months. The hype surrounding the Commission of Inquiry has unfortunately left many with the misunderstanding that the constitutional review exercise flowed from the inquiry.

As noted above, when the present Virgin Islands Constitutional Order, 2007 was negotiated, it had been agreed then that the constitution would be reviewed in 10 years. However, the 10-year anniversary of the 2007 Constitution was followed by catastrophic disaster after the passage of two back-to-back Category 5 hurricanes. Then came the Covid-19 pandemic. The delay in the 2020 constitutional review commission getting on with its work left an opportunity open for the CoI to influence the mandate of the constitutional review exercise. However, it is not accurate to state that the review exercise flowed from the inquiry, as it was already underway before the launch of the CoI.

The Cabinet approved a newly constituted CRC at its meeting on 29 June 2022. The revised 2022 16-member Commission includes representation from the three populated sister-islands, former and present senior public servants, the business community, the clergy, historians and lawyers. The CRC held its inaugural meeting on 18 July 2022. The focus of the meeting was to supplement the overarching and general terms approved by Cabinet in 2022 with the additional sub-terms recommended in the CoI report.

Following its inaugural meeting, the CRC presented the draft terms of reference which were agreed by the Governor and the Premier, and tabled in the House of Assembly. The terms of reference include: evaluating the current Constitution and determining whether or how it can facilitate a shared vision of the BVI’s people, and to make recommendations relating to, but not limited to, executive and legislative accountability, the institutional framework for good governance, the powers of the Governor, further devolution of power and self-determination.

The 2022 CRC comes at a historic moment given that it is being conducted in the throes of the scores of recommendations from the Commission of Inquiry, and one cannot help but sense that this state of affairs lingers as an undercurrent in the minds of the public who share their comments during the public consultations. Nevertheless, the CRC must press on and remain focused on its core objectives.

Public education and consultation kicked off on 1 November 2022 and are expected to continue into January 2023. Whilst the traditional town-hall style meetings are conducted, the CRC also meets with individuals or groups daily either at the CRC’s venue or at the guest’s venue. Commissioners appear on talk shows aired on social media, television and radio, and educational clips are also produced periodically for dissemination via these channels. The CRC further created an informational website, where interested persons may also post comments online.

One stark recurrence in the public consultations is the tendency of the Virgin Islands public to turn to U.S. models . . .

There are several interesting and recurring themes amongst the comments being voiced so far. One stark recurrence is the tendency of the Virgin Islands public to turn to U.S. models as they grapple with particular practices that they find irksome. Some proposed concepts include the introduction of term limits for legislators, recall provisions for the Premier and Deputy Premier, direct election of the Premier and Deputy Premier, stripping senior public servants of their permanence, and citizen-initiated referenda (interestingly, a feature in the constitution of the Overseas Territory of the Cayman Islands and a concept that several US states are beginning to rethink!). None of these is a notable feature of the Westminster model of governing that the Virgin Islands has inherited from the U.K. Then again, the Virgin Islands (geographically having Puerto Rico and the United States Virgin Islands as its immediate neighbours to its west) has always had much stronger ties with the U.S. than with the U.K. The familiarity of U.S. concepts therefore holds great attraction for British Virgin Islanders.

Another recurring theme is the tendency to erroneously conflate the concept of political self-determination (one of the CRC’s terms of reference is to examine the next steps for self-determination) with independence. Once the differences are explained, one senses that persons generally would like to see some steps towards greater autonomy and constitutional advancement, not dissimilar to the advances the territory has gained with each constitutional review so far. Back in 2021, the Government undertook fairly extensive public education on self-determination by engaging Dr. Carlyle Corbin, who penned a report on the subject for the Virgin Islands Government using assessment indicators that drew heavily on the United Nations Charter which, as stated by the Attorney General and Minister of Legal Affairs, “mandates certain obligations are placed upon State Parties, such as the United Kingdom, to assist their territories with achieving the full measure of self-governance.”

Putting the hefty Corbin report itself to one side, Dr. Corbin took part in a host of illuminating interviews over a course of many weeks (and it has been announced in the media that Dr. Corbin is undertaking a similar exercise at the moment for Bermuda – another Overseas Territory.) It is therefore not immediately clear why the public in the Virgin Islands should continue to be mystified by the concept of political self-determination. Perhaps one might contend that it is a weighty topic and, with that, I would not argue: it is! By the very nature of self-determining, a territory is expected to progress toward greater internal self-government whilst, at the same time, under a constitution that is an instrument of a legislative body other than its own.

Other weighty, albeit expected subjects have also emerged from the public consultation. Namely, is the Westminster model effective in small island jurisdictions? (Some may facetiously ask whether it is effective even in the U.K!). So, for example, if ostensibly independent statutory commissions set up by the legislature are subject to political interference, accountability could be enhanced through a statutory boards commission (or a “commission of commissions”), which would assure integrity in the selection of board members and functioning of the board. If one were to poke the proverbial bear and to repeat the question that is grumbled in the consultative session off-mic, aren’t the people making up the legislature and executive all cousins and school friends? Momentary humour aside, these are some of the serious realities that the CRC would like the Virgin Islands public to explore and advise on to ensure the constitution reflects the vision of the people of the Virgin Islands.

The reality is that a wholesale alternative to the Westminster model means going back to the drawing board and so is unlikely.

Against that backdrop, however, the reality is that a wholesale alternative to the Westminster model means going back to the drawing board and so is unlikely. That said, there is one obvious element in the last two constitutions that was introduced to address exactly that challenge – representative democracy in very small populations. In the Virgin Islands, four of the 13 House of Assembly members are elected by territory-wide (at large) voting, whilst the other nine are elected in a relevant district constituency – the latter being the traditional Westminster model. How is the public jury weighing in? The at-large/district bundle still needs some tweaking – perhaps the ability for the Premier specifically to be elected at large – again, another proposed break with Westminster.

Conclusion and next steps

Following a Commission of Inquiry in another sister Overseas Territory – the Turks and Caicos Islands – they did not have the opportunity to review their constitution but, in fact, had their constitution suspended. The Virgin Islands has this opportunity, and the CRC is encouraging Virgin Islanders to be part of the process. Due to the fact that Overseas Territories are not independent, our constitutions are not truly supreme as they represent secondary legislation of the legislative process in the U.K.  But, having said that, they are fundamental or superior law to which the local legislature and executive must conform and that must be a good thing to have.

The 2022 constitutional review process gives Virgin Islanders a golden opportunity to help shape and determine (pun intended) their future. Comments and feedback from the public are expected to be reflected in the Commissioners’ Report which is anticipated to be completed by the end of 2023. This will coincide with the outer 12-18 month time-limit set for the review exercise. At that time, the Premier of the Virgin Islands should compose a negotiating team to discuss the recommendations with the Government of the United Kingdom.

Lisa Penn-Lettsome is currently the Chairman of the 2022 Virgin Islands Constitutional Review Commission. She is a lawyer of 30 years having held senior posts in the Virgin Islands public sector and recently concluded 13 years with an international law firm where she was head of the regulatory practice.