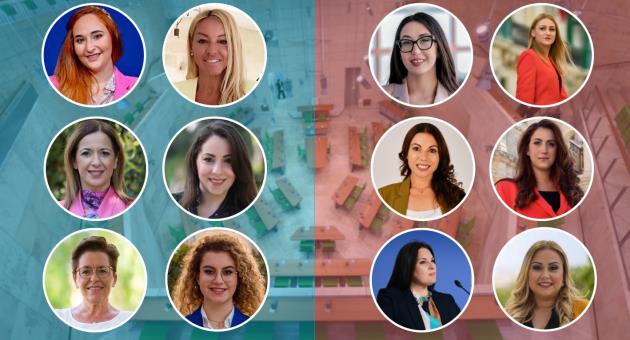 After Malta’s 2022 general election, 12 women were co-opted to parliament through the new “gender-corrective” mechanism added to the Constitution in 2021. While this should have been a win for gender equality, the mechanism has been perceived as a stitch-up between the two major political parties that is more self-serving than serving the nation (and it is now being challenged in court). Coupled with the fact that many once-loyal voters opted to refrain from voting or spoil their vote in this election, will the cynical implementation of the gender-corrective mechanism further catalyze disillusionment with the two main political parties? – writes Victor Paul Borg

Constitutional changes that passed through the Maltese parliament on 14 April 2021 became known as the gender-corrective mechanism. As previously analyzed on ConstitutionNet, these reforms were supposed to augment Malta’s low female representation in parliament. The mechanism is simple if unusual: if one sex makes up less than 40 percent of MPs, then 12 MPs of that sex could be co-opted to parliament (but only if exactly two parties make up parliament). The idea is that this would herald greater gender balance over time and then the provisions would automatically expire once the 40 percent threshold is achieved, or after 20 years, whichever comes first. The 12 seats would be divided equally between the two parties that have dominated Malta’s parliamentary composition since independence in 1964, with each co-opting the six unelected women candidates who would have received the greatest number of votes.

The mechanism kicked in last month after a general election held on 26 March 2022. When the new parliament convened on 7 May, there were 12 new female MPs co-opted through the mechanism. These augmented the 10 female MPs elected on their own steam, altogether amounting to 22 female MPs in a parliament of 79 MPs, equaling 28 percent – Malta’s highest proportion ever.

Far from bolstering parliament’s image through better gender balance, the gender-corrective mechanism has further sapped the credibility of the two main political parties…

Yet – beyond the numbers – the gender-correction mechanism has been roundly denounced and ridiculed in Malta. Far from bolstering parliament’s image through better gender balance, it has further sapped the credibility of the two main political parties – the left-leaning Labor Party (Partit Laburista (PL)) and the conservative Nationalist Party (Partit Nazzjonalista (PN)) – as well as parliament itself. Nineteen percent either did not vote or spoiled their vote, making it the lowest voter representation in decades.

This is a significant development because strong allegiance to political parties in Malta has until now regularly kept participation over 90 percent. Such rivalry in Malta manifests itself in politics as well as other activities – in town feasts, for example, as well as in football. Yet this time round, many thousands of once-loyal voters opted to refrain from voting, or spoil their vote, and that signifies a psychological rupture or turning point.

After the election, the gender-corrective mechanism came to be perceived as a stitch-up between the two parties that is more self-serving than serving the nation – and that has simply made Malta’s ineffective parliament more bloated. In public consciousness, the lack of independent-mindedness and vigour in Malta’s parliament – MPs virtually always vote along the party line, without the need for the party whip to compel MPs to remain in line – has now been bolstered or perpetuated by an additional 12 female MPs to make it the largest parliament per capita in Europe.

The case of candidate Janice Chetcuti was one of the events that electrified public denunciation of the mechanism. Malta uses the Single Transferable Vote (STV) electoral system. Candidates can stand in more than one electoral district – they generally run in two districts – and must resign from one seat if they are elected in both districts. A ‘casual election’ then follows to allow other MPs to inherit the votes, and hence get elected via the casual election.

After the recent general election, candidate Janice Chetcuti announced that she would not be putting herself forward for the casual election because she would be elected via the gender-corrective mechanism in any case. This allowed her party, the PN, to have another (male) candidate elected from that district via ‘casual election,’ and the party lost a chance to have another female candidate added to its tally. As such, the move put the interests and exigencies of the party above the interests of getting closer to gender parity in parliament.

A green party candidate won more votes than two of the co-opted candidates, but she did not make it to parliament as the mechanism applies only to the two largest parties…

Another event that stood out in public consciousness was the lost opportunity of Malta’s green party (ADPD) candidate Sandra Gauci who won more votes than two of the Labour candidates co-opted to parliament. Specifically, Sandra Gauci won 320 first-preference votes, while Naomi Cachia got 251 and Amanda Spiteri Grech earned 96, but the latter two were co-opted to parliament while Gauci remains unelected. Of course, Gauci could not make it to parliament despite winning the greater number of votes, simply because she happened to be in the wrong political party – the gender-corrective mechanism applies only to the two largest parties, PL and PN.

Many voters commenting on social media and on media outlets’ message boards also expressed disdain that a candidate with less than 100 first-preference votes would be co-opted over a male candidate with hundreds or thousands of votes who still failed to be elected. Such critics said that this left voters feeling cheated, and vindicated those who had advocated for party selection or nomination quotas rather than “extra seats” to ensure a minimum proportion of female candidates.

All in all, the implementation of the quota has left a sour taste. The most outspoken of the 12 co-opted female MPs, Eve Borg Bonello, has since said that she would have voted against the mechanism – and would still vote against the mechanism now or in the future – even though she benefitted from it. Even the Women’s Lobby – the umbrella organization for women’s NGOs in Malta – denounced the mechanism for being a manipulative tool that put the interests of parties before the interests of women’s participation. Anecdotal evidence suggests male candidates told voters to vote for them because women candidates would be elected via the mechanism anyway, but it is not known whether this potentially diverted votes that could otherwise have gone to women candidates.

A Constitutional Court challenge: discrimination with a twist

The gender-corrective mechanism is now being challenged in the Constitutional Court by independent election candidate Arnold Cassola. The lawsuit contends that the gender-corrective provisions are in breach of the Maltese Constitution as well as Article 21 of the EU Charter of Fundamental Rights and Article 14 of the European Convention of Human Rights on grounds of discrimination.

Cassola is mounting a court battle on two lines of attack. Firstly, he said that two women were interested in joining him in a political alliance, but they lost interest when they realized they would not be able to benefit from the gender-corrective mechanism – hence this is discrimination by party, and discriminatory to Cassola. Secondly, he argued that since the mechanism is limited to the two dominant parties, a vote for any female candidate of either of the two parties carries greater weight than a vote for a female candidate who hails from another party or who stands as an independent.

The case of Sandra Gauci, the green party candidate, represents this point resoundingly. As outlined above, Gauci got substantially more votes than two of the women co-opted. One vote for Amanda Spiteri Grech – co-opted by PL after receiving 96 first-preference votes – was therefore worth more than three votes for Gauci, who received 320 first-preference votes. Hence the claim of political discrimination against voters.

A court complaint against the gender-corrective mechanism argues that it serves to “perpetuate the duopoly” in Maltese politics.

Cassola also argued in his case that the mechanism serves to “perpetuate the duopoly.” This refers to the two large parties who dominate all political power and take turns in government, in a system that makes it very hard for third parties to make it to parliament. In Malta’s electoral system, there is no national vote threshold or tally that would translate into a seat or more than one seat in parliament for a small party that gets a national vote tally above that threshold. MPs in Malta are elected from electoral districts, and small parties, especially the green party, have found it difficult to make a breakthrough into parliament due to their candidates having insufficient votes in each district.

The gender-corrective mechanism has brought longstanding issues into sharper relief, and demonstrated the undemocratic nature of a political system that favours the “duopoly” at the cost of any other party. In a sign of changing winds, as already pointed out, a record 19 percent of voters either did not vote or spoiled their vote. The PL and PN both lost an absolute number of votes despite the number of voters being four percent more than in the previous election in 2017. At the same time, the small parties doubled their vote tally. The two parties’ credibility was already the big story of the last election, and the bad press surrounding the gender-corrective mechanism after the election may have further eroded the parties’ credibility.

This suggests a fragmentation of votes that has characterized elections in European countries in the past decade or more. A survey commissioned by the President’s Office in 2020 found that eight-in-ten people always voted for the same party. As such, these voter-abandonment shifts are tectonic because of the tribal nature of Maltese politics, with intense partisanship having delivered unassailable block votes to the two parties since independence in 1964. This election has shown a dramatic change in public opinion, with the cynical implementation of the gender-corrective mechanism likely catalyzing disillusionment with the two main political parties.

Victor Paul Borg is a Maltese journalist whose work has been published around the world, and currently mostly does investigative reportage and analyses that are published at https://victorborg.com

Click here for updates on constitutional developments in Malta.