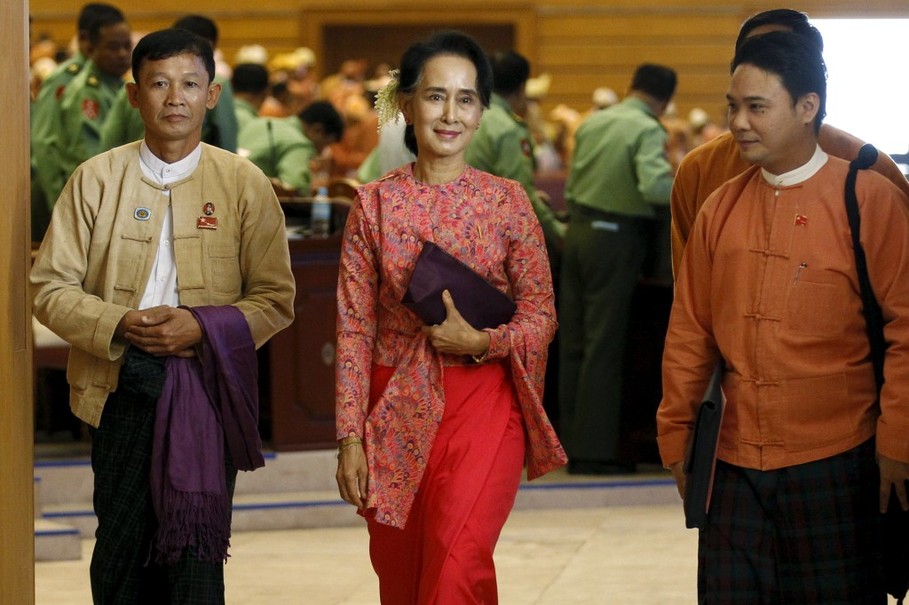 Aung San Suu Kyi - leader of the NLD (photo credit - JakartaGlobe/Reuters
<p>The party of Myanmar's Aung San Suu Kyi has instructed its lawmakers not to leave the capital, rank-and-file members said, fueling speculation of a legal bid to sidestep a clause in the constitution barring the democracy champion from the presidency.&nbsp;Eight new lawmakers from the National League for Democracy (NLD) said the party's top governing body, the 15-strong Central Executive Committee (CEC), had told them to stay in Naypyitaw, where the NLD-dominated parliament began its five-year term this week.&nbsp;"We are not allowed to take any leave until the end of next week," said a new NLD member who did not want to be identified. "One of the NLD CEC members said there may be some important matters or emergency bills coming up next week."&nbsp;</p>
Read the full article here: JakartaGlobe/Reuters

L N BHOLA 25 February 2016
This is healthy democracy. Aung San Suu Kyi - leader of the NLD has a strong vision for the country.So she has the mandate to change old riders and make room for herself by making radical changes in the constitution itself. Content from ConstitutionNet.org. Find the full article here: http://www.constitutionnet.org/news/nld-travel-ban-fuels-talk-constitutional-change-allow-suu-kyi-become-president-myanmar?utm_source=newsletter&utm_medium=email
L N BHOLA 25 February 2016
No democracy is TOTAL without its citizens' participation to question Government and its Governance. Unless this feat is achieved,the country passes through trials and tribulations. Whether Myanmar is a Democratic country at baby stage or not,its leader Aung Saan Suu Kyi has strong vision for her country.Being highly qualified, she has all the ammunition to take the country in the right path in the coming days.