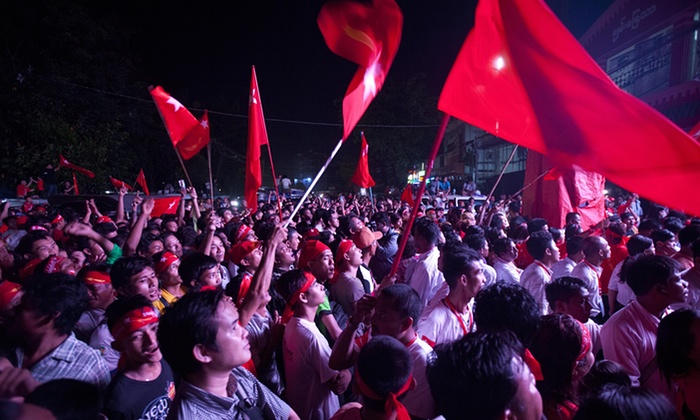 Supporters of Aung San Suu Kyi’s National League for Democracy party cheer as they watch the results of the Myanmar general election on an LED screen in Yangon. (photo credit: Khin Maung Win/AP)

Myanmar’s election on November 8 resulted in a decisive victory for Aung San Suu Kyi’s National League for Democracy, able to grab 77% of elected seats in Parliament and dwarf the military-backed USDP in government.

As the news spread, the road in front of the NLD headquarters became a stage for celebration for the dozens wearing red t-shirts as in the party’s flag. But before dancing even ended questions over what would happen next already came to the fore.

Despite a striking result, Suu Kyi herself has repeatedly said that “genuine change” in the country was dependent on Constitutional change. The 2008 Constitution contains a clause barring anyone married to a foreign national or who has children with foreign passports from becoming president. Changing this section would require a nationwide referendum and overcoming the veto power of the military, as constitutional reforms have to be approved by 75% of MPs. A challenging task, as the same Constitution guarantees the military 25% of seats in Parliament and three key ministers such as defence, home affairs and border affairs.

Against this backdrop, the wish to ‘change the Constitution’ to allow an effective democratic transition has been a sound bite of Suu Kyi’s electoral campaign and one of the main points of the party’s manifesto.

The issue at stake, however, is not only the future role of the 70-year old Nobel Peace laureate. A crucial point for the stability of the country will also be the successful creation of a Federal system that provides an answer to decades of conflict with ethnic minorities. Structural reforms are also needed to convince foreign investors that a real democratic transition is in the making, while incompatible with the presence of the military in Parliament.

The scale of the challenge is clear. Yet, memories of what happened in 1990, when a similar electoral outcome was obliterated by the military and Suu Kyi sent to house arrest, are still vivid. Celebrations outside NLD’s headquarters were visible and loud, but not so much in the rest of the city, following the party’s wish not to upset the current powers.

The main reason being that the Constitution establishes a long transition period of three months after the elections before forming a new government. It is therefore a delicate time and Suu Kyi’s wish to pursue a cautious approach was expressed at a recent meeting with ambassadors: “She made it clear that insisting on Constitutional changes during this transitional period is not her priority. What will happen once the government is formed, instead, nobody knows,” says a diplomatic source present at the meeting who does not want to be named.

To add to the uncertain scenario, the Nobel Peace laureate has surprised many with an aggressive approach before the elections, including stating that she will be ‘above the president’. She now has two options in front of her: insist on the most controversial constitutional changes with the risk of upsetting the military – who still holds veto power over constitutional changes; or pursue the more conciliatory and viable route of compromise.

The big question is which section of the Constitution to try and change first and which is the red line not to be crossed - namely, what kind of reassurances the NLD will have to give to the military to ensure a peaceful transition.

“We won 80% of elected seats and because of this majority we will tackle constitutional issues from the beginning, including Suu Kyi becoming president,” NLD spokesperson U Win Htein tells Constitutionnet.org. “But it will be a long process - let’s take a look at what happened in South Africa or other countries: we are talking about years. It is not an easy task.”

Despite the odds, the military itself might see an incentive in the very first reasons that initiate the reform process: the wish to get out from under China, opening up to the West.

“This transition is largely the result of the military not wanting to be [swallowed] by China and being concerned about its influence: it is important to recognise this role,” says Melissa Crouch, lecturer at Law Faculty of University of New South Wales.

To reinforce this path, foreign investors need to be convinced that Myanmar is a reliable place to do business: “The NLD will make the point that if the military is really serious about moving the country forward in terms of economic reforms, western investors will need to see structural changes. It is not going to happen if we have the military in Parliament. You are not going to convince the global community that you are actually democratizing the place.”

And there might be another reason why the military could gradually embrace changes: “It is not a unified block. In the capital Nay Pyi Taw, the results showed that civil servants and military officials overwhelmingly voted for the NLD. There are clear signs that the military is not homogeneous and there are different opinions within it, although in the end it will come down to convincing the top leaders,” stresses Crouch.

However, recent attempts to amend the Constitution on these crucial matters have achieved very limited success. A bill to remove the current army’s veto over constitutional changes did not get the required 75% majority of MP’s votes in June. Other proposed amendments did not pass either, showing the military’s resistance to reduce any of its powers, while allowing other kind of reforms.

In July, only a change related to a sub-section of section 59, requiring that a candidate be “well-acquainted with the affairs of the Union such as political, administrative, economic and military” reached the quorum. The term “military” has been changed into “defence” to weaken the link to the Tatmadaw, in a ‘soft’ attempt by the military to change image.

Myanmar has been marred by ethnic conflicts for decades and there is ongoing fighting in areas such as Shan and Kachin. Federalism is therefore one of the main constitutional issues of this transition process and an even more sensitive one after the poor performance of fragmented ethnic parties in these elections.

A National Ceasefire Agreement has been signed by eight groups out of 15 in October, in an attempt by president Thein Sein to secure a deal before the elections. The possibility of including the remaining groups will also depend on whether the next government decides to pursue constitutional changes aside of the peace process or to include them in the bargaining process. Officially, the position of the NLD is adamant: “National reconciliation and a federal constitution are our priorities,” says U Win Htein, adding that “the peace process and the constitutional changes will go hand in hand.”

Proposed amendments which sought to grant greater autonomy to local governments were turned down by Parliament and only limited changes were accepted in July - referring to schedules 2 and 5, which define what issues State and Regions can legislate on and how to raise taxes. To the great disappointment of ethnic leaders, the amendment to section 261 to give state and regional parliaments rather that the president the power to choose chief ministers was rejected. Military representative General Tint San justified the decision in Parliament in June, arguing that “Decentralization can normally reduce armed conflict. But we have found the weakness is that armed conflict can also worsen because of the desire to extract natural resources and to access more power.” The rejection caused anger among ethnic leaders, some linked to armed groups at war with the Tatmadaw. Shan MP U Sai Thein Aung was reported by local media saying that “if the constitution is amended to have equality, it would be easy to make a ceasefire and eternal peace.”

What can be done now

While agreeing on the fact that it will be a long haul before completing a truly democratic transition, some analysts stress that there is scope for action even within this Constitution. As it states negative rights and not positive ones, some laws, ranging from licenses, to businesses, to how to collect fees are all goals that can be achieved without changing the law.

However, the main challenges the still-to-be-formed government will have to face may relate to other inconsistencies of the system, such as the lack of an adequate bureaucracy.

“Suu Kyi’s biggest challenge might not be the military or changing the constitution, but the fact that there isn’t a bureaucracy that can be reoriented and reformed [quickly],” says Matthew Arnold of Asia Foundation. “It is slow and inefficient because it’s there to serve this country how it has been for 60 years [of military dictatorship].”

And, ultimately, the question is where people’s expectations really lie. As important as constitutional change is to Myanmar’s democratic progress and long term development, most people seem to have more immediate concerns on their minds: improving healthcare, education, unemployment and wages are only some of the desiderata of the many interviewed outside the NLD heardquarters during celebrations. And with Suu Kyi set to run the country “above the president” anyway, amending the constitution is not likely to resound as a priority with her voters.

The real risk for the NLD will be indeed not being overwhelmed by the expectations of its voters after 60-year of military dictatorship and the transition government they have just rejected, not by the Constitution.