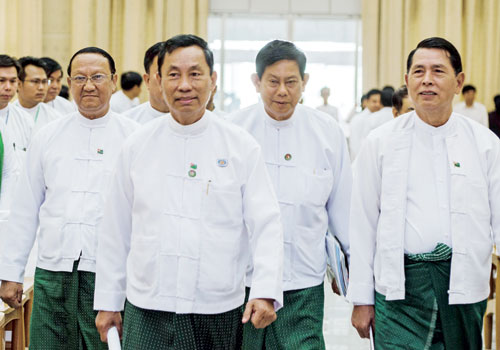 Speaker Thura U Shwe Mann attends a USDP meeting on August 12, flanked by vice chairs Thura U Aye Myint (left) and U Htay Oo (right) [photo credit: The Myanmar Times]
<p>Thura U Shwe Mann has been ousted from his post as leader of the ruling Union Solidarity and Development Party after a midnight police swoop on party headquarters. The removal of the party chair was one among several overhauls of key USDP figures announced yesterday in a rupture that exposed long-rumoured power struggles between different factions of the military-aligned party.&nbsp;</p>
Read the full article here: The Myanmar Times