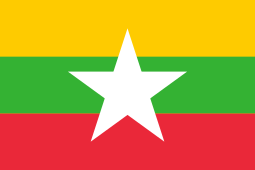 Flag of Myanmar
THE Pyidaungsu Hluttaw (bicameral legislature) on Tuesday approved an urgent proposal to amend the controversial 2008 constitution, despite all military MPs voting against it. U Aung Kyi Nyunt, a member of the Amyotha Hluttaw (Upper House) Bill Committee submitted the urgent proposal on behalf of the ruling National League for Democracy (NLD). He explained that the proposal is to form a committee within parliament to “carry out the process of amending the constitution.”
Read the full article here: Myanmar Times