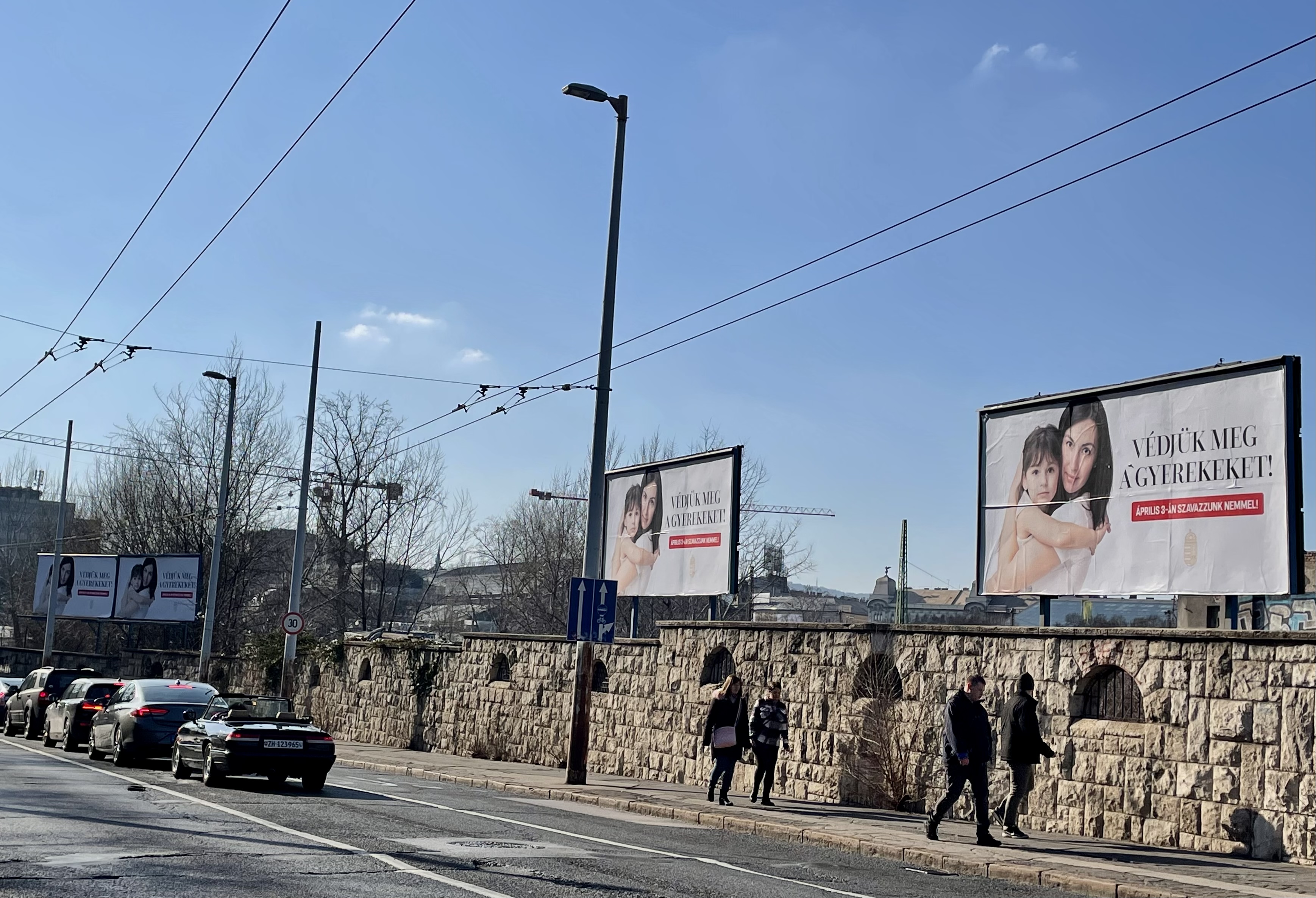 An upcoming referendum in Hungary, coinciding with national elections, will test the popular support of Prime Minister Viktor Orbán and potentially provide a veneer of democratic support for anti-LGBTQI+ measures being challenged by the European Commission. Meanwhile, previously fractured opposition parties have united behind a candidate, Péter Márki-Zay, who is running on a platform of constitutional change to restore constitutional democracy. The upcoming elections and referendum therefore pit Orbán (seeking a fourth consecutive term) against a united opposition and, consequently, offer opposing visions for the future of Hungary – writes Professor Renáta Uitz

Hungary is preparing for a general election and a national referendum on 3 April 2022. The vote will test the popular support of Prime Minister Viktor Orbán, a prominent advocate of illiberal democracy, for the third time in a row. Since mid-February the streets have been lined with billboards featuring a young mother guarding an innocent child. These are the posters of the government’s referendum campaign, urging voters to say ‘no’ to anything that puts children at risk – including, apparently, the candidates of the opposition.

Since regaining power in 2010, Orbán’s government relied on a two-thirds majority in Parliament to adopt a new constitution, constitutionally entrench illiberal Christian identity politics, undermine judicial independence and adopt an electoral reform strongly favoring the incumbent. The opposition has long been fractured, marred by personal and ideological differences. To maximize their chances, in October 2021 six opposition parties (DK, Jobbik, LMP, Momentum, MSZP, and Párbeszéd) used a competitive popular primary to select a single candidate. The winner, Péter Márki-Zay, is an independent conservative mayor of a mid-size town with no party affiliation; his platform includes constitutional change to restore constitutional democracy.

Under the Fundamental Law, formal constitutional change would require two-thirds majority support in parliament. As such, a sweeping opposition victory is rather unlikely, and proposals seek solutions that work around the two-thirds majority requirement. Hungary’s most senior judges condemned such proposals as plans for a constitutional coup in the summer of 2021. Options for restoring or reclaiming constitutional democracy after the elections must be assessed against this background, in the shadow of Russia’s military invasion of Ukraine, just across Hungary’s eastern border.

The race on referenda

To mobilize the government’s supporters, in July 2021 Prime Minister Orbán announced plans to hold a referendum in order to ‘protect’ children from LGBTQI+ propaganda. The referendum campaign provides ample opportunity to reinforce traditional family values and to stigmatize the LGBTQI+ community (and their cosmopolitan allies) in the familiar polarizing fashion of friend-enemy populist identity politics.  In response, the mayor of Budapest (who had prime ministerial ambitions at the time) launched a referendum initiative to halt the government’s efforts to build a large campus for a Chinese university (Fudan) in Budapest – a development and foreign investment project that has come to symbolize Orbán’s authoritarian leadership network and oligarchic inclinations.

To reinforce their effort, the opposition proposed a bill to remove the long-standing ban on holding a referendum on the same day as national elections. In an unusual turn of events, in November 2021 the government lent its support to the bill in Parliament. This unlikely move put the opposition parties’ ability to mobilize on multiple issues (including multiple referenda questions, plus constitutional reform) to a very public test.

Under Article 8 of the Fundamental Law, a referendum may be initiated by the President, Parliament or through popular initiative. Upon the request of 100,000 voters Parliament may put a question to referendum, while upon the request of 200,000 voters it must do so. In November 2021, shortly after amending the law to allow referendums on the same day as national elections, the Parliament approved the following four referendum questions proposed by the government (while the opposition abstained from voting):

In a formal, constitutional and legal sense the referendum on “child-protection measures” proposed by the government (and upheld by the Constitutional Court) is superfluous.

In a formal, constitutional and legal sense the referendum on “child-protection measures” proposed by the government (and upheld by the Constitutional Court) is superfluous.The Hungarian Parliament has already adopted a law to shield children from so-called LGBTQI+ propaganda in June 2021. This  implements a constitutional amendment adopted in December 2020 that makes it a state obligation to ensure the education of children according to their biological sex at birth, in line with the values of Hungarian constitutional identity and Christian values (Article XVI(1)). It also entrenches the heteronormative definition of marriage in the Fundamental Law (Article L(1)), clarifying that “the mother shall be a woman, the father shall be a man.” In July 2021 the Venice Commission found that “there is a real and immediate danger that the amendments will further strengthen an attitude according to which non-heterosexual lifestyles are seen as inferior, and that they will further fuel a hostile and stigmatising atmosphere against LGBTQI people.” The European Parliament called the “child-protection” law state-sponsored discrimination on the very day it entered into force.

Its legal futility aside, the upcoming referendum is expected to provide these “child protection” measures with a veneer of democratic support in preparation for legal challenges brought by the European Commission, an effort to display popular support for the government’s efforts to contest the primacy of EU law and European human rights standards. More immediately, based on remarks in the media, the referendum campaign will serve as a pretext for additional government spending on anti-LGBTQI+ propaganda during the 2022 election campaign.

Of the five referendum questions initially proposed by the opposition, the National Election Commission certified two in August 2021: one concerning the Hungarian government’s financial contributions to the Fudan University project, and another that would expand eligibility for unemployment benefits. In December 2021, the Supreme Court (Kúria) rejected judicial review challenges against these certified questions, opening the way for collecting the required 200,000 signatures. Although technically the law leaves four months (120 days) for this initial step, the opposition needs to allow time for the National Election Commission to certify the signatures and for potential legal challenges. Signatures collected by the opposition were submitted for certification in mid-January, making the opposition’s referendum too late for a public vote on 3 April.

Coup mongering: from murmurs to countermeasures

The united opposition is entering the 2022 general election with promises of political and constitutional change. Cyberattacks during both rounds of the opposition primaries gave a taste of the contestation ahead.

In November 2021, leaked audio tapes surfaced of National Assembly Speaker Kövér referring to the opposition as the most significant national security threat…

More recently, in November 2021, leaked audio tapes surfaced of an address Speaker Kövér had made to the national security services in February 2020, where he referred to the opposition as the most significant national security threat. The joint opposition responded with a statement that Speaker Kövér “incites against the united opposition in a manner reminiscent of the darkest dictatorships and exerts political pressure on secret service leaders.” The opposition’s indignation is easy to explain: in the face of mounting pressure, the Hungarian government continues to insist that it used the Israeli NSO firms’ spyware, Pegasus, in a lawful manner.

It is in this climate that coup mongering in the highest constitutional offices continues. In December 2021, the President  of the Constitutional Court, Tamás Sulyok addressed an open letter to the President of the Republic, the Prime Minister and the Speaker of Parliament to seek their assurance for the irremovability of constitutional justices via unconstitutional means. As if responding to this call, in late December 2021 Orbán himself announced a 10 per cent increase of police and military wages, with an additional six-month bonus to be paid early next year.

It is against this backdrop that the upcoming referendum on "child protection" has assumed its true character: it is a test of popular support for Prime Minister Viktor Orbán – or for the democratic opposition. The government has little to lose. Speaking in formal legal or constitutional terms, if the referendum is successful, it will confirm popular support for constitutional and legal measures in place. If turnout is lower than required for validity, it will not affect the legal validity of measures already in place, but will still bring pro-government voters to the polls. Thus, in addition to its election campaign, the opposition may still need to enter into a campaign against the government's referendum, urging voters to vote against protecting their children and grandchildren.

Russia's recent military invasion in Ukraine – just across the Hungarian border – presents a new opportunity for the opposition to mobilize against an illiberal leader who is favored by election rules. Orbán's response so far has been carefully calibrated, to please numerous audiences at home and abroad: he supported EU sanctions against Russia and opened the border for refugees; this was quickly followed by the government's refusal to spare weapons of its own in aid of Ukrainians and then to let an EU arms donation to Ukraine cross Hungarian territory. The government's arguments about needing its full military capacity to protect Hungarians from stray bullets sound tone-deaf at best. Importantly for the opposition, focusing on Russia's actions diverts attention from the referendum debacle and highlights the stakes of living in a constitutional democracy – a regime where incumbents are unseated by voters at the polls.

Renáta Uitz is professor of comparative constitutional law at Central European University in Vienna and the co-director of CEU’s Democracy Institute in Budapest.