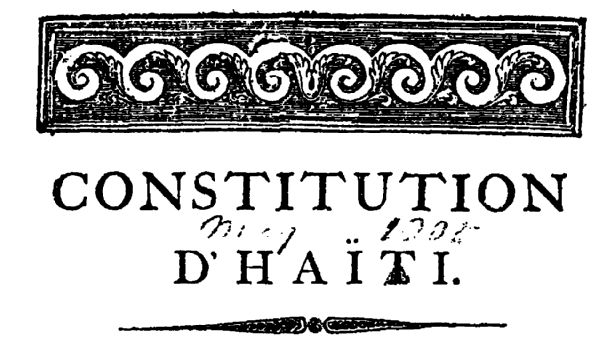 The plan for constitutional reform poses a challenge and has been criticized by some local actors because they argue that the current 1987 Constitution specifically prohibits any modification of the constitution through referendum. For others, the timing is not right as this constitutional reform has come on top of a multidimensional Haitian crisis that has both structural and cyclical aspects.

Haiti gained its independence from France on 1 January 1804 after the defeat of Napoleon's troops following the slave revolt. The country has since had 23 constitutions without counting the amendments, with each lasting on average a little more than eight years. Many governments sought to change the constitution, often acting through undemocratic methods, and in the absence of a tradition of free, fair and competitive elections.

Before 1950, the Chamber of Deputies elected the president of the republic. One of the most dictatorial regimes has been that of François Duvalier and his son Jean Claude. The two totaled 29 years in power. In the 1964 constitution, Duvalier established life presidency as a mode of governance. In 1986, a popular revolt sounded the death knell for the Duvalier regime. To herald a new basis, a constituent assembly was formed in 1986 to endow the country with a new constitution.

The major innovations of the 1987 constitution included guarantees of freedom of the press, direct universal suffrage, decentralization of powers and greater participation of the provinces in governance, a dual executive with a President and a Prime Minister who is appointed by the President from among members of the party with a majority in Parliament (Chamber of Deputies and Senate) and the independence of key state institutions. To prevent governments from making constitutional changes or proposing a different one, the drafters of the 1987 Constitution introduced rather difficult amendment mechanisms.

In particular, to preclude the experience under Duvalier who resorted to a referendum to establish a life presidency, the constitution specifically provides that ‘[g]eneral elections to amend the Constitution by referendum are strictly forbidden’. Furthermore, the constitution provides that a government under which an amendment was initiated cannot benefit from it. All this is for some local actors central to the problematic of the ongoing constitutional reform process.

The 1987 Constitution and problems of governance

The Constitution has bequeathed upon the country a democratic dispensation. This constitution establishes a participatory and decentralized political system. Nevertheless, in a context of anemic economic growth, the promises of robust participation and decentralization have fallen short. Haiti’s economy remains unintegrated in the international market, while the national budget generally continues to receive significant support from the international community. In addition, with an electoral cycle every two years in a country that lacks a tradition of consensus, electoral periods often occasion heightened tensions and serious political crises.

Moreover, the Haitian political system of a dual executive is often a source of conflict and political contestation between the President and Parliament on one side, and between the President and the Prime Minister on the other. In the 33 years since the adoption of the constitution in 1987, the country has had 19 presidents and 23 prime ministers.

The constitution has generated critical governance and efficiency challenges.

The quadruple questions on the Who, When, How and What of constitutional reform remain on the agenda. Regardless of the actors, the arguments in favor of a constitutional reform concern the following points: the inability to adapt the dual executive system to Haitian society, the degree of decentralization which is difficult to sustain compared to the economic level, the heavy burden of the charges of two legislative institutions, namely the Senate and the Chamber of Deputies, and the frequent rhythm of electoral cycles. With all these considerations and their assessment, the government believes it is necessary to move forward the path of constitutional reform.

The government, as a major actor empowered by the 1987 constitution to propose amendments, took the initiative to move the reform project forward according to its vision, timetable and goals. This government decision has elicited different responses.

Many local actors, including opposition political parties and some civil society organizations, disapprove of the government drive based on two main legal arguments. First, they emphasize that the president's term expires on 7 February 2021 and that it is not appropriate at the tail end of his term to pursue radical constitutional reform. This disagreement over the end of the president’s term is the result of a constitutional provision giving rise to various interpretations rooted in a constitutional amendment enacted in 2012. On the one hand, under this constitutional amendment, the President is elected for five years. On the other hand, under this same amendment, ‘an elected President enters into his functions on 7 February following the date of his election. In cases where the ballot cannot take place before 7 February, the elected President enters into his functions immediately after the validation of the ballot and his mandate is considered to have commenced on 7 February of the year of the election’. Some local actors have relied on this provision to question the mandate to engage in a constitutional referendum before fresh presidential elections.

The other legal argument crucially relates to the amendment mechanisms prescribed in the constitution and also to the prohibition against constitutional change through referendum. Having been unable to find common legal ground, many of these actors have turned to the political arena to resolve this conflict. Despite the legal basis of the contestation, the chances that the issue will be authoritatively resolved in the Court of Cassation are low.  The 1987 Constitution provides for a Constitutional Council to interpret the constitution, but this is yet to be established.

The international actors are also aware of the governance problems linked to the 1987 Constitution. They have been called upon on a recurring basis to contribute to the national budget and for the financing of the cyclic and interminable elections. Nevertheless, international actors have generally been reluctant to publicly express their positions regarding constitutional reform. It is nevertheless believed that they would not reject the need to change the constitution.  In a recent report, Ambassadors of the Core Group (an ad hoc diplomatic group composed of the Special Representative of the United Nations Secretary-General, the Ambassadors of Brazil, Canada, France, Germany, Spain, the European Union, the United States of America, and the Special Representative of the Organization of American States) called for ‘accelerated preparations of the upcoming elections and call[ed] on the country's leaders and institutions to urgently publish an electoral calendar’. There was only an implicit reference to the constitutional referendum.

Domestically, the influential Haitian Episcopal Conference recently released a paper signed by all bishops in which they emphasize the importance of finding ‘the right and consensual way’ towards constitutional reform.

There have been two key stages in the process of constitutional reform. First, the government adopted in October 2020 a presidential decree setting up an Independent Consultative Committee made up of five members, including a former General of the Army, a former Provisional President and a woman. But the opposition groups argue that this committee is not independent because all members have been appointed by the government. According to the decree, this committee will draw up the draft of a new constitution within two months. However, in its detailed timeline, the committee indicates that the final draft will be ready on 26 February. The committee indicates that a preliminary draft will be drawn up ‘following exchanges and discussions with the various actors and groups in society and the diaspora’. This draft will then be submitted to CSOs, political parties and state institutions for an assessment, based on which a final draft will be prepared.

The second step will be the popular ratification of the draft constitution in a referendum. As noted above, for opposition groups, this referendum constitutes the main legally contentious issue in the ongoing reform process. At this point, there is no referendum framework or documents to guide how the referendum will be organised. The process is nevertheless moving forward amid some storms of protests. The President has insisted that he campaigned on a promise of delivering a new constitution and his victory indicates the popular legitimacy of pursuing constitutional reform.

The outcomes of the ongoing constitutional reform process are not certain now. However, it is likely that the problematic aspects in the constitution discussed above, including the dual executive and bicameral legislature, will be subject to profound changes. Aspects relating to the mode of government, decentralization, the bicameral parliament, elections and the mandates of elected officials will be reviewed. Some innovations are also expected, particularly with regard to the political representation of women and the Diaspora.

The exact details of the proposed changes will emerge once the draft is revealed. Considering the broad agreement in favor of constitutional reform, the ultimate outcome of the reform project will depend on the engagement and compromises on the content of the reforms between the government and many other groups. Such engagement could soften the position of some and allay the fears of others, and spare the country from possible crises. Whether such engagement and extra-constitutional political agreement will justify the ongoing reform process, only time will tell.

Clément Jude Charles is a manager and lawyer and member of the Port-au-Prince Bar.