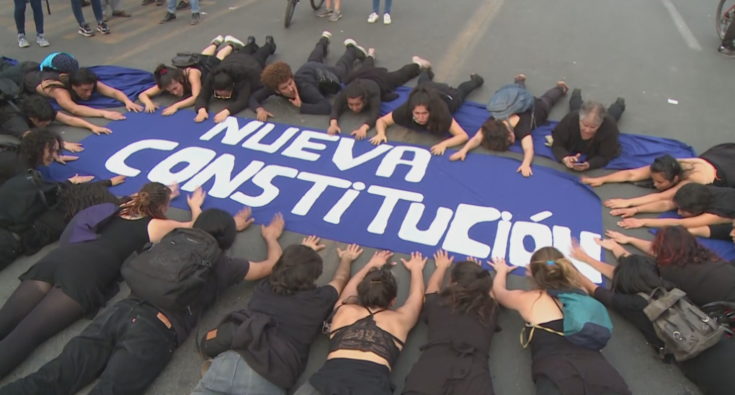 While the Chilean constitutional referendum has been in the news, an amendment enacted prior to the referendum limited re-election of legislators, mayors and other officials. While the motivations behind the rushed amendment amid impending comprehensive constitution making process remain unclear, the timing may prove crucial in the unlikely case of failure to produce a new constitution – writes Professor Claudio Fuentes-González.

The National Congress approved the amendment amid high social discontent towards the political class, and an unpopular right-wing government, with no control over the political agenda and overwhelmed by the COVID-19 pandemic. Crucially, the reform comes amid plans for a comprehensive constitutional reform process to replace the Chile’s Pinochet era constitution. The term-limit restriction can be seen as a mechanism to rejuvenate the democratic system to stem further delegitimisation of political institutions. Although this measure was not among the main demands (pensions, education, health, access to water, transportation, abuse and corruption) of the social explosion [estallido social] of October 2019, both the National Congress and the executive branch saw in this reform an opportunity to help to re-legitimise the political system.

The term limit also applies for incumbents who have served defined consecutive terms.

While experts have assessed the Chilean National Congress as highly institutionalised and professionalised, citizens assess legislative work as being of poorer quality than in other Latin American countries. This loss of trust in the legislature presents a marked downward trend in the last decade, with most people preferring new legislators over incumbents for a seat at the National Congress. The reforms, at last, give constitutional effect to this popular sentiment.

For and against re-election

While limits on presidential re-election have become ubiquitous, limits on terms of legislators remain uncommon. The issue grew in prominence in the early 1990s in the United States, where a citizen movement was formed to promote the idea of limiting re-election to Congress, but it was largely speculative. Nevertheless, calls for bans on re-election continue to re-emerge during debates on constitutional changes, as is currently the case in Chile.

On the one hand, re-election is touted as a solution to the challenge of low turnover of legislators leading to isolation from citizens. Re-election guarantees emergence of new political personalities in Congress, the political and central institution of representative democracy, regardless of the country’s form of government. Indefinite re-election is argued to incentivise legislators to respond to short-term electoral calculations over long-term national interests. Restrictions on re-election would enhance the figure of the citizen-legislator or ‘amateur legislator’, and, by ensuring regular turnover, could arguably help to reduce the chances of corruption.

On the other hand, experience, freedom of choice, accountability and careerism are invoked to reject limits on re-election. A Congress plagued by newcomers may not sufficiently check the executive, and could lack people with experience in legislative work. The idea of the amateur legislator is also arguably a mere fiction. Term limits also arguably violate freedom of choice, because they reduce competing alternatives. Furthermore, term limits may reduce incentives for legislators’ accountability to their constituents as they remove the possibility of reward for good performance. Furthermore, term limits could lead to party fragmentation and reduce their cohesiveness. The frequent turnover of membership could also delay production of new regulations due to the accommodations and adjustments necessary to reconcile interests within the parties.

Despite the popular and growing political support for term limits on legislators among Chileans, the sentiment was never translated into constitutional policy. For some time now, several Chilean politicians have emphasised that incumbency has negative implications for democracy. Legislators from all political sides have affirmed that unlimited re-election in electoral competitions can put the democratic system at risk (Burgos et al. 2012).

Notably, several bills to restrict re-election were tabled particularly since 2006, which marked the consolidation of Chilean democracy. This reform drive built on the momentum of the significant constitutional reform approved in 2005. Moreover, some politicians began to see the slow circulation of political elites, expressed in public positions being occupied by legislative incumbents for several terms, as detrimental to democracy and that it would be in their interest to replace the old leadership associated with the military. As a reflection of this political shift,

thirteen draft bills proposing to limit legislative terms have been presented during the current presidential period (2018-2020).

The convergence of political and popular aspirations ensured the smooth sailing of the amendment.

Since 2009, different Chilean presidential candidates with divergent political allegiances have also proposed to restrict legislative incumbency in their political manifestos. At the end of President Bachelet's second government, her government proposed a draft constitution which would have limited re-election of legislators to two consecutive terms (with a maximum total of three terms). The current president in his 2019 annual report, noting the modernization of the National Congress, acceleration of processing times and improvement of the quality of legislation, announced that his government would promote limits on the re-election of senators, deputies and mayors. He proposed to accompany his reform proposal with a reduction of the number of deputies from 155 to 120 and senators from 50 to 40.

Both the centre-left and right-wing coalitions, in the government and the opposition, have in the past presented draft bills to regulate re-election of legislators. Crucially, there was a growing trend towards inter-party support in drafting laws, particularly since Piñera´s first government (2010-2014). This feature means that both majoritarian political coalitions started to work together to regulate incumbency, signalling political convergence on this topic. Alongside the broad popular support, this political convergence on incumbency ensured the largely smooth sailing of the amendment.

Term limits on legislators are uncommon around the world, but not in Latin America. Chile joins at least four other countries in this region that impose different restrictions, namely, Bolivia, Ecuador, Peru, and Venezuela.

The origins and expected process are unparalleled in Chilean republican history. For the first time since 1833, the new constitution will not be written by a small commission of notables or government appointees, nor will it be an imposition of an authoritarian regime. Instead, 79 per cent of voters chose a fully elected Constitutional Convention, rather than a ‘Mixed Constitutional Convention’ composed of half elected and half appointed members, to draft the forthcoming constitution. That half of the members of the elected body will be women is unprecedented in the history of constitution-making worldwide.

That half of the members of the Constitutional Convention will be women is unprecedented in the history of constitution-making worldwide.

The next major constitutional milestone is the election of the members of the Constitutional Convention, planned for 11 April 2021. This body will meet for nine months, which may be extended only once for three more months. Although only a few months remain before the elections, there are still issues that must be resolved, such as the number of seats reserved for indigenous peoples, the role of independent candidates, whether or not political parties will include independents on their lists of candidates, and ultimately the substance of the expected constitution, which was central to the popular mobilisation behind the demand for reform.

There is, however, a long way to go and success is far from a certainty. The political chessboard is in turmoil. The ruling right has been divided regarding whether or not they wanted a new constitution. Indeed, the result of this plebiscite does not mean that Chileans turned centre-left overnight, but instead denotes the division of the right-wing around General Augusto Pinochet's main legacy, the 1980 political constitution. This situation demands a great effort, especially within the right coalition, to agree on priorities and a competitive list of candidates.

Whatever the substantive changes, a new constitution would mark a symbolic break from Chile’s authoritarian past.

In the case of the centre-left, considering its more significant party fragmentation and generational differences, agreements around the Constitutional Convention are even more complicated. Although this broad group agrees on the need to formulate a new constitution, militant and independent candidates, leaderships, and agreements regarding content may not be easily achieved.

Beyond any substantive change that the reform process may result in, it would achieve the symbolic objective of dismantling the military and authoritarian legacies of the 1980 constitution and reconstituting the nation.

The question remains as to why the government rushed to pursue the amendment limiting term limits, with the knowledge that this issue could have been addressed and will certainly be reconsidered, in the new constitution making process under the Constitutional Convention. One possible explanation is that both the ruling class and the opposition decided to legislate on an issue that was very popular, although they disagreed with the specific measure they were legislating on. Moreover, it may be that the government intends to intervene in the constitutional process indirectly since with this it could manage to retake control of the political agenda at the expense of a fragmented opposition without clearly identifiable leadership.

Regardless of the political calculations behind the move, risks of failure to produce a new constitution cannot be excluded. In such a scenario, the amendments limiting term limits could take a life of their own.

Claudio Fuentes-González is the Director of the School of Public Administration, and researcher at the Centre for Regional Studies, at the Universidad Austral de Chile, Valdivia.