The Chilean presidential runoff and the revival of the constitutional agenda 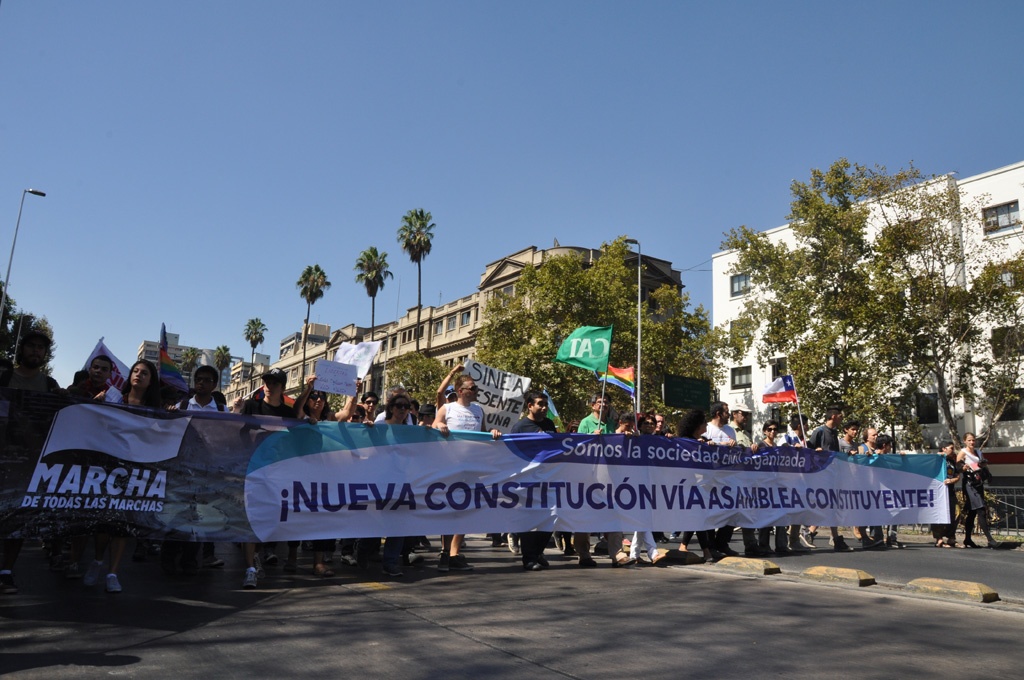 Despite initial indications that Chile’s constituent process was doomed to stall with the probable election of a right-wing government, the presidential and congressional elections of 19 November have challenged the dominant narratives. On Sunday 17 December 2017, Chile will face a presidential runoff with a revived constitutional agenda that is likely to stay for some time in Chilean politics – writes Alberto Coddou Mc Manus.

Three weeks ago, almost everyone thought that Sebastián Piñera, a right-wing billionaire, was going to win either in the first round, or in the presidential runoff to be held next Sunday (17 December 2017). Opinion polls gave him an overwhelming support, and some even anticipated that there might be no need for a second round. Somehow, many thought that the election was already decided, and that Chileans were leaning in favour of moderating the pace of the reforms promoted by the current socialist government, which involved regulations on access to the educational system, a tax reform, a qualified abortion law, and the creation of a new constitutional arrangement to replace Pinochet’s constitution. For several observers, the ‘sociological’ analysis was more or less clear: four years ago Chileans were willing to make structural reforms to the ‘model’ - that is, to the open endorsement of a free market system ‘with a human face’ that began with the return to democracy in the 1990s, which explained the victory of a socialist president. Nowadays, these analysts claim, Chileans think the government went too far, and that although they want more opportunities to flourish, they want to retain their freedom to choose between the private system and the state for access to basic goods. Moreover, and following an agenda-setting strategy of different media corporations, liberal think-thanks, and economists, this climate was amplified by the negative approval rates of president Bachelet and her cabinet, and an allegedly huge backlash against the reforms promoted by the government.

The lack of political support among both the official governing coalition and the right-wing opposition made the constitutional path harder.

In this scenario, the constituent process launched by the government during 2016 was doomed to fail. Although a consultation process gathered more than 200 000 people in several stages to discuss the contents of a new constitutional chart, the lack of political support among both the official governing coalition and the right-wing opposition made the constitutional path harder. Low rates of approvals, and the need to address the social and economic effects of the end of the ‘golden decade’ of commodities in the region pushed the government away from any big-scale project of reform without immediate impact on the population. Furthermore, the need to achieve super-majoritarian quorums (2/3rds or 3/5ths of each chamber of Congress) for any constitutional project to pass, frustrated any constitutional enthusiast. In the words of a former socialist senator, discussing a new constitution in these circumstances was like ‘smoking opium’.

After the 19 November 2017 vote, however, the panorama is now radically different. Unlike even the most negative predictions, Sebastián Piñera came in first place with a mere 36% of support. The biggest surprise, however, was the strong contest for the second place, which would determine the contender for the presidential runoff: while the candidate of the ruling coalition (Alejandro Guillier) achieved a poor 22%, Beatriz Sanchez, supported by a newly created leftist coalition (Broad Front), ended with 20% of the votes (a difference of approximately 150 000 votes). Furthermore, the parliamentary elections also went significantly against public expectations. The older binominal electoral system, which gave the two ruling coalitions an almost undisputed power to control access to parliamentary seats, was replaced by a new proportional system that gave more opportunities for smaller political platforms within an enlarged Congress. Although there was some uncertainty regarding the composition of the new Congress, nobody expected the achievements of the Broad Front, which elected 20 members in the Chamber of Deputies and one in the Senate.

The newly elected Congress is more attuned to Chilean society and has moved one step to the left.

In further surprises, several ‘old barons’ of different parties were not re-elected; a young movement of liberal right-wing leaders, who are attempting to replace the traditional right, increased their participation; a gender quota law enacted at the end of last year radically increased female presence, including an indigenous leader. From every point of view, this Congress is more attuned to Chilean society, and for different reasons, is a Congress that moved one step to the left. In this new scenario, the presidential runoff race has been slanted to address the issues raised by the Broad Front, such as an end to the pension system bequeathed by Pinochet, the scope of Bachelet’s commitments to a free and high quality education for all, and, more importantly, the prospects of a new constitution. Alejandro Guillier has now received different endorsements from the Broad Front, including many elected Congresspersons, and from Beatriz Sánchez herself. Within these exchanges, the constitutional agenda has acquired a new life, becoming a crucial bridge for left-of-center and far-left positions that may have different stances on several public policies.

The constitutional agenda now has different options for resurrection. There is a constitutional bill pending in Congress that would create a ‘Constitutional Convention’ that should decide on a constitutional draft to be presented by the government after next Sunday’s presidential runoff. Although the name ‘Constitutional Convention’ invites us to think of a mixed composition of elected representatives and citizens, the bill does not prejudge on this regard. Alejandro Guillier has said that this Convention must adopt the form of a Constituent Assembly (composed of citizens specially elected for the sole task of creating a new constitutional draft). However, the approval of this bill, and even the precise nature of the Convention, are subject to super-majority constitutional quorums, which curtails the chances for this project to succeed in this Congress given the likely opposition from the parties on the right. The Broad Front is now pressing Guillier’s support team to open discussion for an entry referendum, that is, an amendment that could allow the president to call for a referendum that can begin a constituent process without the constraint of current constitutional frameworks. Voices from the socialist and communist parties, and other militants on the left of the New Majority coalition are of the same opinion, but Alejandro Guillier still lacks a clear stance on the possibility of endorsing a ‘new constitution’ as a main banner of his campaign for next Sunday’s election.

Despite the reforms that have addressed some of the major constraints on democracy in the Chilean Constitution, there are still remnants that make structural reforms difficult.

Whatever results we may expect, and whatever the future of the constituent process initiated by the Bachelet government may be, the constitutional reform agenda is now here to stay for some time. With the new left in Congress, and with increasing demands for more egalitarian arrangements in the access to fundamental rights, constitutional issues will continue to arise every time the constitution acts as a blockade for what politics can do. Despite the reforms that have addressed some of the major constraints on democracy in the Chilean Constitution, there are still remnants that make structural reforms difficult, including the high threshold for the modification of ‘organic laws’, and the ‘preventive’ control of constitutionality by Chile’s Constitutional Court. During Bachelet’s term, every important reform was subject to review by the Constitutional Court, in some cases seriously curtailing the possibility of democratic deliberation in the Congress. If Guillier wins this Sunday, the constitutional arrangement will be in tension with a political manifesto committed to replace the constitution through a Constituent Assembly. To the contrary, if Sebastián Piñera gets the majority vote, he will have to lead a hyper-presidential system with a Congress that, although fragmented, has clearly moved to the left. In this context, disputes about the boundaries of powers between the Executive and the Congress are expected to grow, and with it the periodic revival of the constitutional agenda.

Alberto Coddou Mc Manus is a Chilean lawyer, and PhD candidate at University College of London. He teaches Constitutional Law at Universidad Diego Portales (Chile) and is Content and Consulting Co-ordinator at the Observatory of the Chilean Constituent Process.