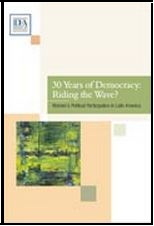 30 Years of Democracy: Riding the Wave? Women’s Political Participation in Latin America (by Beatriz Llanos and Kristen Sample) examines the progress made in women’s participation at all levels of public and party decision making, in the three decades since the start of the third wave of democratization in Latin America, drawing on data from 18 countries in the region.

The study goes beyond the numbers, analyzing why some countries have been able to advance further than others and identifying some of the continuing obstacles encountered by women. It presents recommendations for improving the situation of women in public life including:

You can read or download the full report in the link below: