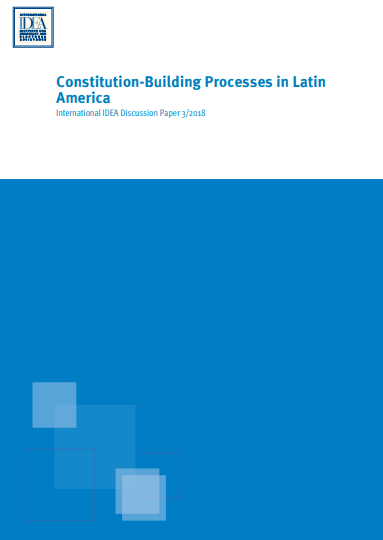 Constitution-building processes in Latin America from 1978-2012

This report seeks to describe and analyse key features of constitution-building and reform processes in 18 Latin American countries during the period 1978–2012.

Each of the four chapters, covering constitution-making procedures, executive powers, citizen rights and constitutional justice, and participatory institutions, was originally conceived as a discussion paper for participants in an international seminar held in October 2015 in Santiago de Chile, organized by the General Secretariat of the Presidency of Chile, International IDEA and the University of Chile Law School.

The chapters take a comparative approach to constitution-building experiences in Latin America, with the central objective of informing deliberations on the creation of a new constitution in Chile.

The Annex contains a concluding essay which builds on the topics discussed in this report to analyse the constituent process currently underway in Chile. The Chilean case serves as a reminder that constitution-building processes are deeply political affairs, in which correlations of power, strategic behaviour, and even sheer luck, play important roles.