Zimbabwe-Why the COPAC Constitution is here to stay 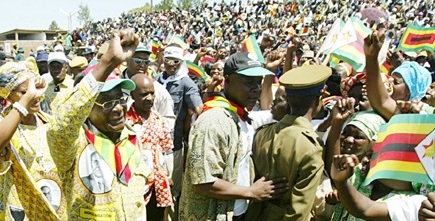 In March 2013, Zimbabweans voted in a referendum to overwhelmingly approve a constitution that they hoped would not only address the country’s protracted socio-economic and political challenges, but also stand the test of time. However, the dust had hardly settled on the Constitution before calls for its amendment surfaced, both from within and outside the ZANU-PF. As I have previously indicated in another piece on this forum, those pushing for this argue that the Constitution was a compromise document that left a lot to be desired.

There is no firm evidence, yet, of any broad support for this movement within ZANU-PF Politburo. Former Legal and Parliamentary Affairs Minister Patrick Chinamasa, a powerful figure within the ZANU-PF government, who is also currently Mugabe’s Finance Minister, has dismissed such calls. Second, President Mugabe himself remains silent on the subject and most of the cheerleaders—notably Jabulani Sibanda of the Zimbabwe National Liberation War Veterans Association and Bishop Trevor Manhanga of the Pentecostal Assembly of Zimbabwe – have quieted down since the elections.  Yet, anyone close to Zimbabwe knows that ZANU PF, should it be inclined to review the Constitution, lacks neither the means, motive nor the opportunity to do so.

Firstly, it is common knowledge in Zimbabwe, as I argue elsewhere, that this Constitution is not the one ZANU-PF would have written, despite their public acceptance of the document. If history provides any guidance, anything the party says about this Constitution must be taken cautiously. In 2000, for instance, it purportedly conceded defeat in a constitutional referendum vote seeking to nationalize commercial farms, only to later backpedal on this concession and to fast-track a land reform program. This attracted sanctions that are partly to blame for the country’s economic, if not political, challenges in recent times. For a largely conservative party, some of the clauses in this Constitution remain too progressive for its taste. The limits it places on executive power, for instance, is one reform ZANU-PF resisted and might want to revisit. The same applies to the exclusion of security forces—an openly partisan institution—from politics.

Secondly, the party has adopted a cavalier attitude towards constitutional implementation, being quick to implement provisions that serve their purpose, such as those related to elections, but slow to apply those that might work against them. This includes, for instance, clauses establishing the Constitutional Court —a critical institution for enhancing constitutional governance—which ZANU PF fought to ensure they will not come into operation at least before 2020. Others include clauses on the devolution of government. That the government did not even allocate resources for constitutional implementation in the 2014 budget is also worrying.

Thirdly, except for Chapter 4 (on the bill of rights) and Chapter 16 (dealing with land issues), which can only be amended via a referendum, ZANU-PF has the two-thirds majority in both Houses of Parliament necessary to legally dismantle this Constitution without any legal consequences. While this may not be a very legitimate move as it alienates the majority of Zimbabweans who approved this document via a public referendum, nothing in the Constitution prevents them from amending most of its provisions if they are so inclined.

Without doubt therefore, ZANU PF has the motive, means and opportunity to amend this Constitution if the hardliners in the party get their way. What, however, is the likelihood of this happening? Almost none. There are too many constraints, both internal and external that makes such a move unlikely and even ill-advised even if they were so inclined.

Firstly, there are likely to be political costs even if there are no legal ramifications. ZANU PF still sees itself as the leading political force in the country even after Mugabe—its epicenter—would have bowed out. Internally, such a move would alienate ZANU PF — currently the principal and most popular political organization in the country by all indications— driving voters to the MDC at the next election. On the other hand, Zimbabweans have demonstrated remarkable patience with the ZANU PF, even in the face of violence engineered by the party to achieve political objectives as in 2008. In fact, this culture of passive resignation has led many Zimbabweans to rule out the chances of any popular uprising in the country. Yet, can they always be expected to remain so passive? The 1997 uprising against the government—led by liberation war veterans, who ironically were also ZANU-PF affiliates—suggests the contrary.

Externally, ZANU-PF might also see itself losing a key ally in South Africa’s Jacob Zuma, who played a key role as mediator throughout most of the transitional and constitutional processes. He has often been accused of being too soft on Mugabe. Could Zuma’s patience also run out on Mugabe? There is no evidence of that happening yet. However, the South African President is facing enough political troubles of his own at home to rule this out. Since reports emerged that he used state funds to refurbish a fancy get away home in his village, the President has seen his popularity plummet and increasing calls for his resignation from as much as 51% of the ANC membership. Zuma’s departure will leave Mugabe in a risky position, since it is unclear whether his successor will be as sympathetic to ZANU PF or as tolerant if its attempts to change the Constitution. This exposes Mugabe to less indulgent compassionate countries in the SADC zone, such as Botswana, which has always preferred to see the bloc take a much tougher stance against Mugabe.

Outside SADC, there are likely to be repercussions from other international partners as well. Although relations with the West have thawed, not all the sanctions—which have been in force for years now— imposed by it have been lifted.  Travel restrictions are still in place, and donors and international financial institutions are still cautious in their approach to resuming budgetary support and opening credit lines—a real thorn in the relations between the West and the Zimbabwean government in recent years. Any regressive action—which amending the current Constitution might constitute— is likely to turn back the clock and damage Zimbabwe’s vigorous campaign to re-engage the international community. This could jeopardize support for ZIMASSET, the economic blueprint for the next five, for Zimbabwe it needs all the international partners it can get. Constitutional regression and international isolation would also hurt the economy, which appears to be recovering after years of bad performance related to sanctions. The ZANU-PF government has taken most of the credit, though some would argue unduly so, for the growth records of the last five years.  This has boosted its ratings amongst Zimbabweans putting; it in a much stronger political position than it has been in recent times. Would the ZANU-PF want to lose this political capital through a potentially unpopular constitutional amendment at this time?

Lastly, there is President Robert Mugabe—his private needs, wishes, and desires—which must be considered separately, as he slowly enters the twilight of his political carrier. Having just celebrated his 90th birthday, the President must be reflecting on his legacy. How can he regain and retain the legacy of an endeared liberation fighter, which he has largely lost due to his continued grip on power and mis-governance in recent years?  How would an amendment that would only be perceived as engineered to protect the interest of his successors help him leave a better legacy for himself? If we are right and the President is reflecting on these questions, it is unlikely he will approve such moves. Why would he want to tarnish efforts to rebuild his record just when this has begun to bear fruits? His popularity –both within and outside Zimbabwe—seems to be on the rise as seen in the huge applause he received from the public last December at Mandela’s funeral.

To conclude, while the ZANU PF has the means and opportunity, through its parliamentary majority, to reconfigure Zimbabwean politics for their benefit through reshaping the current constitutional framework, the political and economic fallout of that action provide too many constraints that militate against it.

Adem Abebe 23 August 2016
Hello there, glad you find the site useful. If you would like to receive regular updates on constitutional developments worldwide, please subscribe to our Newsletter here: http://www.constitutionnet.org/dashboard Best, The Editor