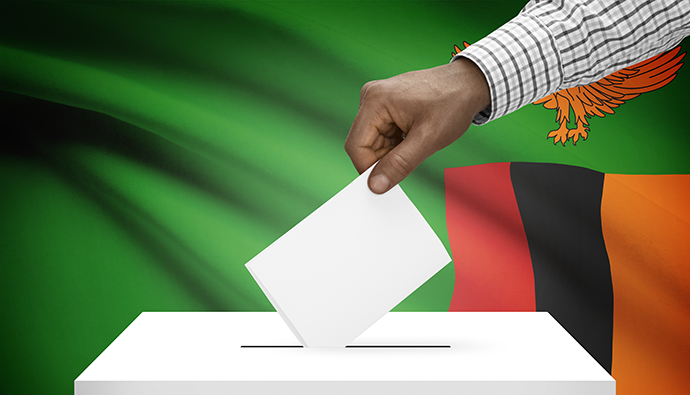 While the proposed amendments to the constitution will enhance the Zambian Bill of Rights and popular control of major future amendments, it cannot make up for the failure to effectively involve the people in and the questionable legitimacy of the drafting of the constitution. The combination of the referendum with regular elections has also undermined the informed debate and focus constitutional reforms warrant – writes Professor Lumina.

After a controversial drafting process and enactment of a constitution by the country’s Parliament, Zambians are set to adopt the final proposed amendments to the Constitution in a referendum to be held alongside the presidential, parliamentary and local government elections on 11 August 2016. The process leading up to the enactment of the Constitution by parliament late last year and the referendum question have evoked strong criticism from a broad range of actors, with many bemoaning the usefulness of the exercise in circumstances where there is little public understanding of the referendum question and process.

On 16 November 2011, President Michael Sata appointed a technical committee to draft a new ‘people-driven’ constitution for Zambia. The drafting process commenced in December 2011 and was completed in 2013. Nevertheless, in what is widely considered an attempt to manipulate the constitution-making process, the government did not release the initial draft constitution for more than a year. The draft was released on 23 October 2014 following sustained public pressure.

In mid-July 2015, following a compromise proposed by current President Edgar Lungu, the government controversially presented the draft prepared by the technical committee to Parliament for enactment of provisions that were considered non-contentious. These provisions formed the larger portion of the draft constitution and would, after enactment, become effective immediately. According to the Minister of Justice, Ngosa Simbyakula, the government decided to have the constitution adopted by Parliament as opposed to a referendum because the parliamentary process was more cost-effective.  The government also argued that it was not practical to submit a constitution consisting of 322 clauses to referendum and, in particular, that to ask ‘the voter to say either “yes” or “no” to a whole document when he/she may accept some clauses and reject others, places the voter in a serious dilemma’. Thus, a referendum on the whole document would not be ‘a true reflection of the will of the people’.

Nevertheless, under the Zambian Constitution, amendments to the Bill of Rights and Article 79 of the Constitution (‘the amendment clause’) require a referendum in which citizens either accept or reject the proposed change/s. Thus, Parliament could only approve changes other than those proposed to the Bill of Rights and the amendment clause. It was decided that changes to these entrenched provisions would be subject to a referendum to be held alongside the presidential, parliamentary and local government elections in August 2016.

During the parliamentary process to pass the Constitution Bill, however, the government controversially used its parliamentary majority and the support of some members of the opposition to reject some provisions contained in the draft constitution prepared by the technical committee following popular consultations. Notably, changes proposing a devolved system of governance through elected provincial assemblies, the mixed member representation electoral system, and the appointment of cabinet ministers from outside the National Assembly were rejected.  For many commentators, the parliamentary process fell far short of what was required to achieve a truly people-driven constitution and a new constitution that would reflect the wishes and aspirations of the Zambian people. Indeed, the notion of ‘a people-driven constitution’ implies that the people, not the government of the day, must play a dominant role in the process of drafting and adopting the constitution.

In December 2015, Parliament passed parts of the Constitution of Zambia (Amendment) Bill that did not require a constitutional referendum, which came into force on 5 January 2016, after President Edgar Lungu signed the new constitution into law.

The referendum to approve or reject the proposed changes to the Bill of Rights and amendment clause will be held on 11 August 2016, at the same time as the presidential, parliamentary and local government elections. In addition to the civil and political rights already provided for in the current Bill of Rights, the proposed Bill of Rights includes new rights such as the right of access to information, freedom of the media, freedom of movement (which includes the right to a passport), gender equality, right to procedurally fair administrative action and non-refoulement for asylum seekers and refugees. The exception to the prohibition on discrimination in the previous constitution relating to adoption, marriage, divorce, burial, inheritance, customary law or other matters of personal law, has been discarded in favour of an exception relating to affirmative action. The new Bill of Rights also provides for a number of non-derogable rights and freedoms, as well as a general limitation and derogation clause.

The proposed Bill of Rights also includes economic, social, cultural and environmental rights, as well as ‘further and special rights’. Among the economic, social and cultural rights are the rights to healthcare, decent housing, food of an acceptable standard, clean water, education, social protection, employment, consumer rights and a clean and healthy environment. The further and special rights include rights of older members of society, protections and rights relating to marriage and family, special rights for children, rights for youth, and rights for persons with disabilities.

Proposed changes to the constitutional amendment clause will enhance the role of the people in approving amendments concerning a range of issues. Under proposed articles 301 and 303, amendments to the supremacy clause of the constitution; the sovereignty and sovereign authority of the Republic; presidential and parliamentary electoral systems; tenure of office and vacancy in the office of President; election and swearing in of the vice president; appointments, roles and tenure of ministers and provincial ministers; as well as the amendment clauses and the Bill of Rights will require a referendum, and subsequent approval by the National Assembly. The proposed amendment clause is silent on the number of parliamentary votes. Under article 78 of the Constitution, in the absence of specific rules, the National Assembly decides by a majority of members present and voting. All other amendments that do not require a referendum must be approved by at least two-thirds of the members of parliament at the second and third readings.

While the old constitution provided for not less than 50% of those ‘entitled to be registered’ as voters for purposes of presidential and parliamentary elections, which has created uncertainties in determining the validity of referendum outcomes, the new amendment clause provides for a referendum threshold of 50% of ‘registered voters’ voting and more than 50% voting in favour. Article 303 requires that a bill to amend the Bill of Rights and the specified articles, and to repeal and replace the constitution, be published in the Gazette, tabled before the National Assembly for first reading within 30 days after such publication, and subsequently referred by the Speaker of the National Assembly to the Electoral Commission, which must then hold a referendum within 120 days after receipt of the bill.

The referendum question being put to the electorate is: ‘Do you agree to the amendment to the Constitution to enhance the Bill of Rights contained in part III of the Constitution of Zambia and to repeal and replace Article 79 of the Constitution of Zambia?’ In accordance with the Referendum Act, eligible voters are required to vote either ‘yes’ or ‘no’. In the event that more than 50% of the eligible voters approve the proposed changes, the amendments will be tabled before the National Assembly, which is obliged to pass and send them for presidential assent. This process suggests that the president may still withhold his or her assent to what has been approved in a referendum and refer the bill to the National Assembly for reconsideration, thus potentially undermining what is meant to be a ‘people-driven’ process. Nevertheless, where the National Assembly again passes the bill with or without amendment, the president must assent to it within seven days and if the president does not so assent, the bill is deemed to have been assented to upon the expiry of that period.

A number of interested stakeholders have raised concerns about the timing of the referendum and have called for the referendum to be deferred to a date after the general elections. In a press statement issued in July 2016, the Council of Churches in Zambia (CCZ) expressed concern over ‘the flawed processes leading to both the amendment of the national constitution and its assent’. The CCZ noted that the manner in which the referendum question had been formulated had ‘cast a cloud over the clarity of the intent’.

In July 2016, the Council of Elders of the Zambia Elections Information Centre expressed concern that there were still ‘a lot of misunderstandings’ on what the referendum entails and that some citizens appeared to confuse the referendum with partisan elections. It further expressed regret at the lack of voter education to sensitize citizens on their participation in the referendum and why they should vote for or against the referendum question. According to the Non-Governmental Organisations Coordinating Committee, the delay in releasing the proposed Bill of Rights was ‘a deliberate ploy to yet again deprive the people of Zambia an opportunity to have a people-driven Constitution that is reflective of the Zambian people’s will and aspirations’.

Neither the ruling party nor the opposition has attempted to sensitize voters on the implications of the referendum. Rather, they have used the referendum to boost their election campaigns. During the launch of the manifesto of his party (the Patriotic Front) on 21 May 2016, President Lungu indicated that he would vote ‘yes’ in the referendum and urged party members to do the same since the party had so decided. Conversely, the opposition United Party for National Development has urged its supporters to vote ‘no’ in the referendum because of the alleged manipulation of the constitutional making process by the ruling party through the rejection of certain clauses during the parliamentary process. It is also concerned about the timing of the referendum, which it argues is calculated to unduly influence voters to support the ruling party.

A further problem with holding the referendum alongside the general election is that the eligibility and voting criteria are different. While there is no minimum threshold for voting in the general election, the referendum requires that at least 50% of those entitled to register to vote participate and that more than 50% of these vote in favour of the referendum if it is to pass. The low voter turnout in previous elections, combined with the vote ‘no’ campaign of opposition parties, may threaten the approval of the amendments. It is unclear what will happen in the event that the proposed amendments are rejected in the referendum. According to the Electoral Commission, a ‘no’ vote will mean that the voters want the current Bill of Rights and Article 79 to remain unchanged.