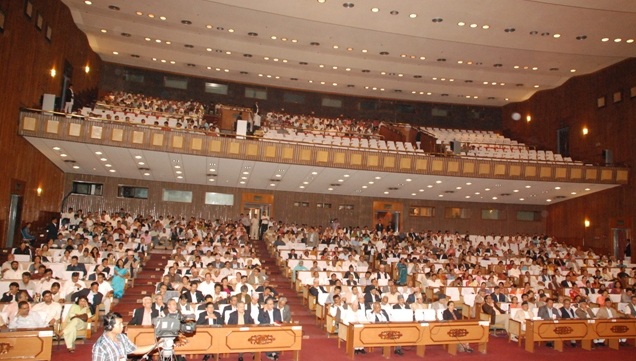 As 2014 unfolds, Nepalese citizens must be feeling very buoyed, if not for having seen another year, then at least by the mere fact of having a new Constituent Assembly (CA) which seems truly committed to finally  address the country’s constitutional impasse. In a move which, apparently, shows both recognition and a need to forestall the divisions responsible for shortcomings of the last CA, the major parties of the new body quickly reached a four-point deal on December 24 in which they agreed, inter alia, to: (1) establish a committee comprising of their top leaders to assist in finalizing what is left of the constitution drafting and peace process, (2) ensure the promulgation of the Constitution within a year. Such initiatives certainly bring fresh hopes that the much-awaited Constitution may not be that elusive after all. Yet, with so many issues still lingering, can it be that easy?

For a start, the December Agreement certainly indicates a will amongst the major parties to cooperate, but the degree to which they can do so is also dependent on their ability to respond flexibly to a number of key substantive questions that bedeviled the last CA. Federalism, for instance, remains one critical issue. As argued here, if the public positions of the key parties are anything to go by, then one should not expect any change of tone over this issue. The UCPN (Maoist), along with Madhesi and ethnic-based parties, still maintain their stance on identity-based federalism. For their part, the NC and the UML (together with other smaller parties) are still in favour of territorial federalism and fewer federal units.

On the system of government—another thorny issue—the positions are also different. The NC’s stance is still for a traditional Westminster parliamentary system. The UCPN (Maoist) wants a directly elected president with full executive powers to be shared with a PM elected by Parliament. The UML proposes a novel arrangement whereby executive power would be shared between a directly elected PM and a President chosen by Parliament. An informal understanding amongst all three parties for a semi presidential system is in place, but given the unpredictability of the political party landscape, can they be trusted to take this through?  Also, given the differences on key issues of constitutional significance, how easy will it be to get the numbers necessary to reach agreement on these issues?

Unlike in the old CA, where the lack of a clear majority meant that the choice was always between compromise or nothing, there is a radical shift in the political configuration of the new CA that makes it easier to push things through in case of deadlocked negotiations. The NC and the UML (both leading parties in the new CA with 196 and 175 seats respectively) may, with the support of a few fringe parties, muster the 2/3 majority necessary to pass the Constitution, without the need to compromise with the UCPN (Maoist). However, UCPN (Maoist) - which lost its leadership position, having won just 80 seats in the elections - still commands a sizeable following; as it remains the third largest party in the new CA, the other parties would be ill-advised to completely ignore its views.

Almost two months after the elections, serious talks on the formation of a new government are yet to start. The NC and the UML, while both being the two largest parties in the CA, each lack the necessary numbers to form a government without forming a coalition with each other or reaching out to other parties. These include not only the UCPN, but also the Hindu monarchist Rastriya Prajatantra Party-Nepal (RPP-N) which, with 24 seats, is today the fourth largest party in the new Assembly. But will these two be receptive? The signals from the UCPN (Maoist) and the RPP-N seem to suggest the opposite, with the latter clearly stating that the decision of the people was for them to stay in the opposition. In current circumstances, formation of a stable government including all the three largest parties, let alone a government of national consensus, is highly unlikely.

The only plausible scenario for the formation of a stable government seems to be an NC-UML coalition, but differences between the two parties over the terms of the incumbent President and Vice President may get in the way. Whereas the NC wants to continue with the incumbent President and Vice-President until the promulgation of new constitution, UML wants fresh elections for those positions so as to share the top five posts of President, Vice-President, Prime Minister, CA Chair and Constitutional Committee Chair among major political parties as in the past. RPP-N supports UML in this demand whereas UCPN (Maoist) has not given its official stance on the issue. Should talks with the UML fail, the NC might reach out to other smaller and numerically weaker parties like the Madhesi parties who have a history of joining different governments. Giving this reality and the history of unstable governments in Nepali politics, this new Assembly, like its predecessor, risks facing a situation where constitution drafting takes a back seat or is stalled as stakeholders try to build workable coalitions.

Unlike the first CA, which was widely applauded for its inclusiveness and representativeness, a preliminary analysis of the membership of the current body suggests that the representation of minority and marginalized groups has dropped. For instance, representation of women is only about 30%, indigenous peoples 31%, Madhesi 26% and Dalits 7% (all down from their respective representation of 33%, 37%, 35% and 8% in the previous Assembly). With weaker representation and participation, it is unlikely that issues affecting these groups will receive due attention in the new CA. Added to this is the fact that a number of parties (the so called 33-party bloc, headed by the CPN-Maoist - the splinter group from the UCPN (Maoist) which boycotted the election) have called for the new CA to be replaced with an all–party roundtable conference to agree on the core contents of new constitution. This bloc has agreed not to be part of processes under the new CA, concluding that the latter cannot promulgate a “people’s federal democratic constitution”. Whether justified or not, this reality—and which Nepal’s two key neighbors China and India have also pointed out—is already a red flag to tensions and problems that could lie ahead if buy-in is missing from all segments of society.

With legacies of past conflict far from being completely addressed, renewed violence, and even, worse communal violence—the risk of which is real as some small identity-federalist parties call for street demonstrations—is the worst thing that could happen to the country and this constitutional process.

Clearly, while we have a new year and a new CA, the journey to a new constitution can hardly be expected to be smooth when all these issues are considered. So what scenarios are likely to play out in the near future?  Although efforts will almost certainly made to form an inclusive and broad-based government with all parties, the most likely scenario, as hinted at earlier, will be a predominantly NC-UML coalition. After all, they are more aligned with each other on many of the key sticky issues such as federalism, system of government and electoral system. Even so, it will not be that easy, and might result in long negotiations due to the personal ambitions of their two leaders.

Should rumors of the UCPN (Maoist) shift of positions turn out to be false, federalism is likely to remain the stickiest of all the issues. Alliances are again likely to be formed on this subject. Already, parties favoring identity-based federalism are making efforts towards this goal through the formation of non-partisan caucuses. Be this as it may, much of what will happen –as the CA gets down to business—will only be seen in the weeks and months ahead.

[1] Prabindra Shakya is associated with different NGOs in Nepal for research and advocacy on peacebuilding and human rights.