Will Nepal finally break the cycle of constitutional paralysis and hold local elections? 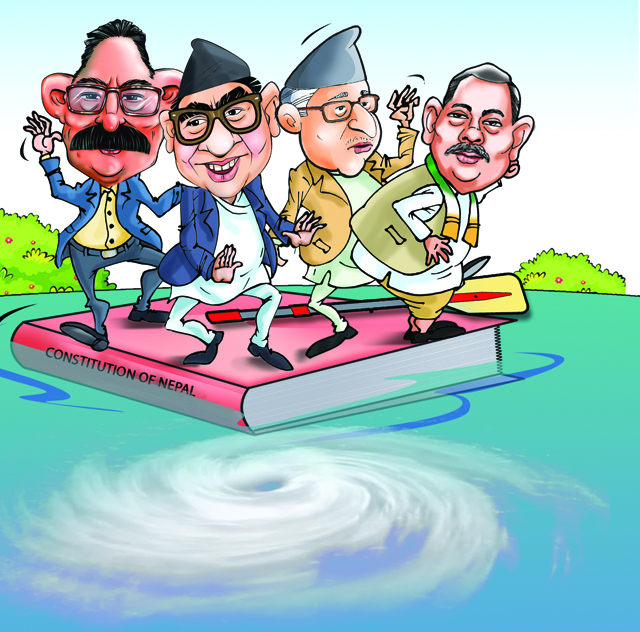 Political belligerence has hampered Nepal’s constitutional transition to federalism. The survival of the constitutional project requires the atonement of raw political positioning on the part of the main opposition party and the acceptance of incremental changes by the agitating Madhes-based parties and Federal Alliance – writes Prabindra Shakya.

With less than two weeks remaining for Nepal’s first local elections in two decades, the country is facing another crisis due to unresolved grievances, mainly relating to federalization, in the Constitution promulgated in 2015.

On 24 April 2017, the Government of Nepal presented a revised bill to amend the Constitution in the Parliament as part of a breakthrough deal with the Federal Alliance, a grouping of Madhes-based and other smaller parties. Those parties have long been demanding changes in the Constitution, which has lately narrowed down to a re-delineation of provincial boundaries, among others. The new bill seeks to address those demands, at least to the procedural extent, in order to bring the parties to the electoral process.

The revised bill comes after the earlier amendment proposal drew criticism from a coalition of opposition parties led by CPN-UML as well as the Federal Alliance, whose concerns the bill sought to address. While the UML-led opposition coalition objected to any change to current provincial boundaries (or to the Constitution as such), the proposal had also failed to garner support from the Federal Alliance, which stuck to its maximalist position seeking immediate changes in the provincial boundaries as per their demands.

The latest deal has provided renewed hopes for holding the local elections across the country. However, there are already signs that it might fall through any time if the UML sticks to its gun against any amendment to the Constitution and the Federal Alliance fails to accept the need to make incremental changes. In the midst of a shaky power sharing arrangement and constitutional deadlines, failure to make an immediate political settlement might lead to severe challenges to the Constitution and the country.

What is new in the revised amendment?

The Government, as per the revised bill, will list all the native and official languages of Nepal in schedules of the Constitution to pave way for the adoption of a multilingual policy as recommended by a Language Commission. Similarly, the bill proposes that foreign women married to Nepali men can obtain naturalized ‘marital’ citizenship after initiating the process to renounce their original citizenship. It is unclear how naturalized marital citizenship is different from naturalized citizenship if at all. These proposals are more or less similar to those in the earlier amendment bill.

Nonetheless, the new bill makes stark changes in the formation of the National Assembly (second house) of the bicameral Federal Parliament. The amendment would remove chairpersons and vice-chairperson of village councils and mayors and deputy mayors of municipal councils from the Electoral College that elects members of the National Assembly, which will now only comprise of members of each Provincial Assembly. This is in line with the demands of the Federal Alliance to bring local units under provincial authority.

Finally, the bill proposes the formation of a Federal Commission to recommend on matters of number and re-delineation of provincial boundaries. The Government will determine the mandate and procedures of the Commission when it is formed. The Commission is now included under the ‘Miscellaneous’ chapter of the Constitution, which would mean that it will not be a transitional or short-term body as per the existing provisions. Thus, the Federal Commission is now separated from the Commission tasked with determining the boundaries of village councils, municipal councils, and special, protected, or autonomous regions.

The recent agreement between the governing coalition and the Federal Alliance has paved the way for the nation-wide local elections in two phases after the constitution amendment. Following the deal, the Alliance has called off its earlier plans to boycott and thwart the elections. The plans could have at least severely impacted Province 2, which is the stronghold of Madhes-based parties. The Government has decided to fast track the amendment process, and also to increase the number of local units in some districts in the southern plains based on population size as agreed with the Alliance. The first phase of local elections has been scheduled for 14 May in Provinces 3, 4 and 6 and the second phase on 14 June in the remaining four provinces.

However, it is not yet a done deal. The UML-led opposition alliance has decided against the endorsement of the amendment bill. UML Chair KP Oli, with his ultra-nationalist and polarizing stand, has alleged that the amendment proposal is anti-national and would push the country towards disintegration between southern plains and northern hilly regions of the country. He has also rebuffed the possibility of recognizing any languages other than Nepali as a national language, claiming the provision on language in the amendment bill was a plot to make Hindi (India’s official language) a national language. The party has also argued that the amendment proposal provides for undercutting the authority of local units (vis-à-vis the provinces) in the constitution of the National Assembly and allows arbitrary changes to provincial boundaries.

Without the support of the third largest party with 181 seats in the Parliament and/or the fringe parties in its coalition, it is going to be tricky for the ruling coalition to get the required two-thirds majority for the approval of the amendment. While some of the fringe opposition parties are already changing sides, there is increasing pressure on the UML that their arguments against the amendment are not based on any sound logic and they should agree to the larger political compromise for making the elections possible. However, there is always the risk that the party might just resort to politics of obstruction and boycott, a common occurrence in Nepal, to meet its aims.

Already, the UML’s obstructions of the Parliament against the Government’s circular sent to the southern districts to revise the number of local units have forced it to withdraw its action. The Government, however, reaffirmed to the Madhes-based parties of its decision to add local units in southern districts with the clarification that the increase will be made through consensus among parties at the national level.

Further, besides calling for withdrawal of the amendment bill, the UML has decided to oppose holding local polls in two phases and the announcement of the fiscal budget before the polls, which is constitutionally required to take place on 29 May. The party claims that organizing polls in two phases and budget announcement before or between the polls could influence the votes. As a result, the Election Commission has advised the Government to present the budget after the elections, which has initiated discussions on postponing the budget as well as vote counting arrangements for two-phase polls.

Thus, while the UML stands its ground to oppose every move of the Government, it does not portend well to bring the agitating parties in the election process.

Uncertainties and risks lying ahead

On 30 April, the ruling coalition failed in its bid to get the amendment bill endorsed after lawmakers from the ruling parties skipped the Parliament meeting despite efforts of their parties’ whips. When the coalition could not ensure the required two-thirds majority, the Parliament was deferred until 4 May without discussing the bill. Earlier, a total of 50 proposals were registered on the amendment bill from the ruling and opposition coalitions/parties, including 34 from the UML alone. The opposition proposals are for continuing the existing constitutional provisions.

However, despite the failure to get the amendment bill endorsed, the ruling coalition leaders have stated that the elections would go ahead as planned with participation of the Madhes-based parties, which seems unlikely. Rastriya Janata Party, Nepal – the fifth largest party in Parliament – recently formed after merger of six Madhes-based parties has already announced that it will not take part in the first phase of the polls. That might not be seriously and immediately concerning given that the electoral base of the party is in the southern plains, where the polls will be held in the second phase. However, if the revised constitution amendment does not move forward, the second phase elections is doubtful, particularly in some parts of southern plains, although other parties of the Federal Alliance are participating even in the first phase of the polls.

In the meantime, the surprising impeachment motion against the Chief Justice the ruling parties, Nepali Congress and Maoist-Center, filed on 30 April, added another layer of doubt over the elections. The impeachment motion lists interference of judiciary in executive decision making and working against the principle of separation of powers. After the impeachment motion, the third largest party in the coalition, Rastriya Prajatantra Party, Nepal, pulled out of the Government, although it has committed to support the election and the constitution amendment.

With the gentlemen’s agreement between the two ruling parties, the Maoist-Center has been under immense pressure to hold the local elections immediately before it is expected to make way for the Nepali Congress to hold provincial and federal elections by the constitutional deadline of January 2018. So, the impeachment motion was necessary for the ruling parties to proceed with the elections, the first phase of which seems to be right on track now.

However, if the ruling coalition cannot make an immediate political settlement with the UML, the country might be heading toward another risky confrontation for the second phase elections, particularly in the south, even though the first phase of the elections might go as planned. That can lead to the return of political violence as witnessed during the promulgation of the Constitution. That might be accompanied by the rise of extremist forces and the possibility of external (read: India) interference, and ultimately to the eventual collapse of the Constitution.

Prabindra Shakya is the Founder Chair of Community Empowerment and Social Justice Foundation (CEmSoJ) and engaged in research and advocacy on peacebuilding and human rights, with particular focus on indigenous peoples and minorities.