Why Nepal might not have a constitution on 22 January 2015 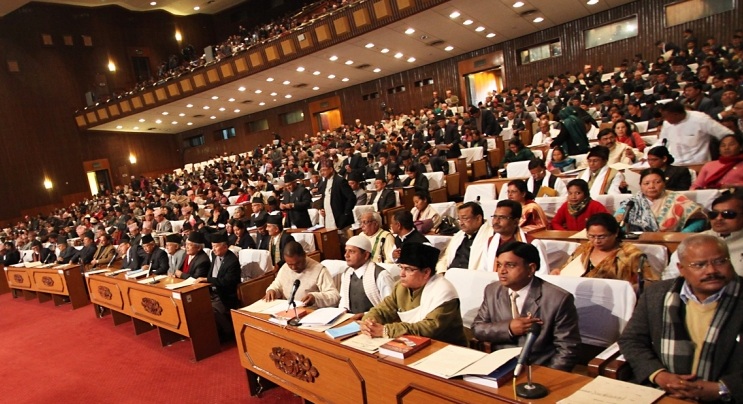 Nepal law makers in session: will they deliver?

In November 2013, Nepal elected its second Constituent Assembly (CA) to write a new constitution, a task left uncompleted by the first CA (2008-2012). The new calendar for the constitution making process set 22 January 2015 as the deadline for promulgating the Constitution. As 2014 draws to a close and the January 2015 deadline approaches however, there are emerging concerns about whether Nepal will indeed get its long -awaited Constitution in four months.

One concerning political development is the United Communist Party of Nepal -UCPN (Maoist) leader’s recent public declaration, in the context of  debates with other party leaders on the amendability of the constitution making work-plan, that “ the sky will not fall in case of amending the calendar of operation of Constituent Assembly.”

Clearly the 22 January deadline seems to have become a subject of negotiation, or even worse a bargaining chip for some stakeholders. In order to get them to reaffirm their commitment to the January deadline, the Nepali Congress (NC) -led ruling Coalition, in a quid pro quo, has had to reluctantly acquiesce to demands of the UCPN (Maoist)-led Opposition to extend the mandate of the Constitutional-Political Dialogue and Consensus Committee (CPDCC), which should have ended on September 6. This Committee is one of the five committees of the CA charged with forging consensus on contentious issues of the envisaged constitution which include issues relating to the federal design, form of government, electoral system and the design of the judiciary. It consists of 73 members from all 31 parties of the CA with the ruling parties being in the minority.

All contentious issues have been tabled for discussion by the CPDCC yet most of them remain unresolved, making the demand for an extension sound logical. However, it also seems to be a strategic tactic to serve the Opposition’s increasing interest of prolonging the constitution making process—an outcome, which for reasons shown later,  is likely to see the dissolution of the current ruling coalition and open the door for new alliances from which it stands to benefit most.

Another emerging issue is the decision making modality within the CA, which seems to have taken priority over substantive issues. The rules provide that all decisions be taken by consensus or by vote, with the former to take priority over the latter. The parties of the ruling coalition prefer all decisions to be taken in the plenary of the CA by voting whereas the Opposition prefers the consensus approach. Both parties are aware of the difficulties of reaching consensus in Nepal’s particularly polarized political landscape but the Opposition, in particular, are aware of the greater costs of shifting the battle field from the CPDCC to the CA plenary where they lack the numbers to win a vote.

In this regard, it is important to recall that the November elections saw the UCPN (Maoist) winning only 80 seats, down from 238 in the previous CA where it was the largest party. Its strongest allies, the Madhesh-based regional parties, also saw their seats fall from 88 to 50. By contrast, the NC- UML coalition made major gains in the CA elections, becoming the first and second largest parties respectively with a combined allocation of 388 seats. Their alliance with the Rashtriya Prajatantra Party (RPP) and Communist Party of Nepal, Marxist-Leninist (ML) gave them a total of 407 seats, slightly more than the two-thirds majority of 601 total CA members that is needed to pass the new constitution, should consensus fail.

Yet there are extremist forces both within and outside the CA with the potential to derail the constitution making process. A case in point is the RPP (Nepal), an extremely monarchist advocating not only for the restoration of the monarchy but also the re-establishment of the Hindu state as well as the creation of a unitary system. There is also the Janajati (indigenous peoples) or ethnic-based parties with about 15 seats in total as well as  the CPN-Maoist and other 33 small parties which boycotted the November 2013 CA elections. While not necessarily extremists, these parties may be used as bargaining chip by either of the two dominant coalitions, most likely by the UCPN (Maoist)-Madheshi coalition, in its tactical game of prolonging the constitution making.

At the moment, however, the NC-UML coalition has everything going for them. The UCPN (Maoist) has toned down its radical position on federalism and inclusion. Intensification of factional conflicts within the party – one led by Prachanda and another by Baburam Bhattarai – has negatively impacted its capacity to influence the constitution making process. The Madheshi parties have still not recovered from their defeat in the November elections which has bred internal splits in the party. Janajati activism has also considerably slowed. A shift in the priorities of the international community, from inclusion to stability, is also a gain for the moderate forces.  At the same time, it is important not to underestimate the scale of damage the UCPN (Maoist) and Madhesh based parties can do to this process despite lacking the numbers in the CA.

The NC-UML coalition has the numbers but are wary of getting into a confrontation with the Opposition for fear provoking a walk- out by a group that is, after all, at the head of the second largest political bloc in the country. Inclusion, at the end of the day, is still a key objective for all stakeholders regardless of the numbers. The UCPN (Maoist) has been clear about the need for buy-in at all costs.

Such statements, coming from the head of the UCPN (Maoist) suggests they are unlikely to allow themselves to be walked over.

Presently, the UCPN (Maoist) is building alliances both within an outside the CA to counter the dominant position of the NC-UML Coalition. Outside the CA, it has sought out splinter Maoist groups. Under the guise of broadening legitimacy of the new constitution, it tried bring the CPN-Maoist into the process by calling for a national political conference. Considering that the CPN-Maoist, which led a coalition of 33 parties to boycott the November elections,  have hardly shown interest in being part of the process, this seems like nothing more than a ruse to delay or sabotage the process. Within the CA, it has formed an alliance with pro identity-based federalism parties— mainly the Madhesh and ethnic-based parties— called the Federal Republic Alliance (FRA). Arguing that the ruling parties refused to respect an earlier agreement to form a High Level Political Mechanism, it is now using the FRA as a vehicle for obstructing the business of parliament, in addition to its demands to extend the life of the PCDCC.

Another cause concern for regarding the 22 January deadline is directly connected to the future of the present ruling coalition. Following a deal made between NC and UML in February 2014, the NC has to hand over the leadership of the government to the UML in January 2015. The condition associated for such a handover is finalization of the new constitution. So from the UML perspective, there is every interest in having a constitution on 22 January 2015, even if only for this reason alone.

One thing, however, is certain: the failure to produce a Constitution by January 22 will destroy any UML claim to lead the government, resulting in a possible breakdown of the Coalition. This will open the possibility for new alliances to be created. It is not unlikely that this is the calculation of the UCPN (Maoist) as they stand to benefit most from such an outcome. As mentioned earlier, it would both open up chances for them to re-enter the government and strengthen their bargaining position on the contentious issues of the Constitution.

As a solution to the deadlock over the amendability of the constitution making agenda continue to look elusive, it will also not be surprising if both the NC and the UML are drawing up contingency plans if this drags on beyond 22 January— something which at this stage cannot be completely ruled out despite all the talk from the politicians.