What do the people want? Demands for expansion of rights and a Christian state through constitutional reform in Liberia 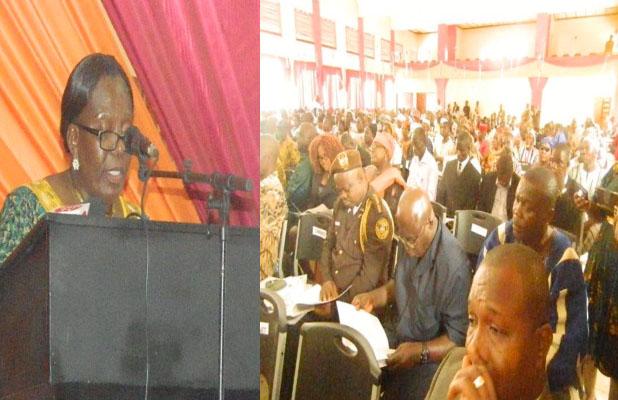 The most comprehensive review of the 1986 Constitution of Liberia is coming close to its final stage with the completion of the Constitutional Conference in Gbarnga, where delegates from across the country reviewed and voted on issues to be addressed through constitutional reform. Since the promulgation of the 1986 Constitution, the Gbarnga Conference and the extensive consultation process leading to it have formed the most comprehensive public debate on the Constitution. For the first time, Liberians have engaged on the constitution from all walks of life. Even though the Conference had no legal authority to make binding decisions on the constitution, it engaged a mosaic of Liberians from different regions and sectors.

What Do the People Want?

The Conference was convened to endorse the amendment proposals prepared by the Constitution Review Committee (CRC) on the basis of over 100,000 views collected through public discussions across the country and with diaspora Liberians between 2012 and 2014. Yet, the delegates rejected the nine-point CRC proposal on the amendments and insisted on expanding the agenda to include all issues deemed critical over the years of nationwide consultation.

Finally, 25 ‘recurrent issues’ were debated and voted on by over 400 delegates representing the 73 electoral districts, civil society and interest groups, religious groups, local chiefs and political parties. All proposals to amend the citizenship provision were rejected, including the removal of the Negro Clause and the introduction of dual citizenship. However, the delegates unanimously endorsed all provisions on the expansion of political and socio-economic rights as well as the controversial proposal on declaring Liberia to be a ‘Christian State’ - a decision that has overshadowed all other issues since the end of the Constitutional Conference.

Expansion of political and socio-economic rights

Liberia is classified as a ‘least developed country’ and its people are among the world’s poorest according to the 2014 Human Development Report. Many trace the source of the country’s long civil war (1989-2003) to poverty, corruption and an overall lack of good governance. Thus, since the end of the civil war, local civil society actors and Liberia’s international partners have demanded the adoption of laws and institutions that would broaden the political space for citizen participation. The country’s 2009 Truth and Reconciliation Commission’s report also recommended constitutional and legal reforms towards similar ends that Liberians have reaffirmed throughout the ongoing constitutional review process.

Economic and political rights must move in tandem to foster social development. Liberians rightly demand more economic opportunities, in particular sharing dividends from natural resources. Local communities live in desperate poverty in rural areas, where multinational companies continue extracting their resources. People have long remained without any direct benefit from natural resource investments – mining, forestry, and plantation - on their land. Liberian civil society campaigners, with the backing of international rights groups, have campaigned against the government contracts that allowed for the unjust status quo to prevail. The issue featured highly at the Constitutional Conference and was overwhelmingly endorsed by delegates in the hope that communities will be able to access resources to improve their economic and social well-being.

The rights of minorities and marginalized groups have also received wide support at the Conference, with a focus on the protection of people with disabilities against discrimination in employment and access to social services. Women groups have held discussions and developed common positions before the Gbarnga conference, where they demanded a ‘gender-responsive constitution’. They were seeking not only the coveted quota system for equitable representation in the legislative but also the expansion of property rights and protection of women under both statutory and customary marriage arrangements.

The Proposal for a ‘Christian State’

The proposal to declare Liberia to be a Christian State was adopted without anyone, including the Constitution Review Committee, having come forth with a clear explanation on its meaning. This initiative was not even part of the originally proposed nine amendments but has become the most salient point of the ‘25 recurrent views’. Proponents argue that Liberia should return to its ‘Christian heritage’. However, since its establishment, both Liberian constitutions have been clear on separating religion from the state and have proclaimed religious freedom as a fundamental right of all citizens. Article I. Section 3 of the 1847 Constitution even specified that “no sect of Christians shall have exclusive privileges or preference, over any other sect; but all shall be alike tolerated; and no religious test whatever shall be required as a qualification for civil office or the exercise of any civil right.”

Many believe that declaring Liberia to be a Christian state would ‘save’ them. They see the country’s problems as punishment from God for removing the word Christian from the Constitution during the 1981-1985 drafting process of the current constitution. Nevertheless, that process produced a democratic and rights-based constitution, which in article 14 guarantees religious freedom and reaffirms that “[n]o religious denomination or sect shall have any exclusive privilege or preference over any other, but all shall be treated alike; ...  Consistent with the principle of separation of religion and state, the Republic shall establish no state religion.”

Muslims and even Christians from orthodox churches have firmly supported the provision on religious freedom and some prominent prelates have condemned the process in Gbarnga arguing that there is no need for a legislation to practice one’s religion. Muslim delegates at the Constitutional Conference challenged the proposal and boycotted the vote. Following the Conference, the National Muslim Students Association pledged to petition the courts and the legislature to ensure that the ‘Christian state’ proposal is defeated. Claiming “Christian extremism”, they even threatened with possibly seceding Muslim dominant territories, if a Christian state is imposed.

Liberia’s last census from 2008 puts Christians and Muslims at 85% and 12% of the population respectively. Over the years, the communities have formed a bond of harmony and even inter-marriages have taken place among followers of the two religions.  The 2013 US State Department report hailed the country for high religious freedom and tolerance supported by its laws and policies. If the 416-16 vote in favour of a Christian state during the Gbarnga Conference is anything to go by, both religious freedom and peaceful relations between religious groups might be at stake, if the proposal is put on a nation-wide referendum.  Many Liberians have already labeled it as a recipe for chaos and division among Liberians, who have lived peacefully with much diversity so far.

Beyond the National Conference: What’s the fate of the proposals?

Some of the issues on the Conference agenda could be addressed through policy-making. Delegates voted on as technical issues as the currency regime of the country with little understanding of the relevance of the subject matter. As the CRC itself did very little to clarify the issues, it’s clear how the Conference nearly ended in chaos and why many Liberians have begun to question the credibility of the CRC in recent days.

Nonetheless, the National Conference was not a final instance to decide on what goes to referendum. It was a conclusion of public consultations to make sure the CRC duly considers the aspirations of the Liberian people. “Going forward, the collected ‘recurrent views’ could be forwarded to the government for constitutional, public policy or legislative reform” according to a CRC member. Thus it is too early to tell which issues are going to make it to a referendum. With the conclusion of the public consultations, the CRC is now synchronizing the issues and will file a report to the President, who will decide on what goes to the Legislature. Legislative proposals will only reach a referendum if two-thirds of both Houses adopt them after debate.

What this process has shown is that Liberians have greater aspirations, which they think the state has not been able to address over time. The calls for more economic opportunities and expansion of socio-economic and political rights - including political participation, inclusion of minorities and marginalized groups and land ownership - all demonstrate the massive dissatisfaction with the state and the Liberian government in particular. Even after ten years, Liberians are still clamoring favorable climate for economic participation. It is thus imperative that even in the absence of constitutional reform, the government begins to address the most burning issues. Governance and legislative reform, the establishment of independent institutions and enhanced state-civil society cooperation are doable policy initiatives critical to promoting the socio-economic empowerment of the people and the political legitimacy of the state, as Liberians await the deciding moment on the constitution.

Anonymous 1 May 2015
Hey comrade, this is the first piece of analysis on this Gbarnga conference from a person of different faith not written with emotions but ideas supported by references. This is an indication of a tolerable liberated mind. This is a fair analysis.
Anonymous 1 May 2015
If the issue of Christianization continues to surface on the agenda of the Constitution Review Committee than the entire process is a waist. Because it will sound like the committee's main aim was to Christianize Liberia, which has the portential to bring war again in Liberia. We all know that, because we saw what happen when this issue came up for the first time. The lawmakers were the one that resolved it with the hope that it will not happen again. Christianizing Liberia can not save Liberia but only divide Liberia because it will undermine the civil right of other Liberians, who joined other religions and you cannot force everybody to be Christian. Christianizing Liberia is just nonsense, not because I am a Muslim but it has no logical base. During 1990 when the rebels were killing Muslims, and those guys were Christians but when the Muslim fighters came back, they did not kill people because they were Christian but Christians kill people because they were Muslims. Therefore, my request to the Christianizing Machine (CRC) is to be careful because they are the one that working with Rep.Gabriel Nyenka,Sen.Jewel H.Taylor and other destrctive elements to create chaos by christianizing Liberia.
Anonymous 1 May 2015
Political Centralization, social discrimination and total marginalisation are the main problems in Liberia. The ended constitution review only meant to centralize power, marginalise and discriminate the minority groups in the country. We need to seriously focus on those issues.
Anonymous 1 May 2015
My thank and appreciation goes to each and everyone who made it to this wonderful conference. However it is important to note that by virtue of tangible history the Muslims in Liberia have demonstrated high level consideration by opening their hands to religious tolerance you and I know with no doubt that christianity is an alian and a strange doctrine in west Africa especially Liberia to be definite in my view. Christianity has been brought to us by the free slaves who was brought back by USA at which time the native of the mother was already Muslims while others were also practicing African traditional belief and so much more. Please brother Christian stop stepping on ours toes we have had enough pain and yet still you continuous to aggrevate our injuries that is already hurting us. please, please, again please stop and remember the Christians are the minimum minority on west coast of Africa to be specific. Mohammed Kromah