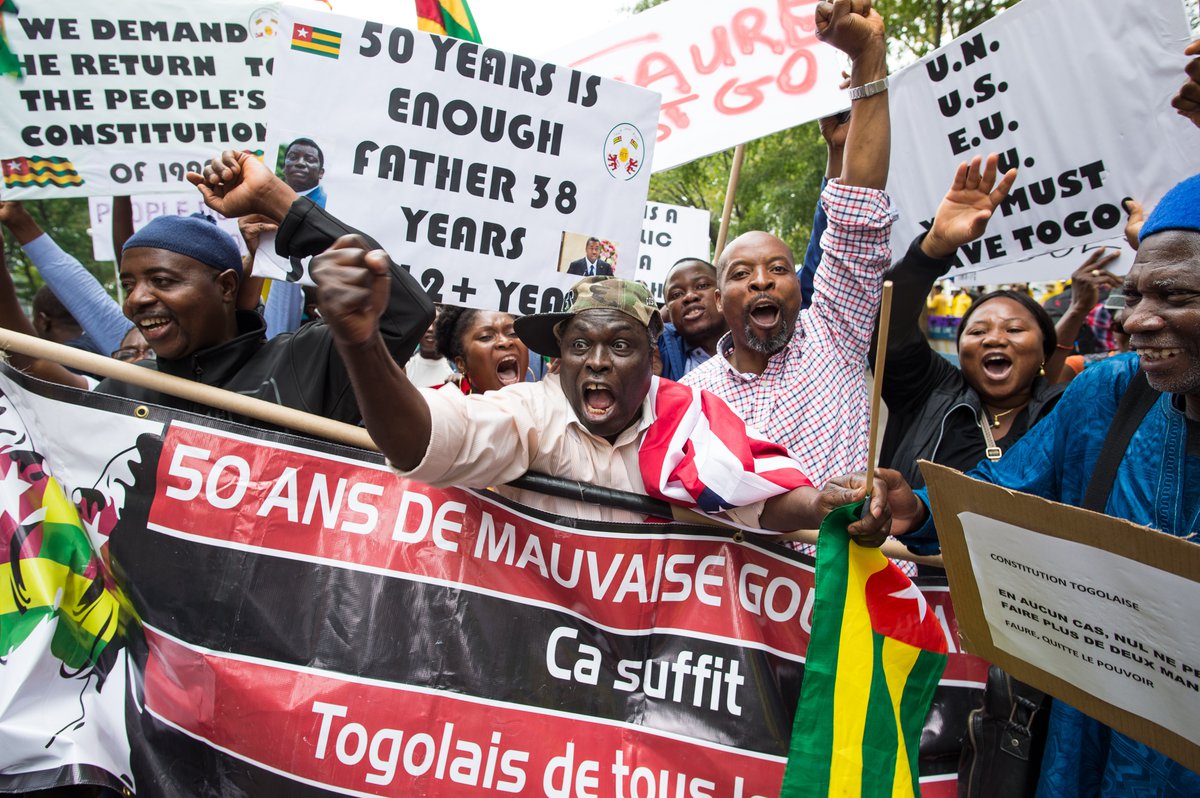 The outcomes of the December 2018 legislative elections allow the ruling party to push through ostensible constitutional reforms enabling the extension of President Faure Gnassingbé’s rule, without the concurrence of the people or opposition groups. The unilateral adoption of constitutional reforms, with implicit support from ECOWAS, would not solve the underlying divisions that underlie the Togolese crisis, and may exacerbate them – writes Dr Bado.

Togo’s referendum on constitutional amendments, planned for 16 December 2018, has been postponed. The referendum was intended to be held alongside legislative elections, which were initially planned for July 2018 but were postponed under pressure from the Economic Community of West African States (ECOWAS), to enable dialogue with opposition groups and implementation of needed reforms. The proposed constitutional reforms would have reinstated the two term limits on the presidency and the two-round majority run off electoral system for presidential elections, both abolished through amendments to Togo’s 1992 Constitution. Nevertheless, the term limits would only have applied prospectively, therefore enabling current President Faure Gnassingbé, who replaced his late father in 2005 and is already serving his third term, to run again. The two presidents have led the country for more than five decades (since 1967). The retroactive application of term limits has been a redline for opposition groups and protestors. Opposition parties also demanded other reforms, such as the reconstitution of the Constitutional Court and the Electoral Commission and a comprehensive revision of the electoral roll and constituencies.

The proposed amendments were a response to the unprecedented political crisis that has engulfed Togo since  19 August 2017, when Parti National Panafricain (PNP), founded in 2014 by Tipki Atchadam, organized the first protest to force the government to restore the 1992 Constitution and to bring an end to the fifty-year Gnassingbé rule. The security forces responded with excessive force and at least 16 people were killed and many injured. Shocked by the degree of violence, a coalition of 14 opposition parties (the so-called C-14), including PNP, was formed and almost weekly demonstrations were organised.

The ruling party, alongside its allied and satellite ‘opposition’ parties, now has the numbers in the new parliament necessary to avoid a constitutional referendum.

In a bid to quell the protests, parliament approved constitutional amendments in September 2017. Nevertheless, the opposition boycotted the parliamentary session and the ruling party could not achieve the 4/5 majority necessary to avoid a constitutional referendum. After long delays, in September 2018, the government announced that a constitutional referendum would be held on 16 December 2018.  However, it was postponed due to opposition protests. Nevertheless, legislative elections were held on 20 December 2018. Following the outcome of the  legislative elections, which the C-14 boycotted, the ruling party, alongside its allied and satellite ‘opposition’ parties, now has the numbers to achieve the 4/5 majority. It  has therefore indicated its plans to approve the amendments through parliament without the need for a constitutional referendum, therefore bypassing both the people and the demands of opposition groups.

Following the stalling of talks, in October 2017, the Togolese government sought the involvement of Ghanaian President P Nana Addo Dankwa Akufo-Addo in resolving the crisis. Akufo-Addo held the first meeting with opposition and government representatives in February 2018. The mediation started with two major obstacles, namely the release of political prisoners and the question of exclusion of Gnassingbé from future presidential elections. The opposition wants a return to Togo's 1992 Constitution, which sets a two-term limit for presidents, applied retroactively, to prevent Gnassingbé from standing again.

In realisation of the potential implications of the crisis to the security and stability of the region, the Heads of States of ECOWAS held an extraordinary Summit on 14 April 2018 in Togo. The Summit officially appointed Akufo-and Alpha Condé (president of Guinea Conakry) as ECOWAS Mediators to assist the pacific resolution of the crisis. The ECOWAS Commission was entrusted to take all necessary measures to support the mediators. Nevertheless, efforts could not achieve a positive outcome prior to the fifty third ordinary Session of the ECOWAS Authority of Heads of State and Government on 31 July 2018.

In the light of the report of the two mediators, the July ECOWAS Summit adopted a so-called feuille de route (roadmap) with clear recommendations. Among other things, the roadmap recommended the government to make institutional, electoral and constitutional reforms and to hold parliamentary elections. Specifically, ECOWAS urged the government to carry out a comprehensive revision of the voters´ register prior to the parliamentary elections. The Summit also recommended the reconstitution of the Independent National Electoral Commission (CENI) with the full involvement of all stakeholders and the possibility of the Togolese diaspora voting in their place of residence.

The ECOWAS roadmap necessitated the implementation of institutional, constitutional and electoral reforms before legislative elections.

Furthermore, the government and the political stakeholders were called upon to adopt constitutional reforms reinstating the two-round majority run-off voting system for presidential elections, two-term limit for presidents, and reconstituting the Constitutional Court. The ECOWAS Commission as well as the two facilitators were charged with following up on the implementation of the roadmap and providing technical assistance and expertise during the electoral process.

The essence of the ECOWAS roadmap necessitated the implementation of institutional, constitutional and electoral reforms before the organization of legislative elections. In addition, the roadmap emphasises consensus in the decision-making process concerning the reforms. Nevertheless, following the publication of the roadmap as part of the final communiqué of the July ECOWAS Summit, the government hastily and unilaterally started voter enrolment. This was done without reforming the Electoral Commission, which is composed solely of appointees of the ruling party. Thus, the C-14 called on the people to boycott the enrolling process.

Institutional, electoral and constitutional reforms are a precondition for free and fair electoral competition in Togo. Notably, to disadvantage the opposition in legislative elections, the electoral system systematically grants extremely unequal weight to votes depending on the location of the voter. The size of the electorate and number of seats across the 30 electoral constituencies varies. For instance, in the Golfe electoral district, an opposition stronghold, there were about 85 000 registered voters per seat in the 2013 elections. In contrast, in Binah, a ruling party stronghold, there were approximately 20 000 voters per seat. This inequitable electoral distribution has been criticised by the European Union's observation mission in previous elections. Moreover, the C-14 has demanded that the Electoral Commission must be reconstituted as agreed such that the opposition and ruling party will each have eight appointees, with an independent person serving as chairperson.

Meanwhile, draft constitutional amendments were proposed by an ECOWAS constitutional expert, which included a specific provision precluding presidents who have already served two terms. The draft could have addressed the main demands of the opposition. However, the government refused to adopt it.

The failure to implement the recommendations on institutional, electoral and constitutional reforms before the parliamentary election has undermined ECOWAS’s mediation efforts. The legislative elections were delayed from July to December 2018 partly to allow the implementation of the reforms. In the absence of these reforms, the C-14, which collectively won 40 per cent of the vote in the previous election,  announced the boycotting of the December 2018 legislative elections. Nevertheless, the government unilaterally organised the legislative election with the involvement of allied parties and some satellite ‘opposition’ parties. On polling day, there were more military forces in the streets and representatives of CENI at polling stations than voters. The voter turnout was barely 15 per cent in large cities, such as the capital Lome, despite the Electoral Commission reporting a turnout of more than 59 per cent.

ECOWAS has welcomed plans for the swift adoption of constitutional amendments through parliament, implicitly supporting the government’s version of the reforms.

Surprisingly, on 22 December 2018, the ECOWAS Summit welcomed the effective conduct of ‘free and transparent’ legislative elections on 20 December 2018, amidst peace and security, and in line with the ECOWAS roadmap. The Summit merely regretted the non-participation of the C-14 in the election. Crucially, ECOWAS also welcomed plans for the swift adoption of the reforms through parliament. This implicit support to the ruling party’s version of reforms is likely to undermine the resolution of the Togolese crisis.

According to the electoral results, of the 91 seats in parliament, the ruling party won 59 seats, UFC (Union des Forces du Changement), an allied party, 7 seats, independent candidates 18 seats and satellite ‘opposition’ parties 7 seats. Hence, despite the ruling party nominally losing a few seats, it dominates the new parliament and will adopt constitutional reforms, without the need for constitutional referendum. The government is now assured of having the required 4/5 majority in parliament to adopt its version of constitutional reforms. Gnassingbé, who replaced his late father in 2005 following constitutional manipulation and a contested and bloody election, is unlikely to be precluded from running for a fourth mandate in the 2020 presidential election and beyond, potentially extending the Gnassingbé family's reign over the country from 1967 to at least 2030. The opposition coalition are calling on the people not to recognize the new parliament and plan demonstrations to express what they call an ‘electoral hold up’.

In sum, the ECOWAS mediation may have been one too many in a country notorious for political dialogues without any real implementation. The mediation that should put an end to the crisis may be worsening it. Togo finds itself in a political deadlock after the legislative elections of December 2018. The political turmoil in the only West African country yet to experience a change of power has not ended. The opposition is seeking to remobilise the population to return to their original demands on the restoration of the 1992 Constitution with retroactive effect, which is the major bone of contention between the C-14 and the ruling party. This decline in democracy raises serious concerns not only for the Togolese, but also to the ECOWAS community animated by ideals of freedom, democracy and rule of law. There may even be a risk of contagion if the democratic fiasco in Togo succeeds and the Gnassingbé rule continues.

Possible middle ground solutions, such as allowing the current president to run for one more term only or for re-election after a one term break, do not seem to have gained traction.

The Togolese government was forced to request the mediation of ECOWAS because of the determination of the people and the large number of protesters during the August-September 2017 demonstration. Unfortunately, ECOWAS has not succeeded in convincing the Togolese authorities to observe principles of good governance and respect the rule of law. If consensus is not found on the critical issue of presidential term limits before the presidential election of 2020, one could fear the repetition of the events after Faure Gnassingbé perpetrated an unconstitutional change of government in February 2005. Possible middle ground solutions, such as allowing the current president to run for one more term only or for re-election after a one term break, alongside comprehensive reforms do not seem to have gained traction. Without agreement on these issues, or an unlikely but possible transitional government, the opposition may also boycott planned local elections.

Historically, presidential elections have triggered serious electoral violence. It is likely that the relative calm observed during the December 2018 legislative election will not obtain during the 2020 presidential election if the current president were to stand for a fourth term. Sustainable peace and a transition to democracy requires at a minimum the implementation of reforms that would guarantee the end of the Gnassingbé rule.

Dr Kangnikoé Bado is a Togolese researcher at the Max Planck Institute for Social Law and Social Policy, Munich, Germany.