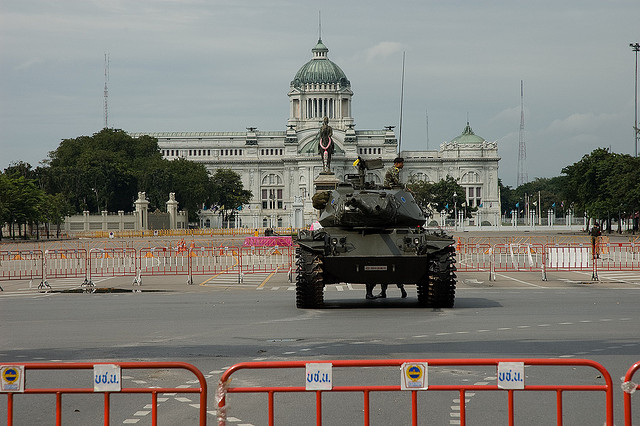 Thailand’s recent coup d’état might well be a setback for democracy, constitutionalism, and the rule of law, but many denizens still welcome the coup as an ostensible panacea to the political gridlock that has plagued the country in recent times. Former Prime Minister Anand Panyarachun’s praise of the Army-run National Council of Peace and Order (NCPO) for closing the country “for renovation” best reflects this sentiment.

The May 22, 2014 coup is not the first. Thailand’s military has a history of executing political interventions, especially in times of difficult political crises. It occupied the political epicenter during most of the Cold War decades. In 1991, it toppled a civilian government under Prime Minister Chartchai Choonhavan, and in 2006, it was Prime Minister Thaksin Shinawatra’s turn to be overthrown. Thaksin’s ousting was followed by a suspension of the widely acclaimed constitution of 1997 and its replacement with a new constitutional and political order.

However, military interventions in Thai politics have seldom been without just cause. The Army’s domination of the political landscape in the Cold War decades was seen as necessary to contain the danger posed by the spread of communism in Southeast Asia. After the Cold War, claims of corruption gave the military reason to stay in power. Recently, the public has quickly lost confidence in various civilian governments perceived to be weak and corrupt. The Chartchai government, for instance, was dubbed “the Buffet Cabinet,” portraying each minister feeding on a buffet of public projects. Thaksin’s overthrow in 2006 was preceded by years of corruption, cronyism, and bad governance, resulting in widespread popular protests that threatened to destabilize the country. The reasons for the May 22 coup were very similar – corruption, cronyism, and a series of misguided financial decisions at the expense of Thai taxpayers. The result was prolonged public protests in a politically charged environment and ultimately the Constitutional Court’s dismissal of Prime Minister Yingluck Shinawatra. This dismissal created a political vacuum which the Army took as a signal to step in.

In the Army’s eyes, the recent coup is part of the unfinished coup of 2006 against Thaksin, Yingluck’s elder sibling. General Prayuth Chan-ocha, Thailand’s new strongman, has vowed not to retire as long as the country’s political problems are not permanently resolved. Therefore, the Thai Army has apparently come to represent order, projecting a messianic image that appeals to a populace frustrated with lame and corrupt civilian administrations. But is this Army really the savior it is often perceived to be or just another opportunistic political actor? “It depends” seems to be the cautious answer.

The Thai Army’s performance has hardly fared better than that of the civilian governments they jettisoned from power. Corruption has remained a central feature of many successive juntas. The Army has refused to take action on suspected crimes within the institution itself. It has engaged in white elephant projects at the expense of the tax payer. Most often cited are General Surayad Chulanont regime’s  2007 procurement deal for a dysfunctional 350 million THB reconnaissance airship that was never used and Prime Minister Samak Sundaravej’s post-coup civilian regime’s purchase of GT200 bomb detectors that were ultimately deemed fraudulent. Thailand’s military is also generally perceived to be active in illegal businesses such as illegal logging, illegal arms trade, human trafficking, extortion, and even assassination services.

Further, some of the most brutal human rights abuses in Thai history have been conducted by the military or under military regimes. When fighting to contain communism in the 1960s and1970s, soldiers often summarily executed suspects without trial and burnt down entire villages in combat zones. The military orchestrated four massacres of democratic supporters in the heart of Bangkok at various times between October 1973 and May 2010. More recently, security forces stationed in Thailand’s Deep South are alleged to have been involved in extrajudicial killings, forced disappearances, torture, and even sexual abuses. Yet, no official actions have been taken to investigate these allegations.

During the 2010 crackdown, the army used live rounds, snipers, and armored vehicles, resulting in the deaths of protestors, innocent bystanders, and foreign correspondents. Six unarmed nurses were killed inside a temple. But the army commander defended the excessive use of force as justified. Only a handful of cases have been investigated. No soldiers have been arrested or charged for civilian casualties. The army refused to cooperate with any investigation, withholding needed information from the fact-finding commission. Moreover, the Army Commander intimidated critics with defamation lawsuits.

In an age where democratic civilian rule is the norm and any action that reverses this normative order is almost universally frowned upon, trying to justify coups and juntas may not always be an easy sell. Even those who may initially welcome it soon tire out as the Army consolidates its position and imposes its vision of governance, often at the expense of human rights and rule of law—essential ingredients for constitutionalism. Nonetheless—and without necessarily being an apologist of Thailand’s May 22 coup or any others previous— there is reason to avoid sweeping generalizations. In some instances, it is necessary to assess such developments in—amongst others— the light of the relevant country’s contextual specificities and the Army’s effectiveness in restoring order and ensuring a clear transition time frame for returning to democratic civilian rule.

Under the Thai context, military interventions have saved the country from descending into a civil war. In both 2006 and 2014, the country was clearly on the brink of anarchy. The long standoff between supporters and opponents of the Shinawatra regime resulted in massive shutdowns of the capital, grenade attacks, and gun fights. With no side backing off and the country becoming ungovernable, particularly after the constitutional court deposed Yingluck, only a radical solution such as military intervention seemed possible. Several actors and institutions, including the senate, the courts, top bureaucrats, and academics seemed to covertly or overtly wish for it. The military did not fail to pick up the cues.

To combat corruption in public administration, the Army has often embarked on restitutory measures such as asset freezing. Unless politicians are able to clarify their sources of wealth, these assets are deemed ill-gotten and confiscated. Politicians are also temporarily suspended from elections, although the effectiveness is questionable. In 1991 for instance, members of the Chartchai cabinet quickly returned to power as soon as democracy was restored. In 2006, executives of Thaksin’s Thai Rak Thai party were barred from politics for five years, but their relatives and spouses ran in elections as their proxies, rendering the ban meaningless. This time around, the NCPO rounded up members of both the government and opposition. They were released only upon signing a statement pledging to stay out of politics. Whether this will work remains doubtful.

The NCPO has also announced that it would eradicate mafias and purge the system of criminals. Amongst other measures, the NCPO is replacing executives of government-owned enterprises suspected of corruption. It has begun regulating illegal motorcycle taxis controlled by mafia groups, and reclaiming forest lands encroached upon by locals with the backing of local politicians or well-connected businessmen.

Yet, the Army will need to go beyond these measures if it is to deliver on its promises. Whether and how long it takes the junta to provide and implement a framework for a return to transparent democratic civilian rule is critical in how this coup will be assessed in the short to medium term. The recent takeover, as in the past, was followed by the imposition of martial law, leaving much wanting from a human rights and rule of law perspective.  An interim constitution is in the making, which is a good sign that there will be no constitutional vacuum in the interim, although it seems there will be no input allowed from beyond the inner circle of the junta.

Thailand has been here before, and it remains to be seen whether this time around democracy in Thailand will reap any long-term benefits from the short-term emergency actions taken by the military.