Taiwan’s Constitutional Court, Adultery and the Renaissance of Judicial Activism 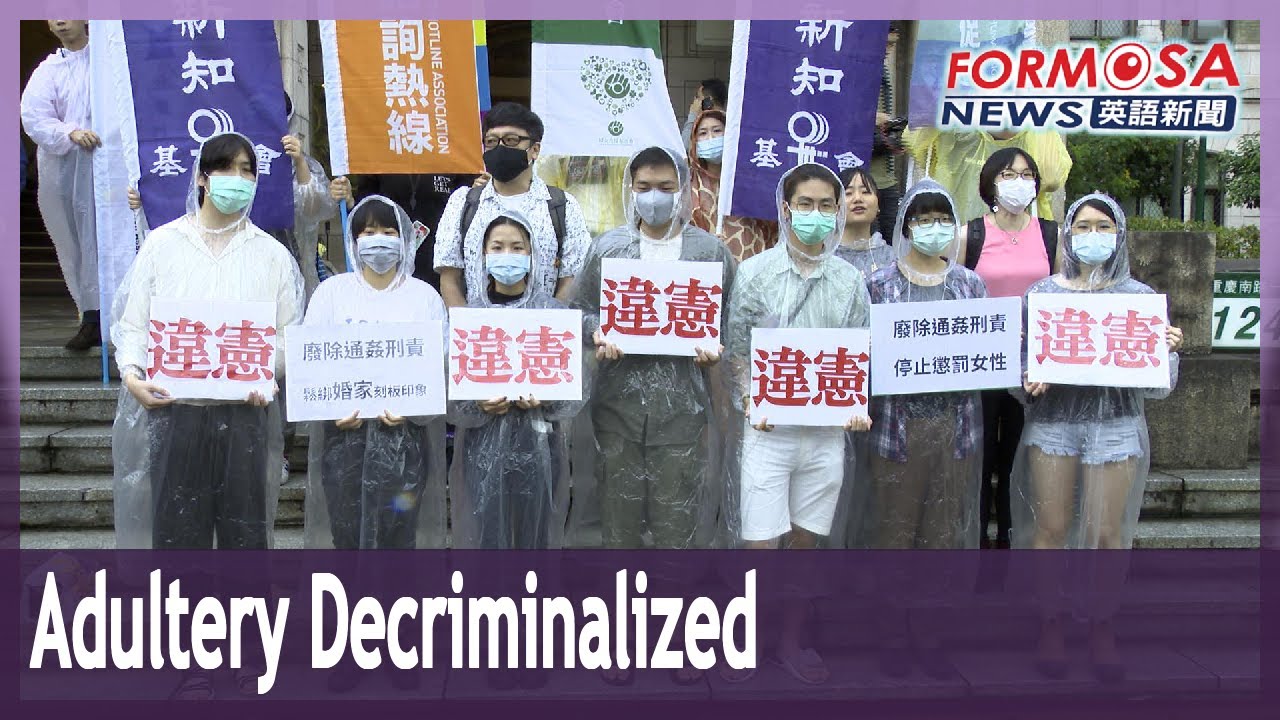 The decision of the Constitutional Court invalidating the criminalisation of adultery reflects a political tactic shifting controversial political decisions to the courts. Despite the popularity of criminal adultery, the Court seems to have avoided any significant popular backlash, while reasserting its central role in policy making – writes Professor Chien-Chih Lin.

A conservative tilt in a liberal Island

Since democratization, Taiwan has consistently received high marks in the domain of rights protection. Nevertheless, it had been one of the few genuine democracies that still treated adultery as a criminal offense. Since its enactment in 1935, article 239 of the Criminal Code (the impugned provision) punished adultery. Tens of thousands of people have been prosecuted and more than one thousand were convicted every year. The criminalisation of adultery remains popular, although declining. A public opinion poll, conducted by the government in 2013, suggested that more than 80 per cent of Taiwanese support the criminal adultery law. Another poll, done by an NGO in 2017, showed that 69 percent of the interviewee supported the criminal adultery law. Ironically, many of the supporters are women, hoping that their estranged husbands would be tethered by their broken marriages. Alternatively, they may use litigations to secure more lucrative divorce settlements.

Facing such an overwhelming support, the Court in 2002 endorsed the constitutionality of the impugned provision in Interpretation No. 554 on the grounds that ‘such restriction is essential in order to safeguard marriage, the family system, and the social order’. Furthermore, it maintained that the freedom of sexual behavior should yield to the duty of faithfulness between husbands and wives and that the impugned provision did not violate proportionality. Notably, this decision was unanimous, without even a concurring opinion.

The criminalisation of adultery remains popular, although declining.

In theory, the Court’s rulings are binding and final, subject only to review by the Court itself. The dust did not settle after the promulgation of the said decision. Instead, the issue of decriminalizing adultery has been raised time and again. Social groups, such as the women’s rights advocate the Awakening Foundation, have campaigned for the abolition of the impugned provision for decades. Although the law is ostensibly gender-neutral, they point out, women are more likely to be convicted than men in reality. Moreover, the law has been used to pressure victims of sexual assault not to file charges because of the threat of adultery charges.

In 2017, therefore, the National Congress on Judicial Reform, convened by President Tsai Ing-wen, concluded that adultery should be decriminalized. This conclusion, however, did not translate into legislative revision as a result of vehement opposition from conservative camps. This problem became more pressing after the Court issued its landmark Interpretation No. 748 in 2017 that paved the way for the legislature to legalize same-sex marriage in 2019. It is incoherent for the government to claim that Taiwan is a beacon of human rights in Asia while keeping and enforcing such an archaic and discriminatory law in the books.

Lower court judges, who firmly believe that sexual infidelity should not be criminalized, have continued to utilize constitutional petitions to air their grievances. Eventually, the Court was overwhelmed by an avalanche of petitions and decided to revisit this controversy in March 2020. It is important to note that the Court has been reshuffled multiple times since 2002, and none of the Justices who upheld the constitutionality of criminal adultery in 2002 is still on the bench. In contrast, 11 out of the 15 Justices have been nominated by incumbent President Tsai, who is more liberal-minded, compared with her predecessors.

On 31 March, the Court held oral arguments, in which it invited six criminal and constitutional law scholars to provide expert opinions on the constitutionality of the impugned provision. All six opinions supported the decriminalisation of adultery for a variety of reasons, such as proportionality, gender equality, and privacy. By contrast, the Ministry of Justice argued that the impugned provision was necessary to maintain and undergird the family and marriage system. Given the popularity of the impugned provision, even if the provision did not perfectly conform with the Constitution, it should be revised through the legislature instead of the Court, because of democratic accountability. Finally, two amicus curiae briefs with opposite stances were submitted, one by a former Supreme Court Judge in favor of the status quo and the other by an NGO leader that advocated abolition.

The Court notes, without alluding to specific evidence, that the society has become more liberal and diverse.

Nonetheless, the Court questioned whether there was no less restrictive means than criminalization to maintain the family system. It should be noted that adulterers will still face civil liability even if adultery is decriminalized. Finally, the Court weighed the benefit gained against the cost incurred and decided that the provision failed the balancing test. Adultery, the Court contended, does not have much to do with the public interest but the criminalization had caused serious invasion of personal privacy and sexual autonomy. As a result, the Court struck down this 85-year-old provision and overruled its 18-year-old precedent. Only one Justice issued a dissenting opinion, in which he insisted, among other things, that the legislature rather than the judiciary should have the final say over this policy change.

This decision has been hailed as a great stride towards gender equality in Taiwan. Nonetheless, it is not immune from critiques for the following four reasons. One of the major reasons is the counter-majoritarian difficulty, which suggests that judges should be reluctant to nullify legislation because they are immune from direct democratic accountability. This challenge is more critical in the context of adultery because the impugned provision has, as mentioned above, been consistently supported by an overwhelming majority of Taiwanese people for decades. Indeed, the Court is fully aware of this. In an overseas speech last year, Chief Justice Tzong-Li Hsu proclaimed that ‘We would say that Taiwanese society needs a break, so we keep the [adultery] case pending’ after issuing the same-sex marriage decision in 2017.

Second, the Court did not issue any suspension order or other remedial interpretation, a strategy it often applies in highly controversial decisions to prevent head-on conflicts with the political branches. In the same-sex marriage decision, for example, it granted the legislature two years to enforce its judicial mandate. Moreover, the legislature still has some leeway to determine how to protect sexual minorities. In this case, by contrast, the Court directly invalidated the impugned provision without further ado.

The decision focused on assessment of proportionality, rather than necessity.

Third, the Court struck down the impugned provision mainly because it failed the fourth subtest of proportionality: balancing. Although the Court has ratcheted up its use of proportionality in the past few years, it usually voids legislation at the necessity stage rather than the balancing stage. In fewer than 10 decisions has the Court predicated its conclusion on the balancing test, perhaps because doing so may be more vulnerable to accusations of judicial policymaking. In this case, however, the Court showed no appetite for elaborating on whether it was necessary to punish adulterous behavior to support the family system. Instead, it concentrated on the cost-benefit analysis of the impugned provision, arguing that the law did more harm than good.

Finally, the Court plainly overruled its own precedent—Interpretation No. 554. To be sure, this is not the first time the Court has changed course. In the past, however, it often chose to do so implicitly rather than explicitly, averring that it was ‘supplementing’ rather than changing its previous rulings. In reality, many of these supplementary decisions have essentially altered the precedents. It is unclear why the Court was reluctant to admit overturning, but one plausible explanation might be that the Court wants to maintain a façade of judicial neutrality and consistency.

These four reasons are interrelated and indicate that the Court has become more activist than it was. Two preliminary observations may account for this paradigm shift. From a supply side, the Court is composed of Justices that are progressive and assertive. Chief Justice Hsu, for example, has repeatedly brought the contribution of judicial activism and judicial lawmaking to Taiwan’s constitutional democracy to the fore. It should not be surprising that these Justices are willing to engulf themselves in the political vortex when they deem a law constitutionally suspicious. From a demand side, the judicialization of politics has become the norm rather than the exception in Taiwan. In other words, politicians voluntarily share the policy-making power with judges in order to shift blame when the issue is highly controversial. Specifically, both major parties in Taiwan have controlled the executive and the legislative powers at different times. They could have decriminalized adultery long time ago but are reluctant to do so for fear of dismaying their constituencies. Consequently, they thrust constitutional judges into a new role in governance in a deeply riven society.

The decision signifies the renaissance of judicial activism in Taiwan.

Unlike the aftermath of the same-sex marriage decision in 2017, and despite the popularity of criminal adultery, there seems to be relative popular indifference to the decision of the Court. Other that press conferences by two conservative groups criticising the decision, no parade has been organized or planned and no referendum proposal has been advanced to protest this decision.

In summary, the abolition of the adultery law not only witnesses the progress of rights protection but also signifies the renaissance of judicial activism in Taiwan. It seems that the Court’s role has oscillated between a ‘follower of the democratic zeitgeist’ and a ‘trailblazer in the changing political landscape’ since the dawn of democratization in Taiwan.

Chien-Chih Lin is an assistant research professor at Institutum Iurisprudentiae, Academia Sinica (Taiwan) and the executive editor of Academia Sinica Law Journal. He can be reached via [email protected]