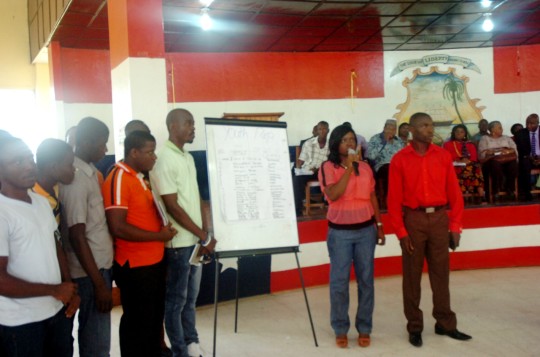 2014 will be recorded as a year of monumental challenges in Liberia’s post-conflict recovery. After 10 years of sustained peace and gradual return of basic social services in health, education and electricity, Liberians were becoming hopeful of a full recovery. Not only were social services being redistributed, the country’s democracy was on an unprecedented pace enjoying nearly ten years of uninterrupted constitutional democracy.

Sadly, as no one would have imagined, the Ebola virus invaded the country in the first quarter of 2014 disrupting normal activities in the ordinary lives of the people. Equally, it disrupted the economy, education, and strained the health system. Ultimately, normal state activities including constitutional processes that required social interactions and mass gatherings of people, for example political rallies were disrupted. The popular word at this time had been ‘quarantine’, which means isolation and restriction. Quarantining had been part of efforts to keep victims and suspected victims of the Ebola virus in an isolation ward for close monitoring and care. Individuals, households and communities, were quarantined as part of this process as the virus rages through the population.

In July 2014 when activities leading to Liberia’s senate elections were gearing up, the National Elections Commission announced that it could not conduct the elections on schedule due to the rapid rate of transmission of the Ebola virus. This was followed by a Presidential Proclamation of October 4, 2014 suspending the elections and mandating the National Elections Commission to hold consultations with stakeholders in rescheduling the elections. Ultimately, Liberia’s democracy was effectively quarantined in fulfillment of public health requirements.

This ‘quarantining’ of the democratic process would mean individuals could not canvas or campaign, and elections would be postponed until deemed safe by medical experts. With the virus still threatening communities up to October, it became clear that elections would not have been held anytime soon before January 2015 when 15 Senators end their constitutional tenure. But the consequences for not having the elections would have been a power vacuum in the Senate, potentially provoking an unprecedented constitutional crisis. This would have spelled bad news for a postwar country struggling with so many social and political challenges.  Already, just with the news that elections were postponed, and extra-constitutional measures under emergency powers were proposed by the government, panic and tension grew in the population. Local and international commentators predicted state ‘collapse’, ‘failure’, and ‘violence’ if the Ebola crisis and resultant social tensions were not timely contained. But Liberian politicians and local civil society organizations successfully foiled not only a potential constitutional crisis, but also revived hope and energy in the population. How did this happen? What does it mean for the country’s democracy and its constitution review process?

As national events unfolded between July and December 2014 with intrigues, uncertainties and prophesies of doom, Liberians made use of public consultations and available legal mechanisms to deal with the looming constitutional quandary of a power-vacuum. This has set the stage in my opinion for more credence to be given to local processes such as consultation through mobilization of local people around national issues for grounded legitimacy. Such processes help build consensus around issues even where there are disagreements and offer opportunities for stakeholders ‘to receive inputs from the general public discussion or from interest groups on contentious issues’. Second, where there were disagreements and legal complications, institutions of the government and national laws were sufficiently utilized where applicable to seek redress and find a way forward.  The simultaneous utilization of public consultations and national institutions and laws have proven successful and legitimate in the context of Liberia’s 2014 Senate elections, and therefore worth detailed attention in moving forward and resolving future political and constitutional crises.

Over the last few years, Liberian public institutions, supported by international organizations and particularly in fulfillment of international aid requirements, have adopted processes of social mobilization, participation and consultation of citizens in originating public policies and in making public decisions. This has been a common practice since the end of the civil war in 2003, and had gained currency since the return to constitutional order in 2006. Citizens’ participation and consultation was a key methodology in the development of the country’s Poverty Reduction Strategy, decentralization policy, the Vision 2030 and the ongoing process of constitution review. Thus it was easy to resort to the same local constituencies in finding a way out on the holding of Senate elections, when the Constitution seemed silent on the impasse created by the postponement of the elections.

The NEC adopted a strategy for nation-wide consultations with health authorities, interest groups such as youth and women movements, civil society and media organizations to seek their input in choosing a date for elections in line with the December 20 deadline. Consultations were also held with traditional leaders, religious organizations, as well as representatives from registered political parties, and local county officials.

The outcomes of the consultations were an endorsement of a proposed date of December 16 for the election and the advancement of a panoply of recommendations from participants on public health measures to be followed by political parties in conducting campaign activities and NEC during the conduct of the polls. Delegates from different interests or counties had specific needs and requirements all of which help the NEC to plan better. For example, there were recommendations for elections to be held in counties with low risks only, and deferred for counties with high risks should the situation not improve by December 16. Also some political actors and civil society organizations including the press union pushed for a consultative process at a national conference larger than the ones organized by the NEC with interest groups and citizens.

By the time the NEC had completed the consultations, the rate of transmission of the Ebola virus declined progressively and normal activities resumed in nearly all counties. Elections were finally held on December 20 and winning candidates certificated on January 3. This consummated the process of a successful de-quarantining of Liberia’s democracy through local consultations and utilization of national processes.

While Liberians have over time learned numerous lessons, particularly from difficult circumstances, the lessons from the events leading to the success of the 2014 elections, albeit dented in controversies, could be useful in deepening the country’s democracy. During the fight against Ebola, besides consultations on elections, community self-mobilization and organization went a long way in abetting government efforts to curb the virus. Local communities and interest groups have proven indispensable to the success of democratic processes and development in Liberia and the need for a national mechanism to sustain and improve on such cannot be overstated. How then can the state maximize benefits from such processes of local self-mobilization and deepen public participation in the ongoing constitution review process?

First, the need for government agencies or specialized commissions to engage with the public at all levels - local communities, interest groups and civil society - in developing public policies should be an obligation, not an option. And as Liberians have heard a loud silence of the constitution on a crucial national situation like the midterm elections, it has become imperative that the country articulates a general framework in dealing with issues on which the laws are silent. For example,  is it possible to a carve a constitutional framework that sets powers in the supreme court, the legislature or a public deliberative body to address key national questions that will emerge in situations where the constitution and statutes are silent? A nationwide dialogue is perhaps needed on this question.

Over the last two years the Constitution Review Committee has organized consultations in districts across the country, and reports are that views expressed are being analyzed to inform what goes into the draft constitution. The extent of engagements with local people and even national stakeholders hold the potential for strengthening the legitimacy of the outcome of the process. Such broader consultations would also give the CRC opportunities to at least understand the situations and concerns of the various social components of the Liberian state.

Finally, the commonality I have tried to draw between the Senate Elections and The Constitution Review process is that the success of the Senate elections - even in the midst of deep controversies - depended on popular consultations that charted its courses and set extra-guidelines in the wake of the Ebola virus disease; therefore, this should give renewed emphasis that the Constitution Review exercise can only succeed based on similarly serious and broad public engagement.