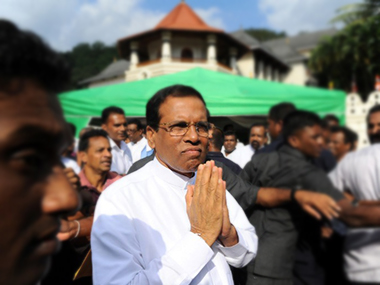 President Maithripala Sirisena (photo credit: AFP)
<p>The Sri Lankan Government is set to move a resolution in Parliament next month to convert the House into a Constitutional Assembly which will initiate the process of drafting a new Constitution and abolishing the executive presidential system.&nbsp;<span style="line-height: 20.4px;">The government has noticed the Parliament of the motion to convert the House into a Constitutional Assembly and it has&nbsp;</span><span style="line-height: 20.4px;">been placed in the parliamentary order book as upcoming business in the New Year, officials said.&nbsp;</span><span style="line-height: 20.4px;">The officials said the Parliament will be transformed into the Constitutional Assembly on 9 January when President Maithripala Sirisena is due to address the House to mark the beginning of his second ye
Read the full article here: First Post