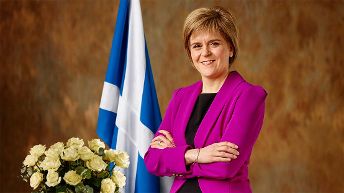 First Minister of Scotland, Nicola Sturgeon (photo credit: gov.scot)
Nicola Sturgeon has set herself on a collision course with Downing Street by asking the supreme court to rule on the legality of holding a new referendum on Scottish independence without Westminster’s permission. [...] In a statement at Holyrood, Sturgeon said that if the court ruled that it would not be a lawful use of her government’s resources or breached its constitutional powers, the Scottish National party (SNP) would make independence its only policy at the next UK general election. She told MSPs that would make the election “a de facto referendum” in which the SNP would be empowered to open independence talks with the UK government if it won a majority of votes. In the 2015 general election, the SNP won 49.97% of the overall votes in Scotland but 45% in 2019. [...] Sturgeon said her preferred date for staging the referendum was set out in a new referendum bill [...]. In her letter to Boris Johnson, she said she deeply regretted taking the step but that the prime minister had forced it on her by refusing to grant a section 30 order.
Read the full article here: The Guardian