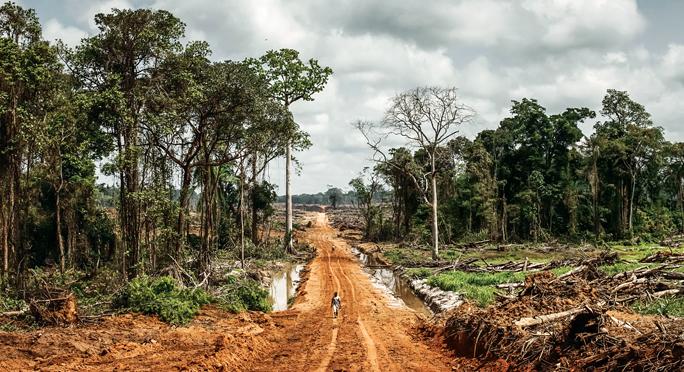 Unfortunately, property owners in rural communities have been treated unfairly over the years with respect to their ability to enjoy these rights.  The government’s drive to attract foreign direct investment and raise revenue has resulted in eviction and displacement of rural dwellers—many of whom have never possessed formal title deeds— from their resource-rich ancestral lands.  The practice since 1956 has been to consider all lands without title as public lands over which the State, as per a 1972 Public Land Law, reserves the right to grant concessions on. As most customary lands do not have titles attached to them, they are thus considered public land. Left out of the negotiation process or any direct right to benefit from the proceeds of such investment, rural communities have often been left only with promises of social development and local economic empowerment, none of which has ever been realized.  Aggravating this situation is the co-optation of rural elites and often illegitimate appropriation of rural lands by wealthy, influential Liberians with connections to the government for their private investments at the expense of poorer rural dwellers, for whom these lands are a source of livelihoods. Because as much as 70 percent (by IMF estimates) of these dwellers depend on agricultural and related activities on this land for a living, the appropriation of rural land has become a source of friction over many years between the companies and communities, and the State and citizens.

In 2007 for instance, violence broke out in Grand Bassa County, which lies in the West Central portion of Liberia, against the expansion project of the Liberia Agricultural Company. There have also been recent tensions between the Sime Darby Plantation and the people of Grand Cape Mount County.  In each case, locals contested the companies’ encroachment on ancestral graves and other cultural and religious shrines found on lands leased to companies for development. Many of these problems are attributable to a weak constitutional and an almost non-existent legal framework that takes into account the rights of rural people in land questions.

In 2013, the government approved a Land Rights Policy—the first in the history of Liberia to specifically address the land questions in detail. The policy has been criticized for some of its internal contradictions. For instance, the policy provides that customary lands shall enjoy the status of private lands but at the same time gives the government power to manage concessions on such lands. It also denies local communities full rights over resources attached to the land. It does, however, propose a number of important changes. It recommends more rights for rural people over community lands whether deeded or not. More specifically, Articles  6.2.2 and 6.3.2 propose that the right to use, possess and own natural resources on the land, as well as the rights to exclude all others (presumably the government as well) and to lease and or sell the property, should be included  amongst the bundle of rights  associated with customary lands. This is a significant development in one important respect. Under Article 22(b) of Liberia’s Constitution, the right to private property is guaranteed only to the extent that such right does not extend to resources, in particular, mineral resources in the land. According to some activists, this provision together with the ancient rule that all land without title is public land, have been the root cause of the predicament of rural land owners over the years as it has and continues to be the basis for government’s claims to large swathes of rural lands.

‘[It] lays the foundation for the exploitation of rural property owners by the state—a matter which requires urgent renegotiation’, says Mr. Ali Kaba, a land rights campaigner.

Giving these shortcomings in the existing regulatory framework—and in particular Article 22(b) of the Constitution, equitable constitutional land reform  in Liberia has come to be a key issue for many land rights campaigners across the country. In rural areas, many locals have taken advantage of the public consultation exercise held as part of the constitutional reform process to push the land issue to the fore.

‘People are concerned about companies using their lands without immediate benefits [to the local community] and want a mechanism in which they can have a say in concession agreements’, a source close to the Constitutional Review Committee (CRC) revealed.

Additionally, the need to share the benefits and proceeds of resource exploitation conducted by multinationals with government concession leases on their lands is a major concern. The 2013 Land Rights Policy is a right step in this direction.

The policy has been translated into a draft Land Rights Act waiting to be submitted to the Legislature. However, absent broader constitutional reforms, any law that emerges from this process will have limited effect, in so far as Article 22(b) of the Constitution remains in force. How far the government wishes to take ongoing discussions on constitutional reform in the direction of land and resource-ownership reform remains to be seen. This is because the government is not an entirely disinterested party in many of the controversies surrounding the land question, especially in so far as it relates to community and public land.  Since 1950, the State has been and remains highly dependent on royalties and land rental fees paid by multinationals to which it grants concession leases. For instance, some companies are currently paying at least five USD annually per hectare as land rental fees, in addition to other taxes imposed. Together, they have brought in about 19 billion dollars of foreign direct investment since 2006, according to a report by Columbia University in 2012.  Even if the State were to make concessions, another question that arises is how far can or should it go?  The government must balance the rights of local communities to land ownership and use of natural resources on their land and the danger of cutting off or diminishing a revenue source that is critical for running and maintaining the state.

A compromise must be reached, perhaps as part of a broader government decentralization initiative, where rural communities as well as other marginalized groups are given a voice in policy making through representative and strongly empowered local government institutions. But as I have written elsewhere, the jury is still out on the constitutional discussions around this question.  Finally, considering that the current constitution, which beyond the broad references to ‘property’ makes no specific reference to lands, one option to be considered as part of the broad constitutional reform discussions could be to look at recent constitutions elsewhere in Africa – for example the Kenya Constitution of 2010 – where all questions related to land, including customary land, has been given constitutional status.