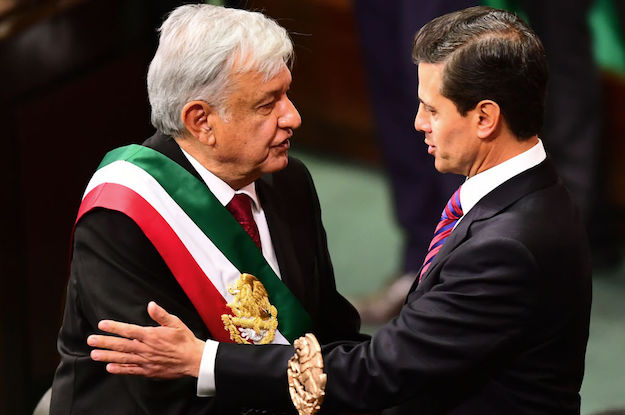 Mexico’s President Obrador is championing the introduction of a presidential recall referendum. While the possibility of recall could incentivize popular responsiveness and accountability that Mexico’s single term presidency may not sufficiently provide, the relative ease with which a recall referendum could be initiated may induce recurrent political instability – writes Roberto A. Cabrera y Rodriguez.

A year after Mexican President Andres Manuel Lopez Obrador won the presidential election in 2018, his proposed amendment allowing citizens to call for a referendum to remove the president was passed by both chambers of the federal legislature and is now awaiting the approval of the majority of state legislatures. As the President’s party controls the majority of Mexico’s state legislatures, the amendment is likely to be adopted. Mexico would be the fourth country with a recall process for presidents in Latin America, alongside Bolivia, Ecuador and Venezuela.

Since Obrador is the first left-leaning president in Mexican history, some are concerned that this constitutional amendment may pave the way for the president to increase his term of office, beyond the current six-year, single-term presidency. The concern is linked to experiences in several Latin American countries such as Bolivia, Colombia, Ecuador, Nicaragua and Venezuela, where presidents have sought to extend their terms. However, Obrador’s proposal goes in the other direction: it allows citizens to get rid of presidents who turn out to be corrupt or incompetent.

The proposed constitutional amendment is a double-edged sword. It would enable citizens to be more active in the political life of Mexico and enhance the public responsiveness of the head of government, but it could also set the country into a permanent campaign mode and potentially trigger recurrent political instability.

In order to understand the proposed new constitutional amendment, it is necessary to look back into the administration of former President Peña Nieto, which was marred by several corruption scandals and other critical failures. A property known as the ‘White House’ was reportedly given to his ex-wife by construction contractors who were in various tenders with the federal government; the Cuernavaca Express Pass highway project proved a financial sinkhole; corruption had become endemic in the state-owned petroleum company; and the creation of a triangulation system in the Federal Government misappropriated over $400 million. The government also used public resources to harass journalists, social activists and political opponents through a software package called ‘Pegasus’. During Peña Nieto’s presidency, violence rose and the economic fortunes of the middle class and the poor were badly affected. However, the single most important event which destroyed his popularity was the case of Ayotzinapa – the disappearance of 43 students – which happened in the third year of his presidency.

Despite the numerous scandals during Peña Nieto’s administration, there were limited opportunities to remove or replace him, other than a cumbersome impeachment procedure. Consequently, the presidential recall amendment became one of Obrador’s most popular campaign promises in the 2018 presidential elections.

The mechanics and potential benefits of the recall amendment

Under the amendment, a presidential recall can only be requested once during a president’s six-year term, and only after the first three months of the third year of the presidency. It is not clear whether a recall may only be requested exactly between 36 and 39 months of a president’s term, or whether it is possible until the end of the term of the president. Supporters of a recall must produce a petition backed by at least 3% of the Nominal List of Electors, distributed across at least 17 of the 32 federal states. After these requirements are fulfilled, the National Electoral Institute has 30 days to verify and organise a referendum, which must not coincide with other elections.

A recall referendum would be successful under two conditions: 1) at least 40% of the citizens on the Nominal List of Electors have participated; and 2) a majority of votes cast favour removal. The result of the revocation process can be challenged before the Federal Electoral Tribunal.

The proposed amendment is not clear on whether the two houses will sit jointly or in separate sessions for the purpose of selecting a replacement president.

If the president is removed, the President of Congress – who is the president of the of the Chamber of Deputies – takes over as interim president. Within 30 days, the chambers of deputies and senators would choose who will complete the presidential term. The proposed amendment is not clear on whether the two houses will sit jointly or in separate sessions for this purpose. Under the interpretation of article 83 of the Mexican constitution, no one who has held the office of president of the republic may hold that position again for any reason. This means that the president who loses in a recall referendum cannot be president again. The replacement president would also arguably be precluded from running for president again, regardless of the length of her/his presidency, which could make the replacement role unattractive for qualified but ambitious persons.

The introduction of a recall referendum is significant in the Mexican political system and could ameliorate hyper-presidentialism and enhance democracy. Since 2000, Mexican hyper-presidentialism has been losing steam and this reform could further weaken it. Under the current constitutional framework, the only mechanism to remove and sanction a sitting president was under Article 108 of the Mexican Constitution where the president ‘can only be charged for treason against the country and serious crimes of the common order’. If found guilty, the president is removed from office through the impeachment process. However, this has never happened in the past.

Mexicans often lament that democracy is limited only to the presidential election day. Normally, the intermediate elections in which deputies and mayors are elected see low voter participation. This reform, giving the possibility that the president can be evaluated in a referendum, could make citizens more active and more interested in public issues, therefore enhancing the legitimacy of the overall democratic dispensation.

Procedurally, the proposed recall referendum is strict enough to discourage frivolous attempts at undermining a legitimate president, while allowing the possibility for removal of exceptionally bad or unpopular presidents. First, a referendum to revoke the president’s mandate can only be held three months into the second half of the presidential term, providing enough time to assess if the president is corrupt or incompetent. Second, collecting 3% of the Nominal List of Electors from at least 17 of the 32 states is cumbersome enough but achievable through a well-organised signature collection. Third, the fact that the National Electoral Institute, an autonomous constitutional body overseeing elections, would be charged with conducting recall referendums would guarantee the impartiality and legitimacy of the referendum process. Fourth, since the participation of at least 40% of the citizens registered on the Nominal List of Electors is required, this might encourage people to participate when a president is doing extremely bad. Applying a minimum percentage avoids the possibility that only a small segment of the population removes a legitimate president, potentially inducing constitutional and political instability. The number is also not unreasonably restrictive considering that normally around 60% of registered voters vote in presidential elections. The turnout requirement and the need for an absolute majority support of those who vote for a successful recall referendum would encourage citizens to actively participate.

It is impossible to know how the presidents who have ruled Mexico since 2000, when the opposition presidential candidate won for the first time in Mexico since 1910, would have fared had they been required to face a recall referendum. Nevertheless, the levels of popularity and the percentage of votes obtained by each president in the various election provide a useful hint.

Assuming that the 40% turnout threshold would have been achieved, the only president who would have finished his term without the possibility of losing a recall referendum would have been Vicente Fox (2000-2006). Fox ended his term with a 63% approval rating. Enrique Peña Nieto (2012-2018), by contrast, would have found it difficult to complete his six-year term. From the second quarter of his fourth year, his approval rating was less than 36%, and it declined further to 16% by the end of his term. With respect to Felipe Calderon (2006-2012), the outcome would have been uncertain as from his third year his approval levels fluctuated between 41% and 57%.

As the power to select the replacement president belongs to Congress, if the opposition controls the legislature, it would have significant incentives to initiate a recall referendum.

If we measure the possibility of a recall referendum based on the percentage share of votes of the presidential candidate of the party of the outgoing president obtained in the next election, none of the presidents would have won such a referendum: Fox 35.91%; Calderon 25.39%; Nieto 16.14%. Accordingly, if this reform had existed since the beginning of the 21st century, the chances of recall of the three former presidents would have been high. This would have caused a constitutional and political crisis and instability.

In particular, as the power to select the replacement president belongs to Congress, if the opposition controls the legislature, it would have significant incentives to initiate a recall referendum, as the substitute president would be selected by Congress, therefore providing an indirect way to control the presidency. Between 1994 and 2015,  no presidential coalition had more than 40% in the chamber of deputies, which would have increased the chances of recall referendums. Such repeat and successful recall referendums would have damaged the legitimacy of the executive in the second half of each presidential term.

Accordingly, despite President Obrador’s good intentions, the recall referendum could encourage political instability, particularly when the opposition controls Congress, or have limited impact in policy changes, when the president’s party controls Congress.

After the abuses of power of several former presidents, the proposed introduction of a presidential recall referendum may be understandable. While the process would open the possibility that very few future presidents will finish their mandate and empower political party elites in influencing the selection of a substitute president, it might also make democracy more participatory and reinforce limits on hyper-presidentialism. Overall, the recall process is designed to provide outlets for removal of exceptionally underperforming or otherwise unaccountable presidents. The value of the amendment may lie not so much in the removal of presidents, but rather in discouraging exceptionally bad behaviour, action or inaction among incumbents, therefore incentivizing a sense of popular responsiveness and accountability that Mexico’s single term presidency may not sufficiently provide. Nevertheless, the relative ease with which a recall referendum could be initiated may induce political instability.