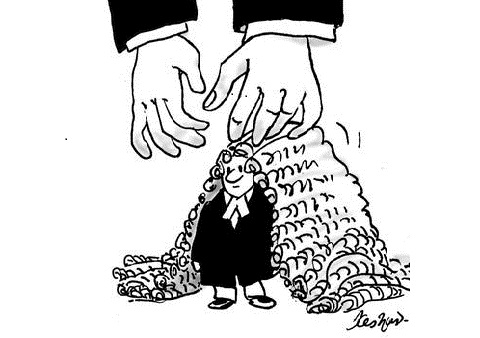 The Indian Supreme Court’s recent decision to strike down a constitutional amendment that proposed a federal commission for judicial appointments must be regarded as among the most important in its history. The Court exercises an unusual degree of control over how the higher judiciary is staffed, and the decision confirms that this control will remain. The decision threatens to impact relations between the judiciary and the legislature-executive, and the Court has already received wide-ranging criticism. India’s Union Finance Minister, who is also one the most distinguished members of the bar, raised fears of the “tyranny of the unelected”.  Commentators have been hardly less moderate, referring to the verdict as “anti-constitutional”. But it would be a mistake to see the decision in such terms. Within this narrative, the judiciary

distrusts politicians, seeks to have complete control over its institutional functioning, and puts brakes on any drive towards accountability. It is, the story tells us, a self-contained, opaque body, with powers that are many but checks that are few. This narrative is tempting in part because the Indian judiciary has lost considerable legitimacy in recent years and major concerns have been raised about its capacity to self-regulate. But it would be a mistake to see the Court’s recent decision in institutionally self-regarding terms. The decision engages with important and difficult questions of principle, and it is above all else a defence of judicial independence within India’s constitutional framework.

The Collegium System – With or Without?

Under Articles 124 and 217 of the Indian Constitution, judges of the Supreme Court and High Courts are to be appointed by the President in “consultation” with the judiciary. In a series of decisions in the 1990s, the Supreme Court interpreted the word “consultation” to hold that the judiciary must play the pivotal part in the appointment process. The second of these cases, in 1993, created the “collegium system” whereby the Chief Justice and his senior colleagues would propose appointments, which were then to be affirmed by the executive. Among other things, the scheme emphasized internal deliberation and decision-making within the judiciary. Since its inception, the collegium system has invited concern and debate, along with various political efforts at increasing the legislative and executive role in the appointment process. In 2014, such efforts took concrete shape with the enactment of the Ninety-Ninth Amendment to the Constitution and the National Judicial Appointments Commission Act. These measures jettisoned the collegium system and put in place a commission for the appointment of judges. Such changes were challenged earlier this month, when a 4:1 majority of the Supreme Court held that they infringed upon judicial independence and thereby fell afoul of India’s basic structure doctrine. The doctrine, which is now over four decades old, places substantive limits on Parliament’s power to amend the Constitution and empowers the judiciary to strike down amendments that damage or destroy the basic structure of the Constitution. Since its inception, amendments have for the most part been upheld, the primary exception being amendments that curtail the judiciary’s powers of review or its autonomy.

An important step in the Supreme Court’s decision was its clarification of the existing appointment scheme. The extant collegium system did not give the judiciary exclusive and complete power over appointments, as its critics had alleged. What it instead did was to provide for judicial primacy. In defence of this claim, the Court relied upon the government’s own memoranda for Supreme Court and High Court appointments, issued in 1999, which gave details of how appointments were to occur and revealed that the executive had a part to play in the process. This step reframed the question at hand. The question was not one of exclusivity; it was whether judicial independence required judiciary primacy in the appointment process.

Part of the state’s argument in defence of the impugned measures was historical. The founders of India’s Constitution never sought to make judicial appointments the privilege of the judiciary. They envisaged a role in which the judiciary would, quite simply and as the text stated, be consulted. The transfer of power to the judiciary and its dominance in appointments was a betrayal of that historical intention. There is undoubtedly some merit in this argument, but the Court’s response showed the problems with such reliance on historical intent. Rather than rejecting the use of history, the Court cleverly used the historical material differently. It relied on it at a higher level of abstraction, arguing that B. R. Ambedkar’s principal concern in determining the appointment process was to ensure judicial independence. The Court changed the historical question that was to be asked: the question was not who should appoint judges, but rather which constitutional principle was most sacred in determining the appointment process. Ronald Dworkin once observed that there was “no such thing as the intention of the framers waiting to be discovered, even in principle. There is only some such thing waiting to be invented.” The Court’s strategy here was brilliant and ingenious, and it is hard to think of a better case in which a reading of the arguments on either side confirms Dworkin’s truth.

A second kind of historical argument considered appointments prior to 1993. There was nothing objectionable, the state argued, about such appointments, and the period before the creation of the collegium system confirmed that an alternative system for appointments need not come at the cost of judicial independence. But here, too, the Court had an answer to offer. In most instances prior to 1993, the executive had paid the judiciary the importance and respect it was due, and thus the judicial view had de facto prevailed. The judgments in the early 1990s merely codified and provided structure to an existing constitutional convention, a task that was required because of select but egregious instances in which the executive misused its formal legal power to appoint. Justice Lokur in fact suggested that judicial primacy in appointments had existed since the colonial Government of India Act 1935, taking the state’s historical claim and turning it on its head.

The majority argued that the composition of the proposed National Judicial Appointments Commission violated judicial independence. The Commission was to include six members: the Chief Justice of India, two senior Supreme Court judges, the Union Minister for Law and Justice, and two “eminent persons”. Under the scheme outlined, Justice Khehar noted, “the two eminent persons are sufficiently empowered to reject all recommendations, just by themselves”. Further, they “would also have the absolute authority to reject all names unanimously approved by the remaining four members”. The “vesting of such authority in persons who have no nexus to the system of administration of justice” would, he noted, be “clearly arbitrary”. The role of the Union Minister for Law and Justice was similarly attacked by the bench. His inclusion was thought to raise major conflict of interests, given the extent of government litigation before the Court. Justice Lokur noted further that entrusting the Union Minister with such a role “casts a doubt on the principle of cabinet responsibility”. What the impugned measures did was to transform “the mandatory consultation between the President and the Chief Justice of India to a dumb charade with the [Commission] acting as an intermediary”. If such a change didn’t violate the Constitution’s basic structure, nothing did.

Doubtless, the Court’s reasoning rested upon a judgment of how the Commission was likely to work; the bargaining between different actors that it would engender, and the pressures that might lead to the decisions it would eventually take. The state’s answer to this was that the Court must operate on the some degree of trust. The views of judges would be taken seriously, and the process would be genuinely deliberative. But the Court’s response followed the same logic: the collegium system too could be genuinely deliberative, and if judges could be given importance without primacy then so could the executive. Neither answer is a clear winner, but Indian constitutionalism does not allow the state to offer the Hobbesian authority counter. It cannot argue that it must have the authority to decide the question. By the very logic of Indian constitutionalism, if judges are empowered to review constitutional amendments then ultimately it is their prerogative to exercise judgment. And in doing so, they may choose to err on the side of judicial independence.

The judiciary has invited suggestions from the state on how the collegium system might be improved, and the days ahead will indicate the extent of such change. But whatever changes we might witness, they will be changes to an existing system; judicial primacy in the appointment process is here to stay. The Indian Supreme Court has offered important reasons for its decision, but by upholding its own power to appoint it has only increased the scrutiny that it will receive. India’s public institutions are in a race to the bottom, and the judiciary is an active participant in that competition. The collegium system arose out of excessive executive interference; it was made possible by the comparative institutional legitimacy that the judiciary enjoyed. The Supreme Court has done well to strike down the Ninety-Ninth Amendment, but it would do even better to look inward. The system it has preserved can last only so long as its legitimacy does.

Analysis
States Reorganization and Accommodation of Ethno-Territorial Cleavages in India Occasional Paper Number 29
by external source
Analysis
Constitution-building in states with territorially based societal conflict
by IDEA
Issue Paper
Interim Governance Arrangements: Comparative Principles and Practice for Myanmar
by IDEA
Guides and Handbooks
Beyond Representation in Pandemic Responses: Independent and International Institutions
by IDEA
More related resources …
ResourcesVoices from the field Interviews
Resources Voices from the field About ConstitutionNet