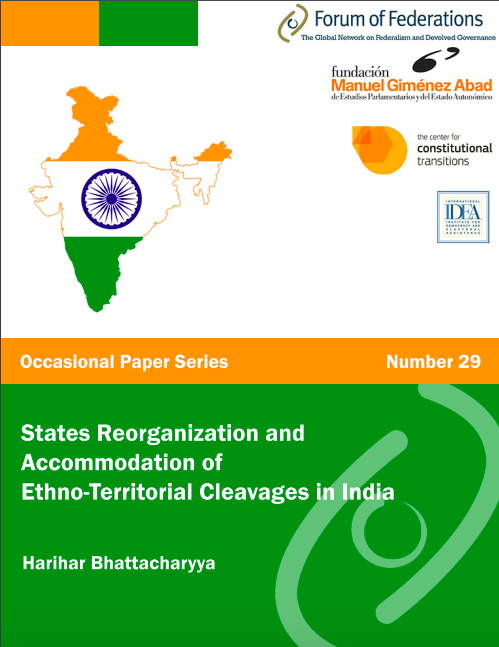 Forum of Federations, Fundacion Gimenez Abad, International IDEA and The Center for Constitutional Transitions are proud to present the 5th Occasional Paper which explores India’s re-organization and ethno-territorial cleaves in our special series on constitutional transitions!

What holds India, a vast multi-ethnic country, together in the midst of so many odds? The question is particularly significant because India’s unity and integrity has been possible despite democracy. The key to the above success lies in a mode of federation building that sought to continuously ‘right-size’ the territory of India. The method followed in doing so is called ‘states reorganization’ in India as a result of which ethno-territorial cleavages have been accommodated and regulated. The result has been durable ethnic peace and political stability. At independence (15 August 1947), India inherited nine provinces and over 560 princely states from the old colonial arrangements.

An interim state structure was put in place, but it was recognized that a fundamental restructuring would be required in due course. The process was complex and painstaking but managed to create sub-national units called ‘states’, mostly on the basis of language; subsequently non-linguistic ethnic factors were also taken into consideration. This Occasional Paper focuses on the process of ‘states reorganisation’ during the 1950s and 1960s, with some discussion of the subsequent processes notably of the strategically important North-East, which has seen various insurgencies. It provides brief ‘background’ to the process by highlighting the key constitutional and political issues before moving to the main core of the process and constitutional changes associated with the various reorganizations. It seeks to show in particular the nature of institutional responses of the Indian state to ethno-linguistic cleavages with particular attention to the States Reorganisation Commission.

The Occasional Paper also examines the outcome of these exercises and shows how ‘subnational autonomy’ became major incentives for the regional political elites. The linguistic ‘right-sizing’ of the subnational units, coupled with considerations of economic viability and administrative convenience, removed very early on a major source of ethnic conflicts in India. The paper also examines the comparative lessons learned and concludes with particular reference to the effects of India’s on-going neo-liberal reforms (post-1991) that have offered newer challenges for state autonomy and future territorial changes.