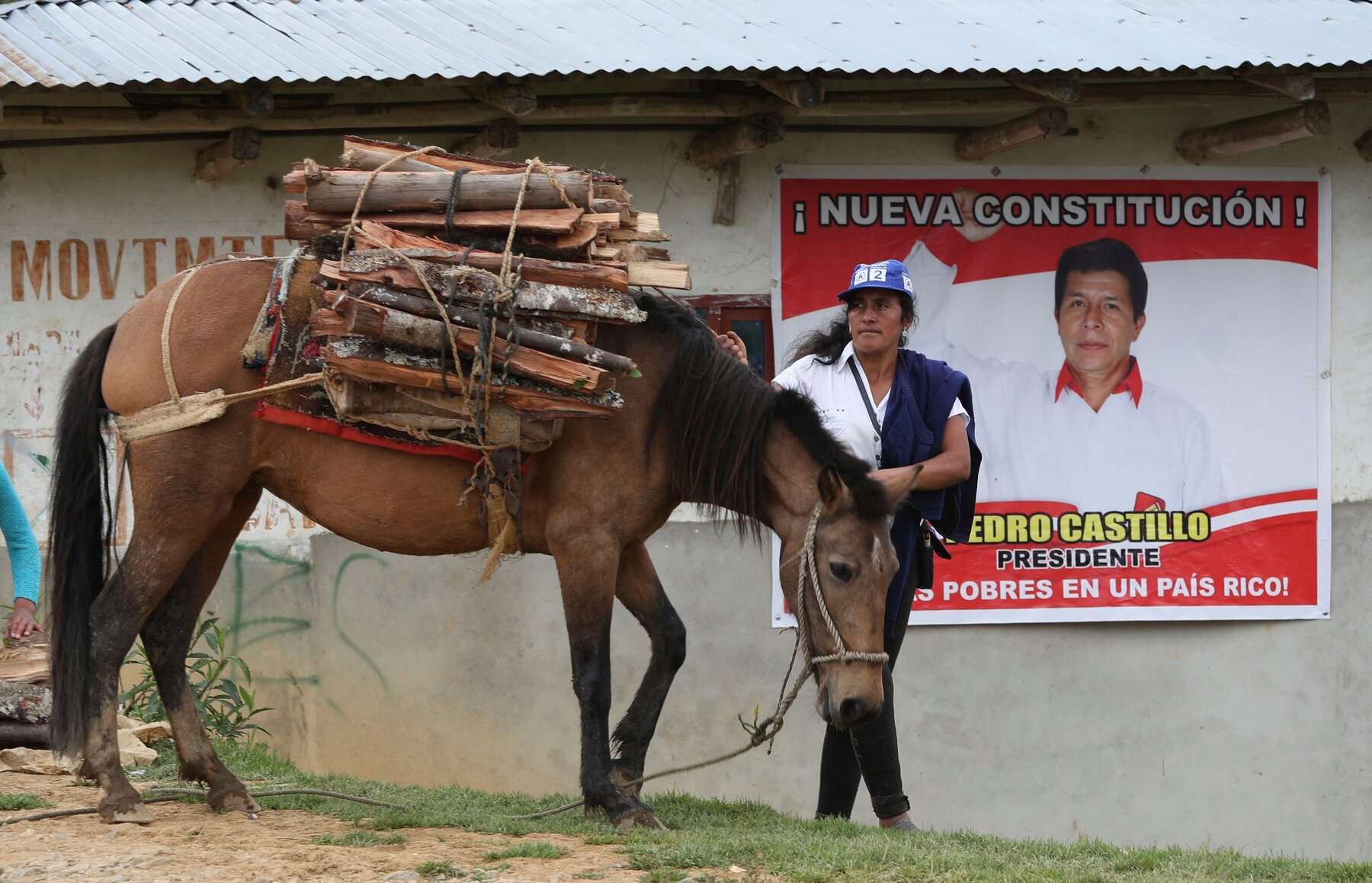 Pedro Castillo ascended to the Peruvian presidency with two key political aims: no more poverty in a country of rich people and a new constitution drafted by a national constituent assembly. The current constitution’s lack of legitimacy, combined with the Covid-19 pandemic that exposed the cracks in the present economic model, seem to point to the start of a constituent moment. This is despite the controversy between more moderate reformers, who aim to change the Constitution by following the established procedures, and those who, seemingly undermining the President, seek to achieve change through a referendum - writes Professor César Landa.

On 28 July 2021, the 200th anniversary of Peru’s independence, Pedro Castillo was formally sworn in as President after a victory of less than 1% and a delay caused by opposing presidential candidate Keiko Fujimori – daughter of the former dictator Alberto Fujimori – who rejected the result and alleged fraud, despite the National Jury of Elections recognizing Castillo’s victory. The swearing-in of Castillo – a primary schoolteacher in a poor Andean zone and political novice outside the political establishment – was met with denunciation by conservative sectors of society who oppose his left-wing agenda. Amidst the controversies that the President’s campaign promises and connections have generated, the most controversial is his push for a new Constitution to be drafted by a constituent assembly, as he claims that the legitimacy of the 1993 Constitution has expired.

Partial and complete constitutional reforms are not new to Peru. Since the beginning of our Republic, in 1821, Peru has had twelve different constitutions, which mostly followed changes in government, and served to legitimize new governments rather than to express the will of the people. Nevertheless, even though the current project of constitutional reform has become closely tied to the newly-elected Castillo government, proposals for reforming the 1993 Constitution have been percolating since 2000.

Moreover, the political instability of the last four years and the terrible impact of Covid-19 has led to calls from civil society to change the political organisation of the State in the Constitution.  Hence, it is crucial to analyse and debate whether the upcoming constitutional reform project responds to the will of the people or to the will of a President who seeks to legitimise his government, as has been done multiple times in the past. President Castillo’s leftist ideology, which he advertised in the first electoral round, only gave him 15.7% of the votes, forcing him to moderate his message and capitalize on the vote against Fujimori.

Hence, a sector of the population that voted for Castillo in the run-off election did so with the hope that the process of constitutional reform would be done by listening to the population, instead of pushing the Party’s agenda. In the case that a constituent assembly is created, a key factor to determine whether the President is following his own will or the will of the people will be the process by which the constituent assembly is formed and whether it is inclusive, also of previously excluded groups.

Cause for concern: dubious motives for previous constitutional overhauls

Observers in Peru (and Latin America) have a basis to mistrust proposed constitutional overhauls by incoming governments. The most recent example of ex-post legitimisation is the current 1993 Constitution, which was promulgated to signify the end of the Revolutionary Government of the Armed Forces (1968-1980) and the traces from the subsequent leftist governments, in favour of the neoliberal government of Alberto Fujimori (1990-2000).

The Constitution of 1979 favoured an active State role in the economic system as opposed to the 1993 Constitution, which restricted the role of the State as a promoter of wealth creation and protector of basic economic freedoms. However, in his first term, President Fujimori adopted the Washington Consensus and instituted wide-ranging neoliberal reforms. With the military’s support, Fujimori carried out a coup d´état in 1992, dissolving Congress and suspending the Constitution, a measure that was widely supported at the time due to the ongoing fight against two terrorist groups, “Shining Path” and “Tupac Amaru’s Revolutionary Movement”, and the economic crisis that the previous governments had left.

The current 1993 Constitution was approved by referendum in what was generally regarded as an exclusive and opaque process.

Fujimori then oversaw the creation of a new Constitution through an elected Constituent Assembly via a process that originated from the 1992 coup, and ignored the process established in the 1979 Constitution. After this, the 1993 Constitution was approved by referendum in what was generally regarded as an exclusive and opaque process. As such, a point often raised in public discourse is the illegitimacy of the 1993 Constitution as it was born from the actions of an autocratic government. Despite the fact that the Constitutional Court has already resolved a constitutional claim against the validity of the 1993 Constitution, this continues to be a key point in the debate. Besides the change in the economic model, the present Constitution enacted modifications to the political system which are still questioned today: for example, the change from a bicameral Congress to a unicameral one.

Forming a constituent assembly: through Congress or a referendum?

The current Constitution allows for its partial or total reform: it states that any reform must be approved by an absolute majority of the Congress (66 votes), which must then be ratified by a referendum or approved in two consecutive ordinary legislatures by two-thirds of the Congress. The high threshold needed for constitutional reform has meant that in the last 20 years, out of the 967 legislative projects to modify the constitution, only 20 were approved. And crucially, the Constitution does not provide for constitutional reform through a constituent assembly.

The political instability of the last four years that resulted in the proclamation of five different presidents in that time span has led to demands to modify Article 113 of the Constitution, which states the grounds for the President to vacate the office. Article 113 has been criticised for violating the principle of separation of powers and making it too easy for parliamentary opposition to remove sitting presidents, by stating that the President may be removed due to “permanent moral incapacity”. In the past five years the vagueness of this article has been exploited by the Congress to depose two Presidents and it seems that present-day Congress members are counting on exploiting Article 113 to depose Castillo.

As is evident, times of crisis amplify the desire for radical change and foment political polarisation. It is in this context that President Castillo ascended to the presidency with two key political aims: no more poverty in a country of rich people and a new constitution drafted by a national constituent assembly. President Castillo rose to prominence claiming that a new Constitution needs to be drafted to represent the interests of the marginalized socio-economic groups, a message that was mostly directed towards rural populations who voted for Castillo in the first round of elections with the hopes that Castillo would produce the economic change they desire.

Despite winning the Presidency, the margin by which he won against the daughter of former President Fujimori was very slim. As a result, Castillo is in a weakened position, with an opposition that fears that his proposals would hinder a return to the macro-economic stability that existed previous to the Covid-19 pandemic. Beyond this, many analysts consider him a puppet leader of Vladimir Cerrón, the leader of Perú Libre, the party to which the President belongs and which currently holds a plurality of seats in Congress.

At the same time, divisions within Perú Libre, between Castillo and the more hard-line members of the party – Guido Bellido, current Prime Minister, and Guillermo Bermejo, congressman known for mocking the concept of democracy in a leaked audio – have become apparent in the debate on the correct constitutional process for Castillo’s constitutional reform. In his inaugural speech, President Castillo announced that the will of the people should not be limited to an old constitution and that he sought to achieve the instalment of an elected constituent assembly.

But, President Castillo affirmed that he would follow the amendment process of the current Constitution, by first seeking a constitutional amendment to allow the creation of a constituent assembly. In contrast, Prime Minister Bellido, congressman Bermejo, and Vice President Dina Boluarte, who enjoy popular support and seemed to have allied with Cerrón, have all stated that they would seek the establishment of a constituent assembly through a citizens’ initiative, with Bermejo stating that the proposal for the constituent assembly would have to be adopted through a referendum, as Perú Libre has only 37 legislators in the 130-member Congress, which is not a sufficient majority to carry out President Castillo’s proposal. Despite the different stances, public discourse has not dwelled on the difference between Castillo’s proposal and Bermejo/Bellido’s proposal, but as expected these two stances continue to undermine President Castillo in his already weakened state.

Doubt remains on how governmental institutions would react in case an unconstitutional constituent assembly is approved via referendum.

In any case, doubt remains on how governmental institutions (like the judiciary and fourth-branch institutions) would react in case an unconstitutional constituent assembly is approved via referendum. Based on the National Jury of Elections’ respect for constitutional order in the past elections, it is unlikely that they would recognize a constituent assembly that is not approved according to the established procedures.

However, the controversy regarding constitutional reform is not only regarding the procedure: a recent survey revealed that 63% of Peruvians are in favour of partially modifying the Constitution, on issues related to the socio-economic regime, public health, and measures to fight corruption. President Castillo and other politicians from the left such as ex-presidential candidate Veronica Mendoza have stated that the current health crisis has exposed the failings of the economic system necessitating a new constitution. With Peru being one of the most affected countries by the Covid-19 pandemic, the attention has shifted towards the ability of the State to ensure health for its citizens, as well as the government’s failure to halt private sector price gouging for medical oxygen and even basic medicines. Most recently Castillo has stated that with a new Constitution he aims to tackle the “abuses of the monopolies,” especially regarding food production.

In general, it is difficult to gauge whether President Castillo’s proposal for a constituent assembly responds to the will of the people, and as such it is not clear whether we are facing a constituent moment. The exhaustion of the legitimacy of the 1993 Constitution combined with the Covid-19 pandemic, which exposed the cracks in the present model, seem to point to the start of a constituent moment, despite the controversy between more moderate reformers who aim to change the Constitution by following the established procedures and those who seek to achieve this change through a referendum.

The desire to modify the Constitution in the public discourse has mostly been linked to the political modifications needed to prevent another five years of political and social crisis. Beyond this, the media has been cautious not to place an emphasis on the desires of the rural population who voted for Castillo that a new constitution would be more favourable to their (economic) needs. At the moment the country continues to be polarised, with a lack of consensus regarding the possible modifications needed to build a more robust constitutional state ready to tackle future challenges, and with the possibility at hand that this process will be carried out without respect for the rule of law and the express wishes of the majority of the population.