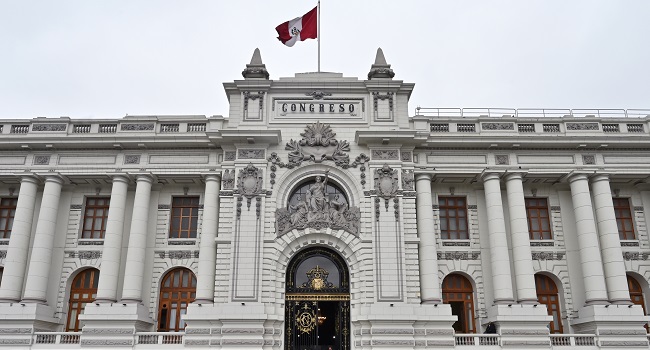 Congress of Peru (photo credit: Cris Bouroncle / AFP)
The Peruvian Congress rejected the constitutional reform bill by 49 votes in favor, 33 against and 25 abstentions. The constitutional reform bill allowed for early general elections to be held in 2023, as well as the shortening of presidential and parliamentary terms.  As it did not reach the 87 votes in favor needed to be submitted to a second vote in the next legislature, nor the 66 votes to be submitted to a referendum, "the constitutional reform law has not been approved," said the Congress president, José Williams. [...] The country is under a nationwide state of emergency, with curfews in 15 provinces, in the context of protests against the government of Dina Boluarte. So far, police repression has left 20 people dead, according to the Peruvian radio station RPP.  The people demand early elections for next year, the release of Pedro Castillo, the closure of Congress, the resignation of the president, Dina Boluarte, and a constituent assembly. Pedro Castillo has been detained since December 7 after being dismissed by Congress, following his failed attempt to dissolve the Parliament and establish a government of exception. Yesterday, the country's Judicial Power (PJ) ordered 18 months of preventive detention against him for the alleged crime of rebellion.
Read the full article here: TeleSur