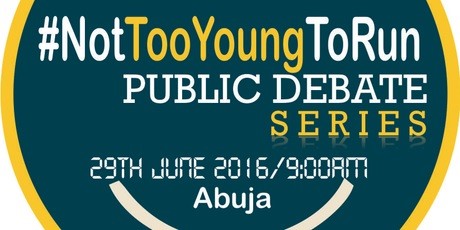 “When I grow up I want to become the President” is a phrase that many young people have said at one point in time or another during their childhood. However, in Nigeria, not many young people know that the Constitution of the Federal Republic of Nigeria 1999 (as amended) places a legal barrier to the aspirations of youth to run for but a few elective positions as contained in the Constitution.

Nigerian youth, between the ages of 18 – 35, as defined in Nigeria’s National Youth Policy and the African Youth Charter constitute approximately 70% of her estimated 180 million strong population.

The current Nigerian Constitution was introduced in 1999 following military intervention and designed by a constitution drafting committee, who thought that young people are too adventurous and can be too destabilizing if not properly contained.

Constitution review is a continuous process and has been on the front burner of national discourse since 1999.

The 6th Assembly successfully passed three sets of alterations (amendments) to the Constitution of the Federal Republic of Nigeria in the review process from 2007 – 2011.

The 7th Assembly (2011 – 2015), however, was not as successful as its predecessor despite the constituency hearings organized by the House of Representatives and the six zonal hearings held by the Senate to collate memoranda and views of Nigerians on what amendments should be made to the constitution. The proposed amendments made by the Constitution Review Committees of the National Assembly were not finalized and passed for assent before the life of the Assembly came to an end.

Throughout these amendment processes, young people have been actively organizing at different levels and have given rise to different social and political movements across the country to advocate for constitutional changes to meet the needs of future generations.

One of the most successful constitution amendment campaigns currently ongoing in Nigeria is the #NotTooYoungToRun campaign – a local campaign that aims to increase the number of young people running for office by lowering constitutional age limits for contesting elections.

In order to increase the participation and inclusion of young people in elective positions there have been series of consistent engagements by youth organizations like the Youth Initiative for Advocacy, Growth and Advancement (YIAGA) and the Youth Alliance for Constitution Review and Electoral Reform for the reduction of constitutional age limits for elective offices.  These have now become a national movement led by a critical mass of dedicated young Nigerians.

In 2012, Nigeria youths under the banner of Youth Alliance on Constitution Review and Electoral Reform (YACOR), a coalition of 30 groups, organized online (Twitter) conferences using the hashtag #ConstReview to aggregate the opinions of the youth population on the areas of the Constitution under review and produce them as a common position at the six Senate zonal hearings on constitution review as well as the constituency hearings organized by the House of Representatives. In a memo submitted to the National Assembly Committees on the review of the 1999 Constitution by the Youth Alliance on Constitutional Review the Alliance proposed to reduce the age qualification for contesting election to the office of the President, Governor, Senate, House of Representatives, State Assemblies and Local Government Councils.

In 2016, a bill with gazette number HB. 544 which seeks to alter Section 65, 106, 131 and 177 of the 1999 Constitution to reduce the age qualification for the Office of the President from 40 years to 30 years; Governor 35 to 30, Senate 35 to 30, House of Representatives 30 to 25 and State House of Assembly 30 to 25 was passed in the first and second reading at the House of Representatives before being sent to the Committee on Constitution Review.  This bill is very much inspired by, and supported by, the YACOR and similar youth movements.

The Senate of the Federal Republic of Nigeria also passed at first reading a separate constitutional amendment bill aimed at aligning the voting age of 18 with the eligibility age for contesting for political offices in Nigeria. The Bill with gazette number SB. 363 was read and passed for the first time during the Senate plenary on November 1, 2016.  This Bill seeks to alter Sections 65, 106, 131 and 177, of the Constitution to align the age eligibility for registering as a voter with eligibility for political candidacy in Nigeria.

The proposal in the #NotTooYoungToRun Bills before the National Assembly seeks to reduce the age qualification for the offices of the President, Governor, Senate, House of Representatives and State Houses of Assembly. Both proposals are founded on the belief that democratic development can only be achieved through inclusion, popular participation and providing equal opportunities for all groups and interests in a democratic society. Age limits are discriminatory and constitutional provisions that enforce age limits present a huge gap between the voting age and eligibility age in a young voting population.

The opposition voices to the campaign have refused to be silent, however, positing among other things that young people lack experience and maturity in holding elective offices as have gone as far as labeling the campaign and the bill as an ‘expensive joke’.

In rebutting the skeptics’ narrative against the #NotTooYoungToRun , supporters of the bill argue that age limitations can no longer hold sway in a time and age of globalization, technology and the ever-evolving dynamics in global politics.

Inspired by the youth movements in Nigeria, the #NotTooYoungToRun campaign has now gone global.  On the On 22 November 2016, the Office of the Secretary-General’s Envoy on Youth (OSGEY), the United Nations Development Programme (UNDP), the Office of the High Commissioner for Human Rights (OHCHR), the Inter-Parliamentary Union (IPU), the European Youth Forum (EYF), and YIAGA launched the #NotTooYoungToRun Bill as a global campaign at the first Forum on Human Rights, Democracy and the Rule of Law in Geneva, Switzerland. This is an open campaign that anyone can join to support young people's right to run for office around the globe.

According to a 2015 Afrobarometer survey, on average, fewer than half of African youth made contact in the preceding year with their local government councillor, the closest on-the-ground leader that average Africans would engage with regarding services or other problems. This is indicative of the disconnect between young people and politics. While there has been widespread support for the Campaign, there have been questions on how exactly to participate in formal political processes.

Youth voice and engagement are fundamental aspects of democratic consolidation, as tomorrow’s leaders must be active participants in today’s decision-making processes. Since 2012, youth movements in Nigeria have learned that in order to increase the participation of young people in constitution review processes, youth voices must be truly represented as well as innovative and relatable strategies must be employed. The Campaign hashtag, ‘#NotTooYoungToRun’ is catchy and resonates with the youth population. Digital platforms have also stimulated active participation among young Nigerians.

The internet and social media provide an ever-expanding menu of opportunities which facilitate youth engagement in public life.  In Nigeria, an online petition has been gathering signatures to ensure that youth voices are heard, and the age limits are reduced. Online conversations have been held at different times led by young people who support and stand against the #NotTooYoungToRun Campaign; a campaign website and mobile application also provide updates on the Campaigns progress; pin-up badges, placards, information leaflets and a campaign magazine also serve to increase support and advocacy for the campaign in Nigeria.

In order to move from action to impact, that is for the constitutional amendment to become law, young people must organize and take action in the form of contacting legislators and asking them to support and vote in support of the #NotTooYoungToRun bill; participate in public hearings and constituency engagement on constitutional amendment; prepare and submit a memorandum to the National Assembly Committees on Constitution review in support of the bill; organize an advocacy visit to legislators; mobilize youths and youth organizations for a rally to the National Assembly or State House of Assembly; debate the principles of the Bill within networks using online and offline platforms.

Kofi Annan, former Secretary-General of the United Nations stressed the importance of youth not only as future leaders, but as actors of society today, with a direct stake in the development process when he said, “No one is born a good citizen; no nation is born a democracy. Rather, both are processes that continue to evolve over a lifetime. Young people must be included from birth. A society that cuts itself off from its youth severs its lifeline; it is condemned to bleed to death.”

Ibrahim Faruk is currently a Senior Programme Officer with Youth Initiative for Advocacy, Growth and Advancement (YIAGA)in Abuja, Nigeria where his work focuses on youth political participation, advocacy and non-violence. Ibrahim also serves as the Coordinator of the #NotTooYoungToRun Campaign in Nigeria. He holds a B.Sc. in Political Science and M.Sc. in Conflict Management and Peace Studies from the University of Jos, Nigeria. He can be reached via email: [email protected] and tweets @IbrhmFaruk